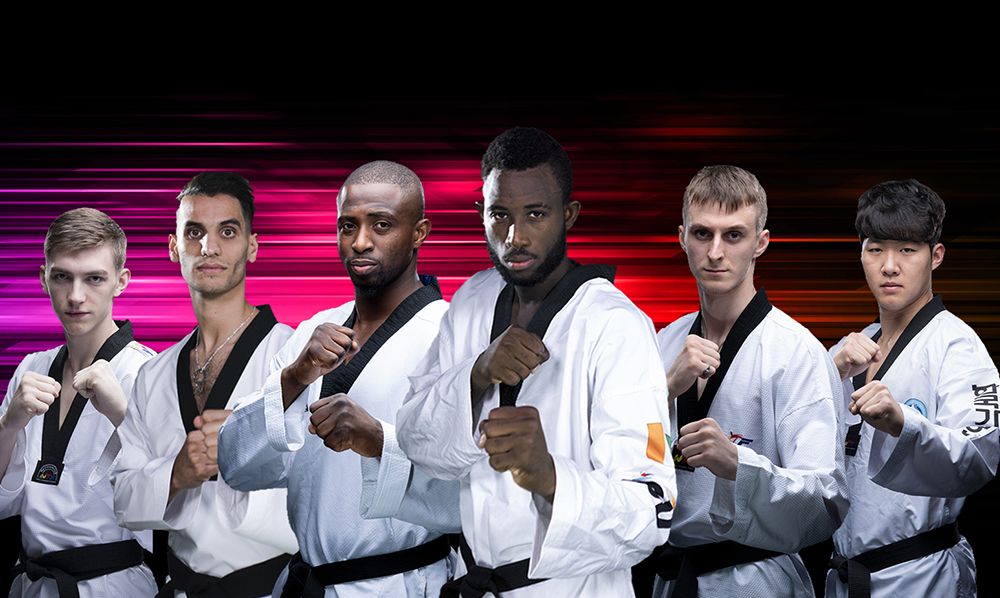 That is impossible to say, but in a special preview below we look at some of the key contenders in the Men -74kg, -80kg, -87kg and +87kg categories.

In the -74kg division, there is no clear winner in sight since, according to the latest registration status, the top gun, Russia’s Maksim Khramtcov – who won gold at the last World Championships in Muju – has moved up in weight.

That means Nikita Rafalovich of Uzbekistan, who won two silvers in the last two Worlds, is now top world-ranked. Ahmad “The Desert Wolf” Abughaush, the Rio 2016 gold medalist is a variable. Having shifted up in weight, from -68kg, the Jordanian could be dangerous, but will be at the smaller, shorter end of the category in Manchester.

The towering Egyptian Seif Elssa is a frequent medalist in the Grand Prix and wields a height advantage, while Iran’s Amir Mohammad Bakashi won gold in the 2016 Junior Worlds, and is now a consistent senior. Belgium’s Badr Achab, and Russia’s Dmitriy Artyukhov, are also in with a chance.

In the Olympics it is always hard to predict who will come out on top at this weight, and it is equally difficult at the Worlds. However, it contains some of the most exciting fighters in the game.

The obvious answer is Cheick Sallah Cisse, Olympic gold medalist in 2016 and the top world-ranked player. However, he will have a battle on his hands if he meets the stylish No. 2 world-ranked player, Azerbaijan’s Milad Beigi Harchegani. Cisse is an always- offensive player who wields an excellent front leg kick, while Beigi Harchegani is fast and is armed with a flexible and dangerous head kick. If these two warriors meet in the final, it will be a battle of Cisse’s endless attacks against Beigi Harchegani’s tactical nous.

Still, there are other players who are hungry for a win – most notably Moldova’s Aaron Cook. The crowd-pleasing spin kicker and power fighter is highly experienced.

However a dark horse has entered the category – Russian superstar Maksim “The Red Machine” Khramtcov. The world champion in the -74kg category at the 2017 Muju Worlds, the highly entertaining, unpredictable and unorthodox fighter was arguably the top men player of the 2018 season. As such, the Russian could very well take victory in this category away from either Cisse or Milad Harchegani – or both.

Team Russia’s Vladislav Larin is the obvious choice in this division. He has solid basic skills – he is powerful, he is unusually fast for his weight and he has a wide range of techniques. A frequent gold medalist, he can win on any given day. He won bronze at the 2015 Worlds in Chelyabinsk and silver at the 2017 Worlds in Muju.

Other players say he is a heavy kicker, which drains their energy in combat. Not many players can match him, but one who very obviously can is Alexander Bachmann, the German who beat Larin in a surprise victory in the finals in Muju. That having been said, Larin has been far more impressive than Bachmann in the seasons since.

The heaviest category in combat sports always grabs the crowd’s imagination – and so it is in taekwondo. But it is tricky to predict who will emerge on top, given the lack of a single dominant fighter.

What is clear is that, historically, the Africans and Europeans have the advantage over Asians. However the top world-ranked player this year is an Asian: Korea’s Kyo-don In. He is fast for the category and ambidextrous, but he is smaller than the other big men. Though he boasts impressive stamina, he will be fighting against bigger opponents in the preliminaries, which will sap his energy.

The towering “tallkwondo” fighter Abdoul Issoufou of Niger was the silver medalist at Rio in 2016 and the gold medalist at Muju in 2017 and remains on solid form: He could make it two in a row. Then there is 2016 Rio Olympic champ Radik Isaev of Azerbaijan, who has not been active on the circuit recently, but remains a definite threat.

And there are others who could easily take it. Mahama “It’s Cho Time” Cho of Team GB who won silver in Muju and Iran’s highly professional Sajjad Mardani is a consistent threat and frequent medalist on the Grand Prix circuit. Uzbekistan’s Dmitri “Shock Force” Shokin of Uzbekistan is also strong contender, while Gabon’s Anthony Obame is a power fighter who is always dangerous in this category.