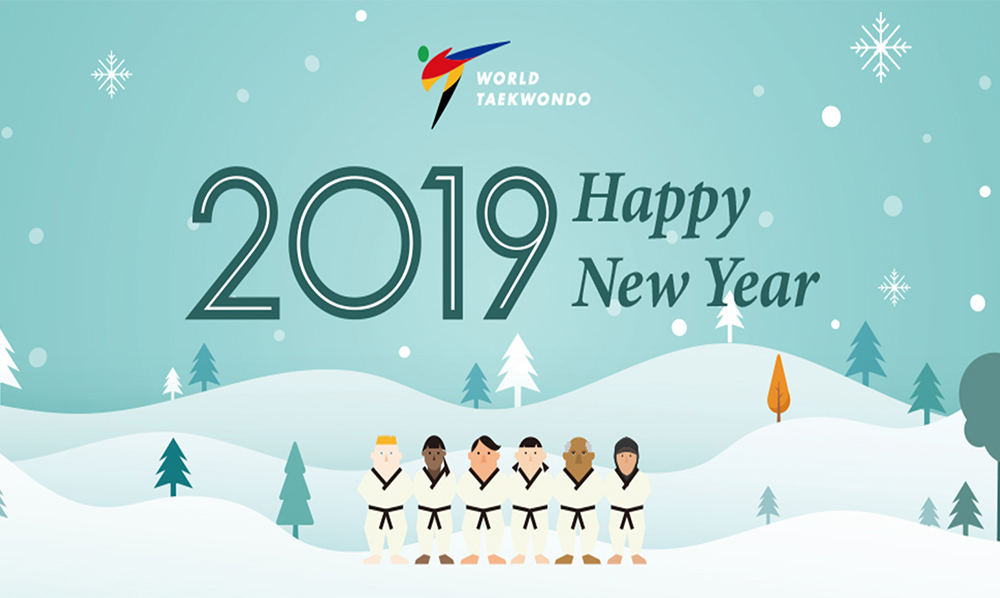 Happy New Year to you, our beloved World Taekwondo Family!

It was yet another tremendous year for World Taekwondo, as 2018 showcased the bright future of our sport. The successes of the Hammamet 2018 World Taekwondo Junior Championships and the Youth Olympic Games Buenos Aires 2018, coupled with taekwondo’s inclusion for the first time in the International School Sport Federation Gymnasiade 2018, exhibited the up-and-coming stars that will carry our sport into the future.

The past year also reinforced the worldwide appeal of the Grand Prix Series, now firmly established as one of the premier events in the World Taekwondo calendar. Other than our established stops in Manchester and Moscow, the 2018 Grand Prix Series also took place for the first time in Rome, Italy; Taoyuan, Chinese Taipei; and the Finals in Fujairah, United Arab Emirates.

The Grand Slam Champions Series entered its second year in Wuxi, China, and continued to push the boundaries of exciting spectator and media engagement in our sport. Wuxi will continue to play an important role in the global expansion of taekwondo over the coming years, as the 2021 World Taekwondo Championships will also be held in the city. Furthermore, the World Taekwondo Wuxi Centre was opened in July 2018 and will focus on global development and education programmes.

Poomsae also left an indelible mark on the global stage, with the 2nd World Taekwondo Beach Championships in Rhodes Island, Greece, and the Taipei 2018 World Taekwondo Poomsae Championships registering record-breaking participation numbers. Furthermore, poomsae was featured for the first time at the Asian Games, in Jakarta, Indonesia, with the host country winning its first-ever taekwondo medal – and gold – by a female athlete.

Taekwondo is a powerful channel for bringing hope and peace to the masses, and 2018 was another historic year in fulfilling our vision of peace through taekwondo.

On the occasion of the 2018 Olympic Winter Games in PyeongChang, Korea, World Taekwondo and the North Korea-led International Taekwondo Federation performed a joint demonstration at the pre-opening ceremony, in front of heads of states and dignitaries, and millions of viewers around the world. A high-calibre World Taekwondo delegation also visited Pyongyang, North Korea, and held another meeting in Wuxi.

In addition, World Taekwondo had the distinction as being the only Olympic international federation to be invited to the Vatican to perform a historic demonstration in front of His Holiness Pope Francis and thousands of people. The highly symbolic World Taekwondo demonstration concluded with the unfurling of a banner with our mantra: ‘Peace is more Precious than Triumph.’

As an Olympic international federation, we have a social responsibility to enrich people’s lives, including improving the livelihoods of refugees through projects of the Taekwondo Humanitarian Foundation (THF). The THF has opened the Azraq Taekwondo Academy for the benefit of hundreds of Syrian refugees, including women and children. I am excited to announce that the Azraq Taekwondo Academy has produced three first dan black belt holders, and we look forward to their continued growth into future champions.

Looking ahead to 2019, it is set to be another momentous year in World Taekwondo’s drive for excellence. An all-encompassing strategic plan focusing on sustainability and value-based results will be published to guide World Taekwondo’s programmes from next year. We will also focus on the global standardization and expansion of World Taekwondo’s development and education programmes.

The 8th World Para-Taekwondo Championships to be held in Antalya, Turkey, in February will be vital in promoting the global appeal of our sport, prior to Para-Taekwondo’s inclusion at the Tokyo 2020 Paralympic Games for the very first time.

The 24th edition of the World Taekwondo Championships in Manchester, United Kingdom, in May is also expected to be one of the best in our history, with the best athletes from around the world showcasing their talents before the Tokyo 2020 Olympic Games.

I also look forward to visiting not only Rome and Moscow for the Grand Prix and Grand Prix Finals, respectively, but also to our two new Grand Prix Series host cities, Chiba (Japan) and Sofia (Bulgaria). In particular, Chiba will be an important stop, as the 2020 Olympic Games and taekwondo test events will be held there.

Furthermore, the first-ever Islamic women’s open championships in Saudi Arabia will be organized in November, in support of World Taekwondo’s drive for gender equality. We will also be organizing more mixed gender team events across our five continental unions.

World Taekwondo is striving to be one of the leading organizations in the esports field, as we organize showcase events to demonstrate our esports potential to the world.

We are also teaming up with the IOC and related organizations to develop our own athlete safeguarding and prevention programmes. Protecting our athletes and stakeholders from harassment and abuse is our highest priority, and is a full commitment to the Hammamet Declaration on safe sport that our Council approved in 2018.

Finally, 2019 marks the 25th anniversary of taekwondo’s inclusion as a sport in the Olympic Programme. The momentous decision made by the IOC Session on September 4, 1994, was the catalyst that propelled World Taekwondo to the heights that we have reached today and we look forward to celebrating that achievement this year.

The successes that we have achieved to this point, and all that will be fulfilled this year is only possible through the World Taekwondo family working together. Let us strive to continue to work together to make World Taekwondo and our beloved sport something that we can all be proud of!