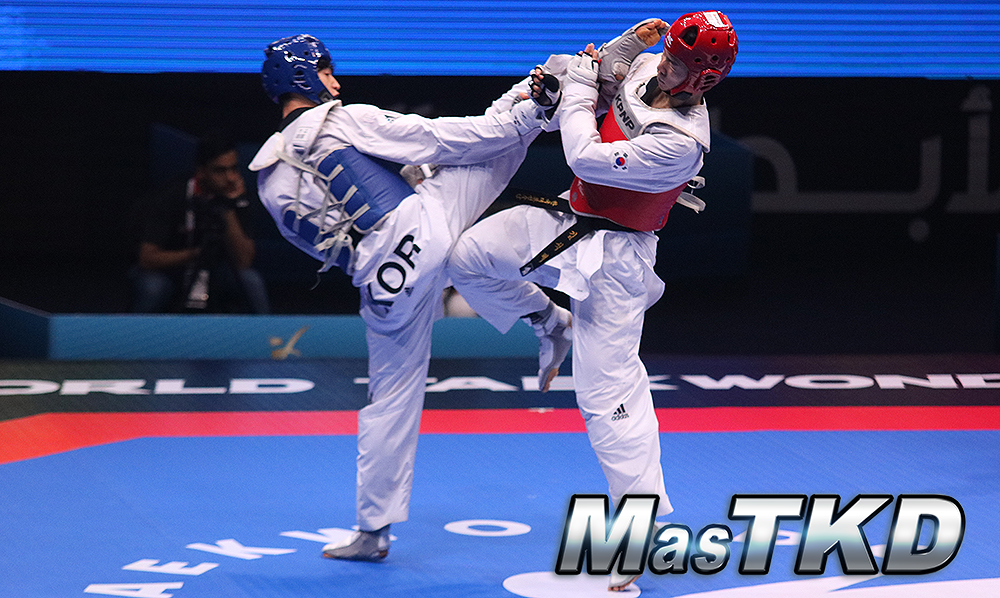 With 2018 being the penultimate fighting season before the 2020 Olympics, many Fujairah medalists look likely to grace the winners’ podium in Tokyo.

The final pitted So-hui-Kim of Korea against Panipak Wongpattanakit of Thailand: Two very well-matched fighters. Round 1 ended with Kim one point up. The second saw the tempo raise: The board rose to 5-5, with the taller Thai the aggressor, but Kim – a master defensive fighter – countering effectively. There was torrid combat in the third, with both fighters firing mid- and high-level kicks. In the last seconds, Kim retreated, but ended the match 10-8 for the gold. 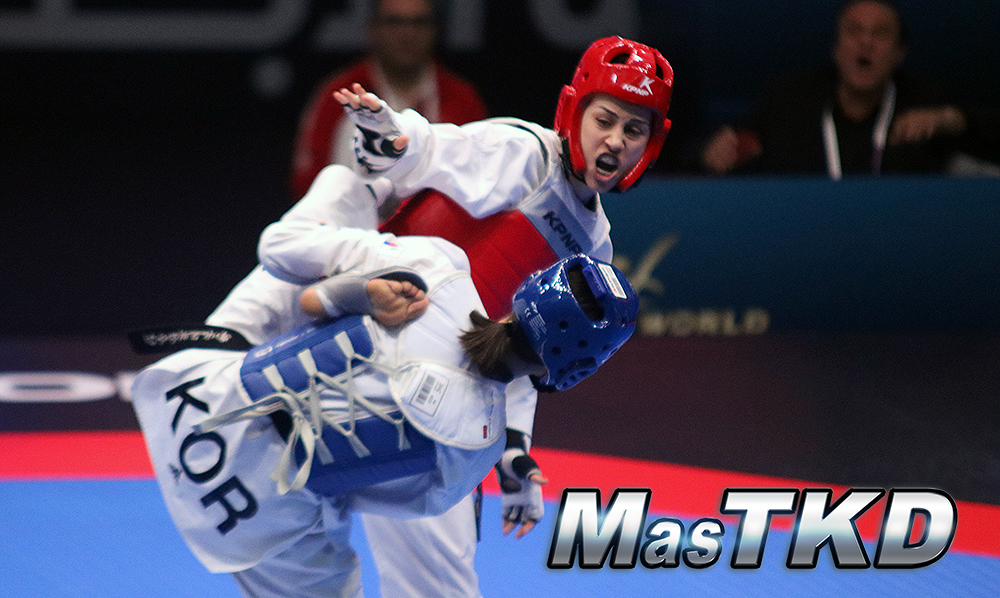 The bronze was won by Jae-young Sim of Korea

Total succeed at the first day of Grand Prix Final

Ah-reum Lee of Korea took on Nikita Glasnovic of Croatia with both players kicking with unusual venom and Round 1 ending 5-3 to the Croatian. In the second Lee draw ahead, keeping a cool head in the eye of the storm and ending the second 10-5 up. Round 3 ended with the board at 11-7, giving Korea it second gold of the evening – but it had been an excellent performance from the Croatian.

World Champion Nur Tatar Askari of Turkey took on Jan-di Kim of Korea and drew first blood, but Kim returned fire and Round 1 concluded 2-2; so did Round 2. This was a very well-matched bout. In the last 20 seconds of the third, it was 3-3; in the final seconds, it ended 5-5. In golden round, Tatar-Askari connected to the body, granting her gold.

Matea Jelic of Croatia had to be satisfied with bronze. 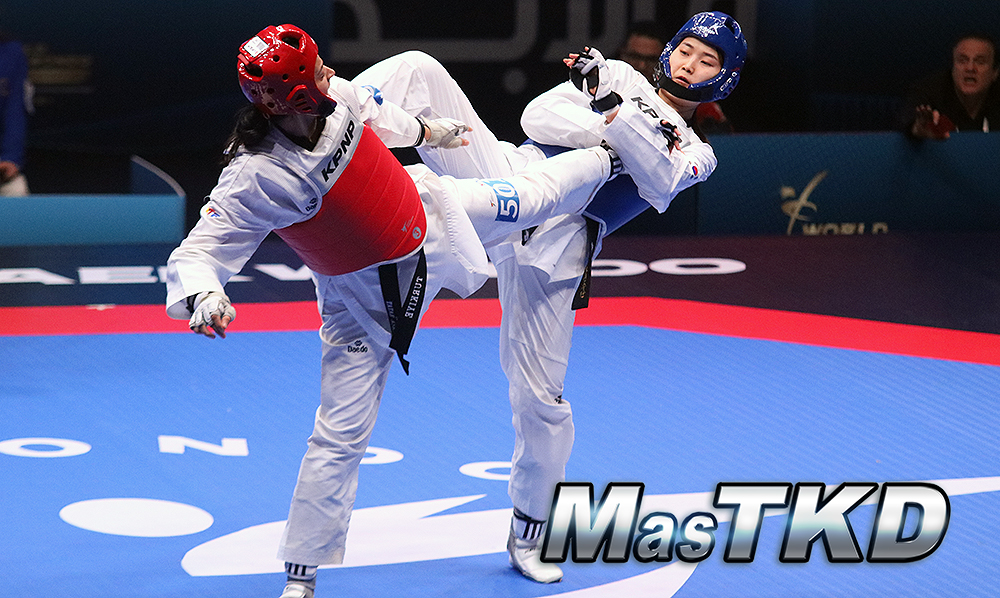 This pitted double-World Champion Bianca “Queen Bee” Walkden of Great Britain against Olympic Champion Shuyin “The Beautiful Giraffe” Zheng of China. These two have clashed many, many times before and the Bee attacked deep into the Giraffe’s defenses, employing a classic close-range strategy against the taller player. Round 1 ended 4-2 Walkden and Round 2 ended 6-4 Walkden, but in the third a high kick put Zheng ahead 7-6 – then Walkden was penalized for holding. Another super-fast head kick from Zheng put the board at 10-8. After a very rough last 20 seconds, Zeng won gold 17-8.

The bronze medal went to Nafia “The Amazon” Kus of Turkey.

Korean rookie Jun Jang took on Spain’s Jesus Tortosa Cabrera. The shorter Jang opened the scoring, with an effortless back kick to the body; the Spaniard returned fire with a head kick and Round 1 ended 10-3 to Jang. The second round was scrappier, with pushing, shoving and kicking; it ended 14-8 to the Korean. The third saw fine technique from both players but it ended with a gold for Jang and a final score of 21-12. 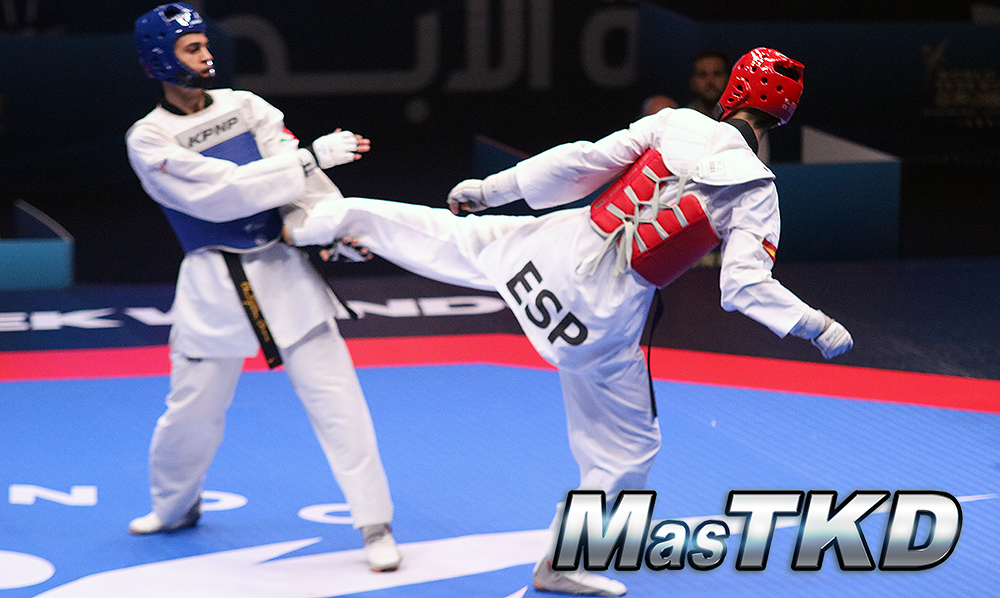 Bronze was won by Italy’s Vito Dell’Aquila on a by.

The final in this highly competitive category was a Korean civil war: Superstar Dae-hoon Lee versus Seok-bae Kim. Round 1 saw Lee go to work and deliver a stern lesson to him, leading the board with a massive point gap. In the second, Lee – ambidextrous, inexhaustible, flexible – was 31-8 up. In the third, Lee’s high round kick and jump spinning back kick drew gasps from the crowd: The man is the closest thing taekwondo has to a kicking machine. A desperate Kim even tried an arcing, dive kick, but though he racked up an impressive 20 points, Lee’s 65 score won a superb gold. 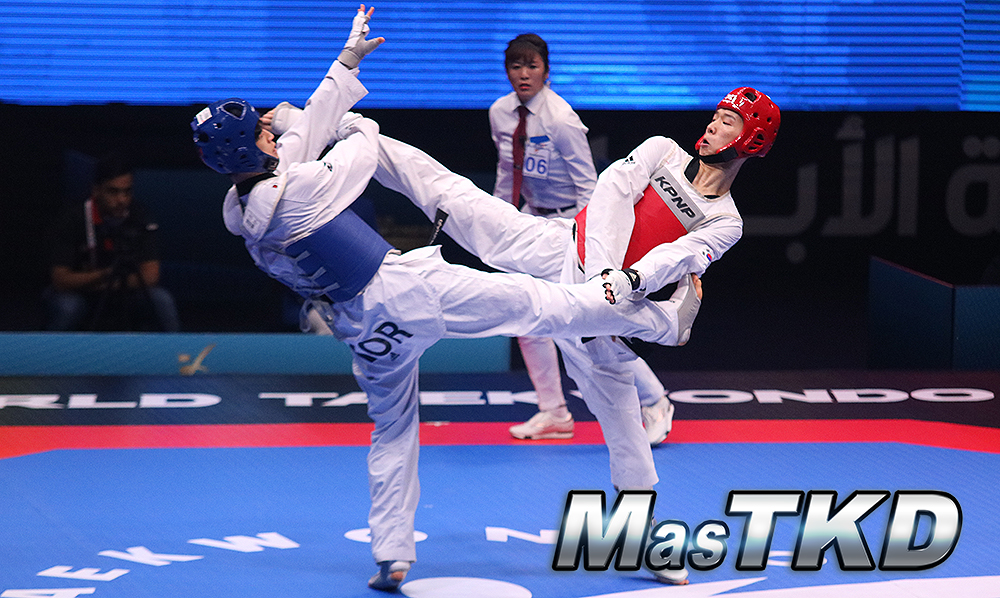 Russia’s Maksim “Red Machine” Khramtcov took on Norway’s Richard Andre Ordemann in a fire fight that was probably the best fight of the night. Round 1 ending 4-4 after exhaustive work from both athletes. In the second, Khramtcov played his, flexible, creative multi-kick leg game against the more conservative Norwegian – but the latter was more accurate, and Round 2 ended 10-9 to Ordemann. In the third, a textbook round kick from Ordemann stunned the Russian, but Khramtcov returned fire with spinning and ax kicks. It ended with a tremendous 27-14 surprise win by Ordemann against Khramtcov – one of the most dominant players in the game.

Bronze was won by Olympic champion Cheick Sallah Cisse of Cote d’Ivoire in golden round. 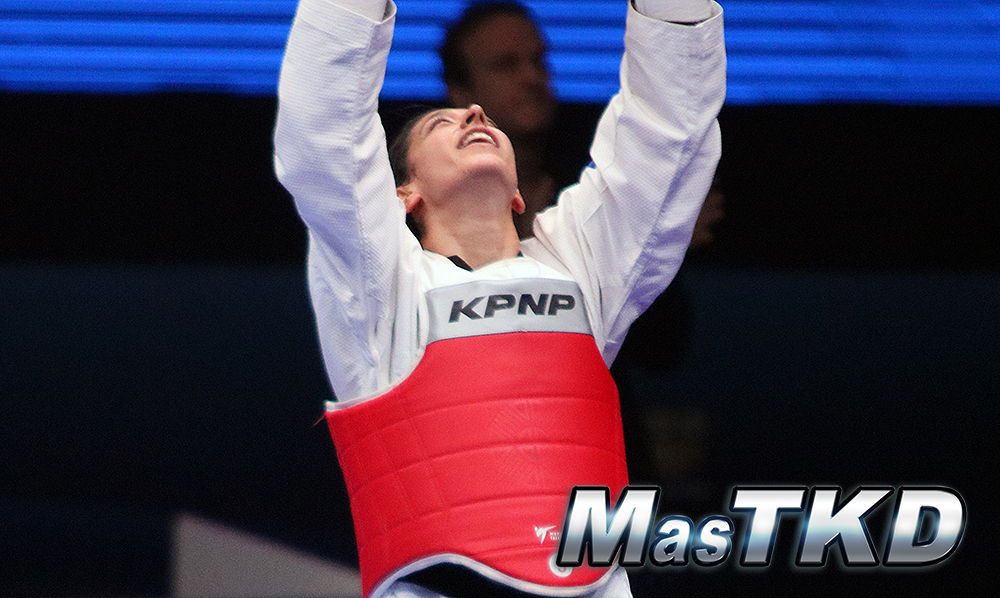 Vladislav Larin of Russia took on Kyo-don “The Bear” In of Korea. Round 1 started with psychological war and exchanges of side kicks, but neither man was landing. It ended 0-0. The second continued the same way, before Larin drew ahead 3-1 with body kick and a punch. In the third, in woke up and the tempo of this cagey match lifted. In the final seconds, both were battling on the edge of the area, unleashing spin back kicks and ax kicks. It ended 5-1 to Larin – who exalted with a roar at his gold.

Iran’s Sajjad Mardani took bronze, via superiority in golden round.