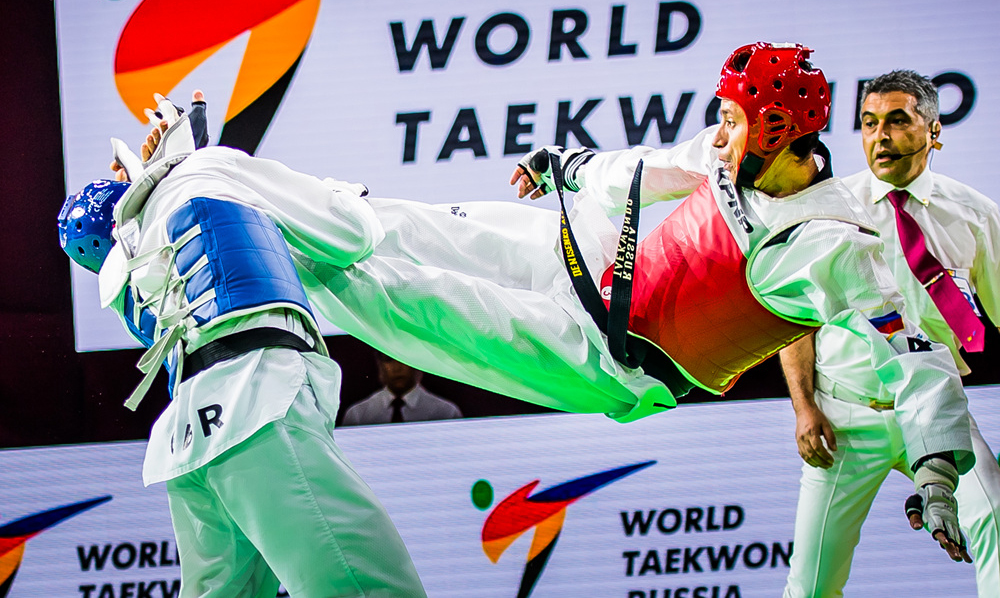 The first semifinal pitted Bradly Sinden of Great Britain against Pontes Edival of Brazil. Edival scored first, while the Brit was penalized for holding – and lost his video replay quota early. In the second round Edival extended his lead while nimbly evading Sinden’s arcing head kicks. Round 2 ended 10-5 to the Brazilian. In the third Sinden looked energized and bought his points up with a spinning heel kick to the head. By mid-round the Brazilian’s lead had been shaved to one point: 14-15. Edival was now looking tired and Sinden briefly drew ahead, but the third ended 19-19. In golden point, Sinden scored to the body, putting him through to the final. 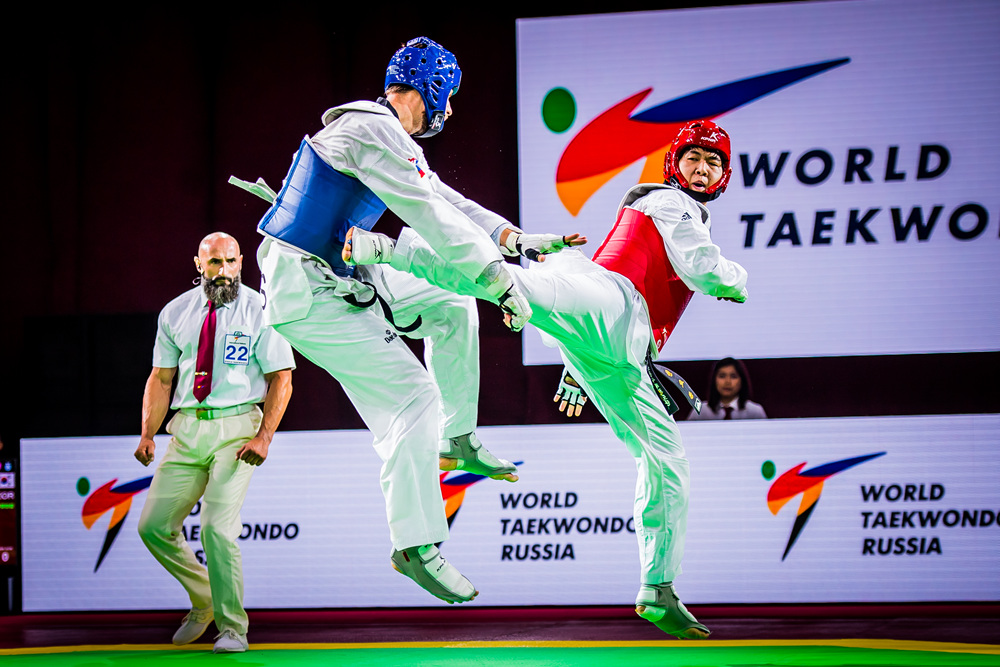 In the second semi, Abolfazl Yaghoubijouybari of Iran took on the taller Alexey Denisenko of Russia. Yaghoubijouybari connected first but much of the round was mid-ring psychological warfare. Round 1 ended 4-4. The second was fiercer with the Iranian’s unique war cry reverberating around the arena. It ended 10-5, to Yaghoubijouybari’s advantage. In the third, the Iranian was using some nifty footwork but Denisenko put himself back into the game with a head kick, then a fall from Yaghoubijouybari. The rounded ended 12-12. In overtime, Denisenko won on superiority.

The final was Sinden versus Denisenko. The Russian scored first with a well-timed round kick to the head fired from the edge of the mats; the Brit responded with a body kick. Sinden was doing most of the work, but Denisekno was firing more accurate shots, and the first ended 5-2 to the local fighter. In the second, Sinden bought his score up before Denisenko landed another sneaky head kick – then another – varying his attack with ambidextrous kicks and punches. The second ended with Denisenko up 13-4. Sinden had his work cut out in the third and connected with a back kick. Then the Russian was penalized for holding. The score went to 9-13, but Denisenko landed yet another round kick to the head, then unleashed a rapid-fire series of kicks on the edge of the mats. After a furious final 30 seconds, it ended 22-12, and gold for Denisenko.

In the first semi, Rio gold medalist Hye-ri Oh of Korea went in against Croatia’s Matea Jelic. A slow first round ended scoreless. In the second, Jelic opened the scoreboard with a thwacking punch, then stunned Oh with a perfectly timed face kick. The round ended 4-0 to Jelic. In the third, Oh came out at the charge, but was caught with another stealthy face kick. It ended 9-3 to the Croat.

The second semi pitted Lauren Williams of Great Britain against Julyana Al-Sadeq of Jordan. Action exploded from the get-go. The Jordanian newcomer was unintimidated by the ferocious Williams, and outgunned the hard-charging Brit for a 4-1 lead in Round 1. The second was a furious mix of multiple techniques, and Al-Sadeq ended the round 9-5 up. But Williams meant business in the third, with combination attacks taking her score skyward. It was briefly 10-10 after a William head kick – and the Brit ended it by forcing Al-Sadeq off the mats to win 11-10. It had been a hugely entertaining match – and a tremendous performance by the inexperienced Jordanian.

The final pitted machine gun – Williams – against sniper – Jelic. It was action from the opening bell, with Jelic scoring first to the body and William equalizing almost immediately. A stumble by Jelic put Williams ahead, 3-2, then the Brit lifted her score further, taking the first round, 5-2. The Croat scored almost immediately, but Williams connected to the head, going up 8-4. In back-and-forth action, the Croat drew ahead, forcing Williams off the mats. The second ended 13-11 to Jelic. A risky high spinning kick saw William fall, then the Croat scored again, taking her points to 17, then 18. Williams counter-attacked, forcing Jelic out, then landed, going up to 15 and – highly unusually – floored Jelic with a punch. In the last seconds, William was blitzing forward with punches and spinning kicks, but it ended 20-17 with a deserved victory and gold for Jelic. 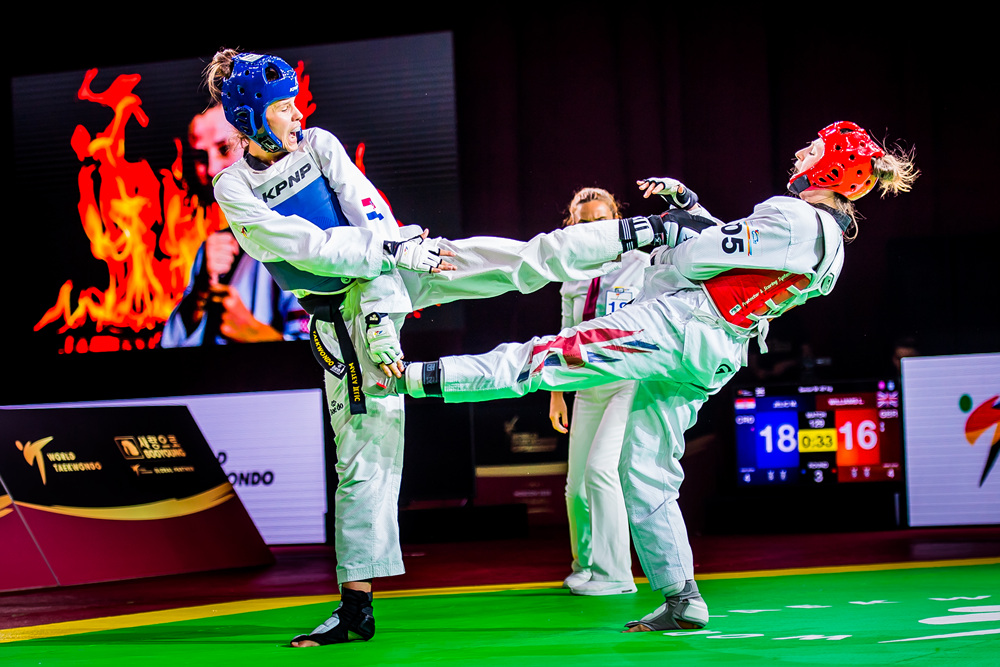 In the first semi of the heavyweights, Anthony Obame of Gabon did battle with Ivan Trajkovic of Slovenia. The two were evenly matched, but the Slovenian won the round 4-2. In the second, Obame looked dangerous with a varied arsenal of techniques, but the Slovenian was more accurate; the round ended 11-4. In the third Obame connected with a head kick, dropping his opponent, but the Slovene recovered, his accurate body kicks raising his score. Then, Obame’s spinning back kick bought the score to 17-18, and a fall bought the board to 18-18. A furious flurry in the final seconds ended it 22-21 to Trajkovic.

The second semi pitted Oleg Kuznetcov of Russia against Kyo-don In of Korea. The first round was slow paced, with In winning it 1-0. In the second, In appeared to injure his foot in a clash but ended the round up, 2-0. In the third, in a fast back-and-forth blitz of techniques, the Russian briefly raised the board to 2-2 but In swiftly raised his points to 10, making excellent use of his spinning back kick. It ended 10-5 with victory for In.

The final was Korea’s In versus Slovenia’s Trajkovic. In landed first with a side kick, but the rest of the round was slow paced with the two fighters appearing well matched and very cagey. The first round ended 2-0 to In. In the second, there was more movement from both players, but little connecting. In extended his lead with another body kick, 4-0, and the round ended on that score. In the third, the Slovene put more pressure on, but In was looking almost relaxed. The Korean landed a spinning head kick but hit the deck, taking the score to 9-1. In, however, had the range, and lifted his score to 13-1.The Slovene finally landed a body kick, and was rewarded by stumbles from In which cost him penalties, but the battle ended with a decisive 13-5 victory to the Korean.

Earlier in the day, World Taekwondo held a press conference in Moscow’s Tass News Agency. During the press conference, the participants, notably WT President Chungwon Choue and WT Secretary General praised the rising level of Russian taekwondo, noting that the strength of the Russian game meant that Team Korea was no longer the dominant force it used to be.