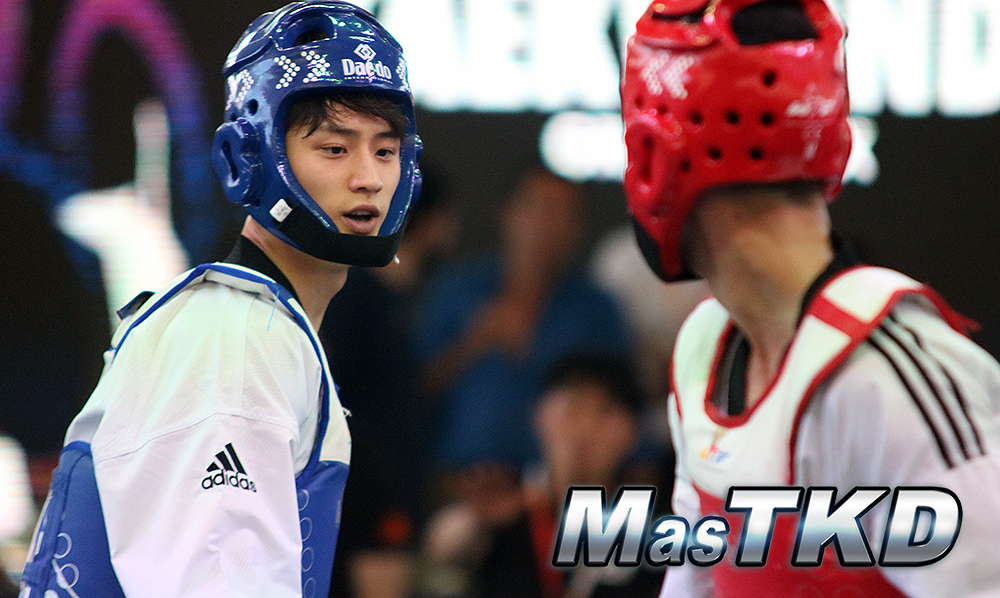 The action unfolded in the grand and traditional Foro Italico in front of many animated onlookers. Over the course of the three days, 256 male and female athletes representing 51 different countries will compete across eight weight categories.

Dae-Hoon Lee of Korea won gold in the men’s -68kg, Mengyu Zhang of China won the women’s -67kg and Vladislav Larin of Russia claimed gold in the men’s +80kg weight category. All three fighters will have significantly boosted their Olympic ranking ahead of Tokyo 2020.

The men’s -68kg gold medal match saw Dae-Hoon Lee of Korea, who has won a record total of 9 Grand Prix titles, and Alexey Denisenko of Russia compete in yet another Grand Prix Final, having battled it out for gold twice in 2017. It was Lee who came out on top on both those occasions, but both fighters were in with a chance of gold this time around. The first points of the fight weren’t registered until a minute and half into the first round when Lee landed a front kick to the trunk. Both fighters continued to defend valiantly, but Lee stretched his lead to 4-0 as he landed another kick to the trunk. 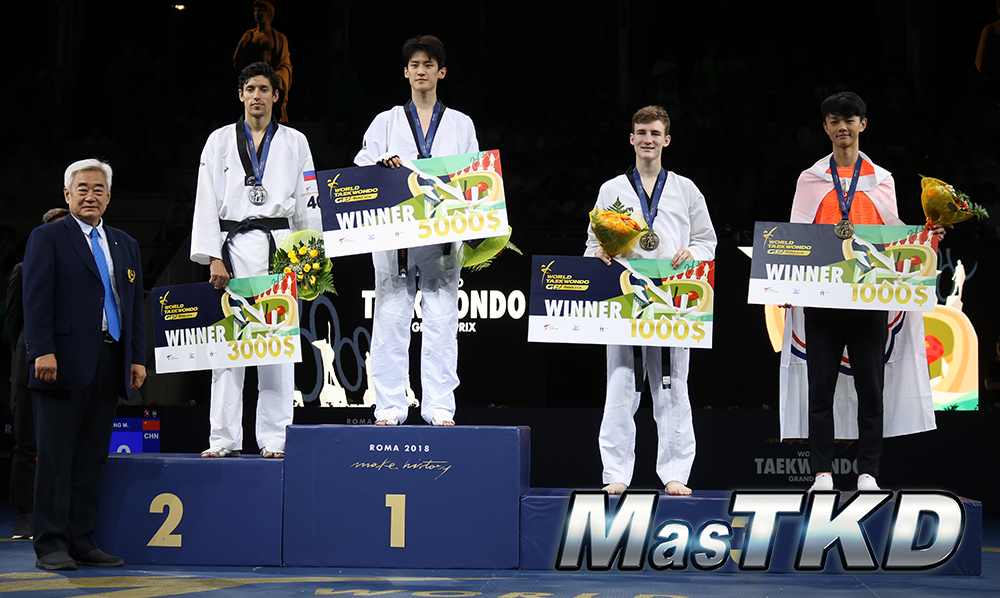 However, Denisenko wouldn’t give up his dream and managed to land consecutive kicks to the trunk to bring the scores level and set up an engrossing third round. Denisenko came out in the third round with a point to prove and he immediately forced his opponent into conceding a gam-jeom to put himself into the lead for the first time in the match. However, Lee responded with a kick to the trunk only for Denisenko to immediately draw the scores level once again with a punch to the trunk. It seemed that the pair knew each other’s tactics all too well as it looked like the fight would go to a golden point round. However, in the last 10 seconds the match exploded into life as both fighters landed points and gave their all for the gold. But it was Lee who added to his impressive Grand Prix record by winning the fight 10-8.

The bronze medals were shared by Yu-Jen Huang of Chinese Taipei and Bradly Sinden of Great Britain.

The women’s -67kg final saw Mengyu Zhang of China and Magda Wiet Henin of France compete for gold. The second final of the day also started relatively quietly as neither fighter looked to concede any points early on. In the last 30 seconds of the round, Wiet Henin skilfully landed consecutive kicks to the trunk to end the round 4-0 up. In the second round, Zhang composed herself and was determined not to let the fight slip away. She brought the scores level to 4-4 with two kicks to the trunk and set up yet another nail-biting third round. Wiet Henin started where she left off in the third as she landed a kick to the trunk, only for Zhang to respond immediately with an expert kick to the head. Zhang then looked to have secured the gold medal with another two kicks to the trunk; she was 11-6 up with 30 seconds to spare. However, Wiet Henin set up a tense last few seconds with an incredible kick to the head. But it wasn’t enough as Zhang hung on the clinch the gold in another fascinating final. The final score was 11-9 in Zhang’s favour. 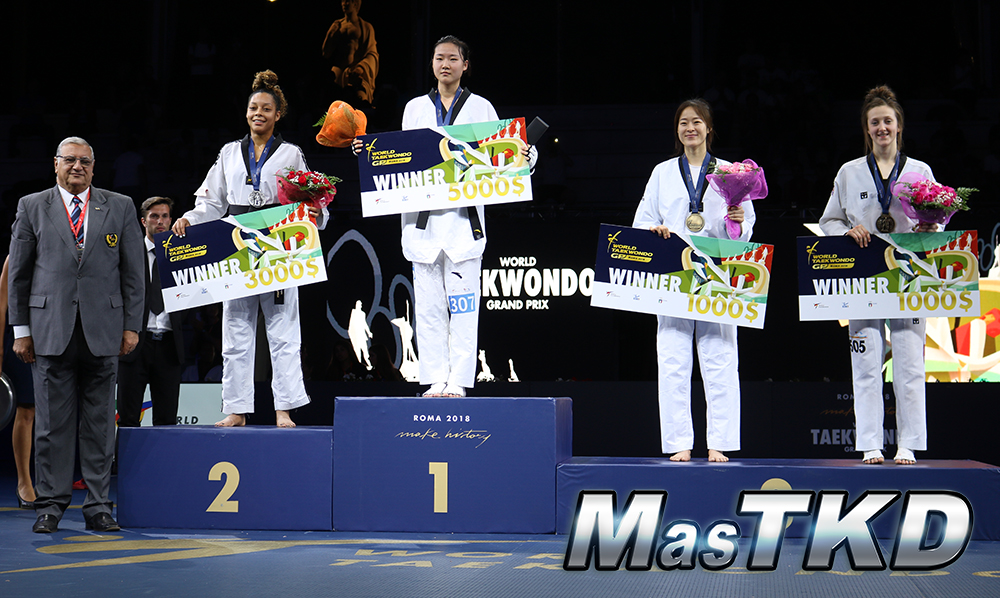 Vladislav Larin of Russia, Abidjan 2017 Grand Prix winner and pre-tournament favourite, and Kyo-Don In of Korea, London 2017 Grand Prix winner, battled for gold in the men’s +80kg final. In conceded two early gam-jeom’s to give Larin a two point advantage, but then managed to compose himself almost immediately as he landed two punches to the trunk and levelled the score. Both fighters then looked to assert their authority on the fight, but it was Larin who landed the final blow of the round. A well-timed kick to the trunk meant that the round ended 6-4 in Larin’s favour. 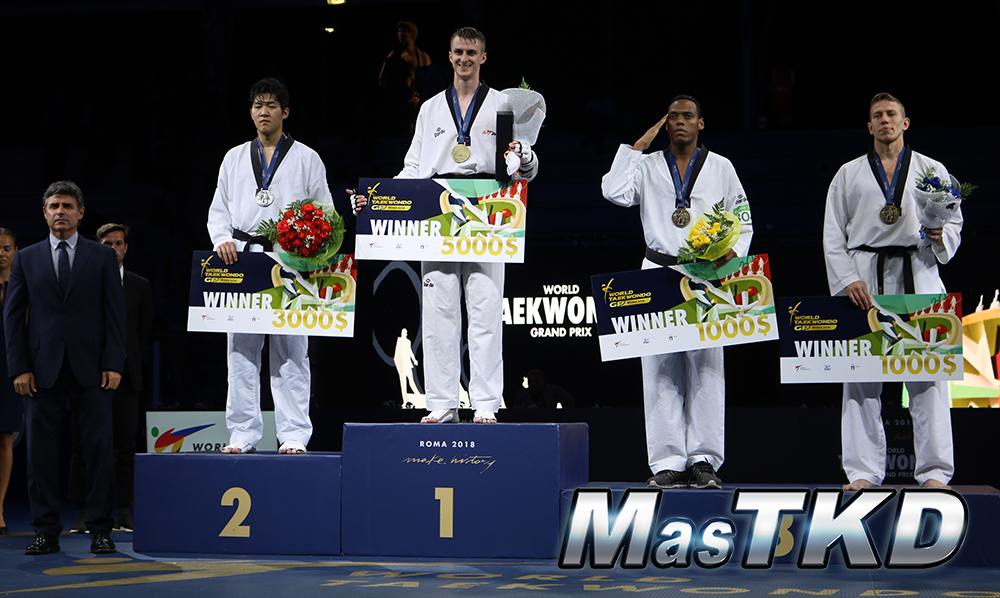 Only one point was scored in the second round when Larin conceded a gam-jeom and set up yet another tense final round. The third round exploded into action immediately with both fighters giving everything for gold. In initially tied the scores only for Larin to quickly regain his lead with a kick to the trunk. Both fighters then landed a combination of kicks and punches to the trunk in what was a frantic ten seconds. Larin was then forced out of the ring, but the score was still 8-10 in his favour going into the final 20 seconds of the fight. The killer blow was then landed by Larin with yet another kick to the trunk as he claimed the gold medal for Russia by winning the match 13-8.

Maicon Siqueira of Brazil and Dmitriy Shokin of Uzbekistan claimed the bronze medals on offer.