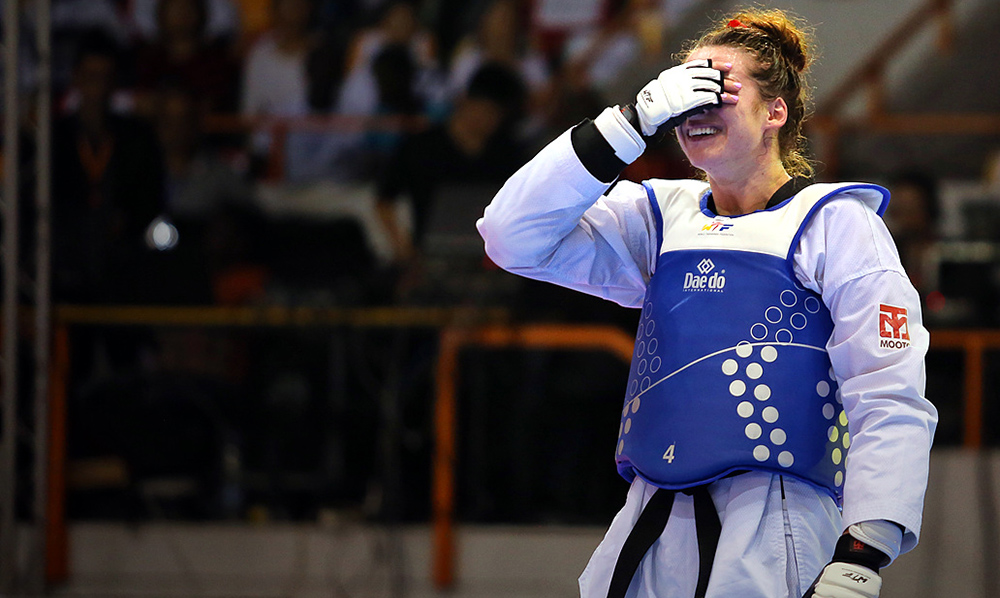 In addition to Walkden and Cisse, players from Thailand and Korea won gold medals on Day 1 of the two-day event in Abidjan – the first time the prestigious, Olympic-ranking event has taken place on the African continent.

The sweltering heat in Abidjan’s Palais de Sports de Treichville was matched by a sizzling ambience as the local crowd – including drummers, trumpeters and dance troupes – unleashed the kind of noise usually heard at Premier League football matches. But in defiance of the temperature – athletes coming off the mats were so drenched in sweat that they looked as if they had been swimming, rather than fighting – the players delivered some hyper action.

Prior to the semis-finals, WT President Chungwon Choue addressed the audience, noting that 2017 marked the first time a Grand Prix event had been held in Africa – in Rabat, Morocco – and also the first time that the Grand Prix Final had been held in Africa – in Abidjan. “The African continent is now a really important part of the world taekwondo family,” Choue said. “I believe this Grand Prix Final will enhance the development not only of Cote d’Ivorian taekwondo, but the whole African continent.”

President of the Cote d’Ivorian Taekwondo Federation Cheick Daniel Bamba reinforced the message. “Taekwondo is shining!” he said. Cote d’Ivoire’s Minister of Sport, Francois Amicha, received a plaque of appreciation from Choue, as did Governor of the Autonomous District of Abidjan, Robert Beugre Mambe. 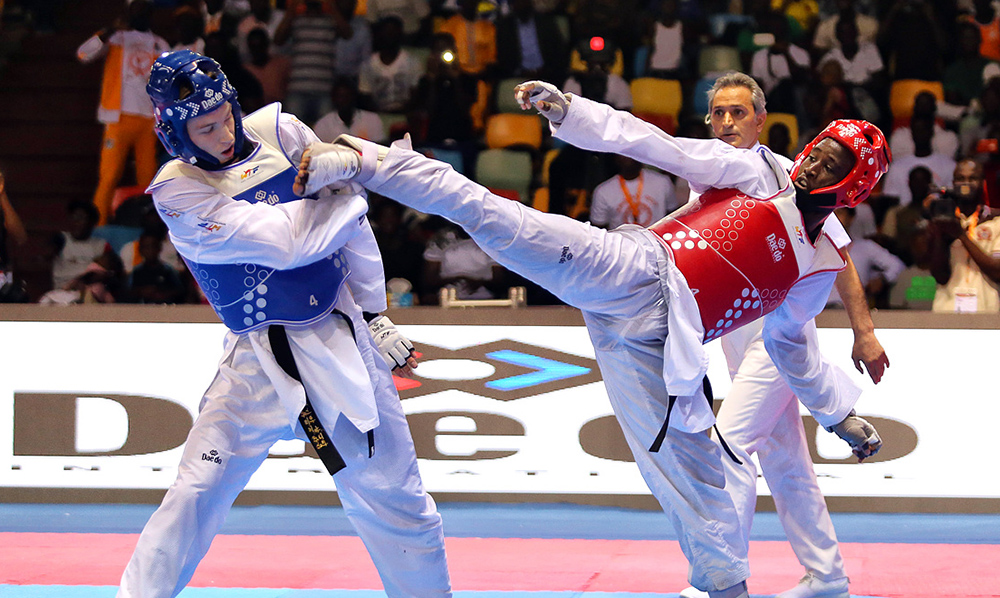 In the final of the category, the high-kicking Panipak Wongpattanakit of Thailand took on defensive master-player and 2016 Olympic gold medalist So-hui Kim of Korea. In Round 1, contrary to her usual counter-attacking game, Kim charged out, putting the taller Thai on the back foot, but it was Wongpattankit’s target radar that was locked on and she landed accurately, leveraging her height advantage and ending the first round 14-7 up. The second round saw long-range side kick dueling, then tense clinch work at the edge of the mats, ending 18-10 to Wongpattanakit. In the third Kim, chased the Thai across the mats, but could not match her kick placement and the Thai extended her lead: in the last minute, the board stood at 22-11. In the last 30 seconds, Kim fought forward in a surge of attacks, but fell mid-spin as she tried to land a high-scoring spin kick to the head. It ended 25-11, with gold for the Thai and silver for the Korean.

In the final of the category, Maksim Khramtcov of Russia went into battle against local hero and Olympic gold medalist Cheick Sallah “Fearless” Cisse of Cote d’Ivoire – who danced onto the mats to rapturous applause and delighted chanting. What followed will be remembered in taekwondo’s collective memory as one of the sport’s all-time epics.

Cisse, who had been fighting like a devil all day, attacked forward from the opening buzzer, but the Russian remained calm and took a three point lead – then shook the local hero with a molar-rattling head kick. Round 1 ended 8-3 to Khramtcov. Cisse drew first blood in the second round, before action stopped as both coaches furiously appealed points scored in a torrid clash. He board was reset: 9-6 to the Russian. What followed was some fine play, with Khramtcov visiting the mats and the board going to 9-9, then 10-9 to Cisse and the crowd exploding – before the Russian equalized. This was “game on” with a vengeance. Cisse landed a round kick to the head, then retreated from a leaping ax kick from the Russia. The drama the rose another notch with yet more coach appeals: This was a battle royale: The round ended 16-12 to Cisse, with the crowd roaring manically, stamping feet and sounding horns.

Round 3 was war from the opening buzzer: A battle of cool Russian finesse versus scorching Cote d’Ivorian all-out attack. The score went to 21-21, but the Russian – finally – seemed to be tiring. Meanwhile Cisse, buoyed by the crowd, seemed to be hyper energized, taking the fight forward and going 27-21 up. He sent the Russian flying with a side kick, then buffeted him with a back kick. The two coaches were as animated as the fighters as the seconds counted down and the scoreboard rung up hits from both warriors like a pinball machine. Khramtcov connected with a head kick, taking the score 29- 29 – but it was disallowed for holding. The battle royale ended 33-28 with a gold for Cisse, a superb silver for Khramtcov – and with the referee probably deserving a bonus. “The most exciting game!” enthused WT President Choue, shaking his head. “Amazing! Beautiful!” was all an emotional Bamba could say. 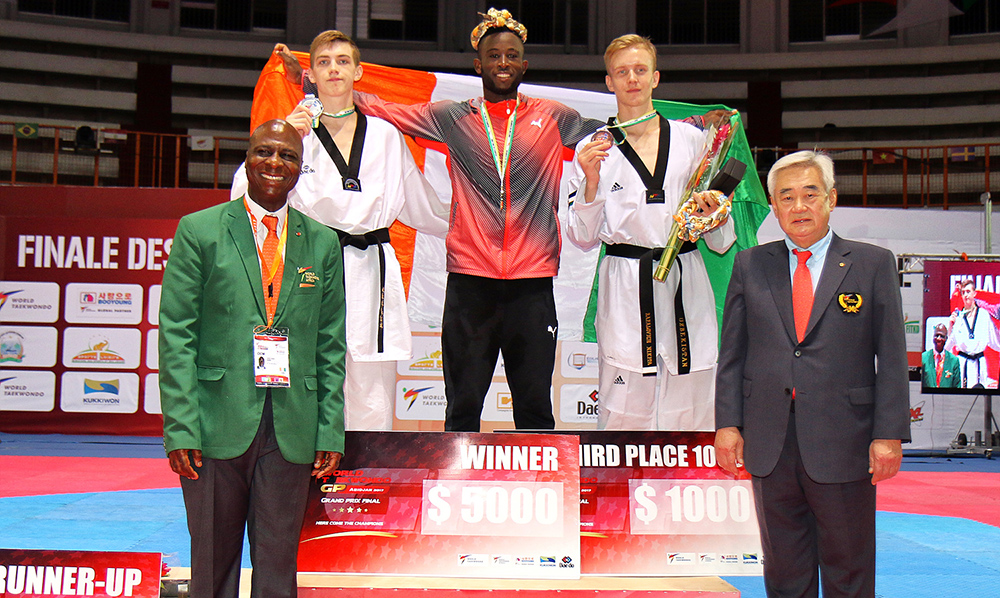 In an unscripted moment, the tournament was briefly halted as Cisse, wielding a national flag, ran a lap of honor. Then – in an unprecedented move – he charged up onto the VIP stand to pay respects to his master, to Choue, and to Bamba.

In the bronze medal match, Yassine Trabelsi of Tunisia and Nikita Rafalovich of Uzbekistan battled to a 13-13 draw. In golden point, the Tunisian launched an athletic, high-kicking offensive, but it was Rafalovich who connected with a body kick to take the match.

In the final, double world champion Bianca “Queen Bee” Walkden of GB took on Da-bin Lee of Korea. The Korean, giving away a height advantage to the British girl, scored first blood, but Walkden – who has won all three Grand Prix so far this year – soon showed her quality, racking up hits and ending the first 9-3. A grab by Walkden in the second cost her a penalty point, but she maintained her lead against the game Lee, who bought the score up to 7-9 against the Brit. In the third, a short, sharp spin back kick put Walkden up 11-7 as Lee attacked forward, but then the Korean fell. As combat continued, Walkden used her feet to keep her out of danger, playing a cool game against the attacking Korean. In a display of technical skill, tactical nous and mastery of both the long and the close range, the Queen Bee won 16-9 to take the gold, leaving Lee a well-merited silver.

With her victory, Walkden had written a page in taekwondo history: Never before has a fighter won all four of a single year’s Grand Prix titles.

The final saw World Champion Tae-hun Kim, who has also won two of the year’s three Grand Prix prior to Abidjan, face off against Farzan “The Tsunami” Ashourzadeh Fallah. The Iranian is a nervy fighter with a wide arsenal of techniques, while Kim is perhaps the finest round kicker in the game – a weapon he wields ambidextrously. So this would be a clash of styles: The tricky Iranian against the deadly professional Kim. The first round ended with Lee 5-2 up. The second saw Lee unleash a jumping side kick – highly unusual in competition – before settling down and scoring again and again in a flurry, going 9-2 up. The Korean continued to stalk the Iranian, ending the round 12-2. In the final round, Ashourzadeh Fallah fought forward, but was hitting air as the Korean maintained critical distance, while keeping Farzan at bay with his counter kick. As the seconds counted down, an apparently disheartened Ashourzadeh Fallah seemed unwilling to press any more attacks – or even fully extend his kicks. It ended 14-2 with gold for Kim and silver for The Tsunami.

In the bronze medal match, Mikhail Artamonov of Russia had no answer to the explosive attacks of Spain’s Jesus Tortosa Cabrera and the Spaniard won a decisive 30-4 victory.

Athletes at the event were fighting not only for Olympic ranking points, but also for prize money – USD6,000 for gold medalists, USD3,000 for silver medalists and USD1,000 for bronze medalists – and for a place in the upcoming, new Grand Slam Championship Series. The new series takes place in Wuxi, China, over December 2017 and January 2018, offering the biggest prize money in taekwondo history.