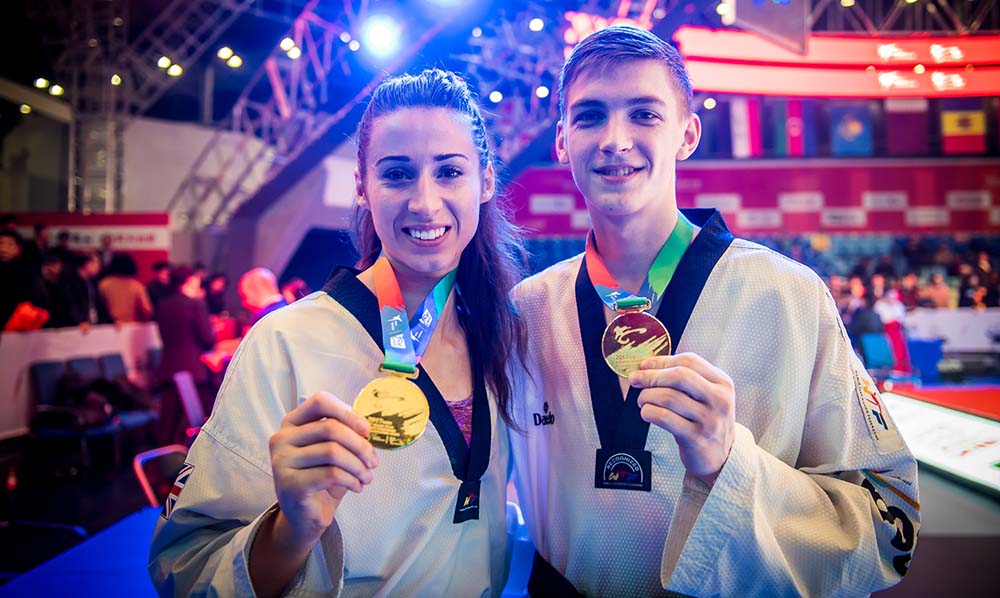 Silvers (and USD20,000 each) were won by Team USA’s Jackie Galloway and Team Korea’s Hwan Namgoong, while bronzes (and USD5,000 each) went to Turkey’s Nafia “The Amazon” Kusand Azerbaijan’s Milad Beigi in, respectively, the women’s +67kg and the men’s -80kg categories.

There were some shock exits in the preliminaries: Rio 2016 Olympic champions Shuyin “The Beautiful Giraffe” Zheng of China and Cheick “The Man with No Fear” Cisse of Cote d’Ivoire both lost their first bouts. However, Walkden capped her extraordinary 2017 season – four consecutive Grand Prix victories, in addition to the successful defense of her World Championship title – with a scorching win over Galloway. And a new star was born: Team Korea’s virtual unknown Hwan Namgoong, the smallest fighter in his division, stormed through the competition, only losing in a spectacular final against Khramtcov. 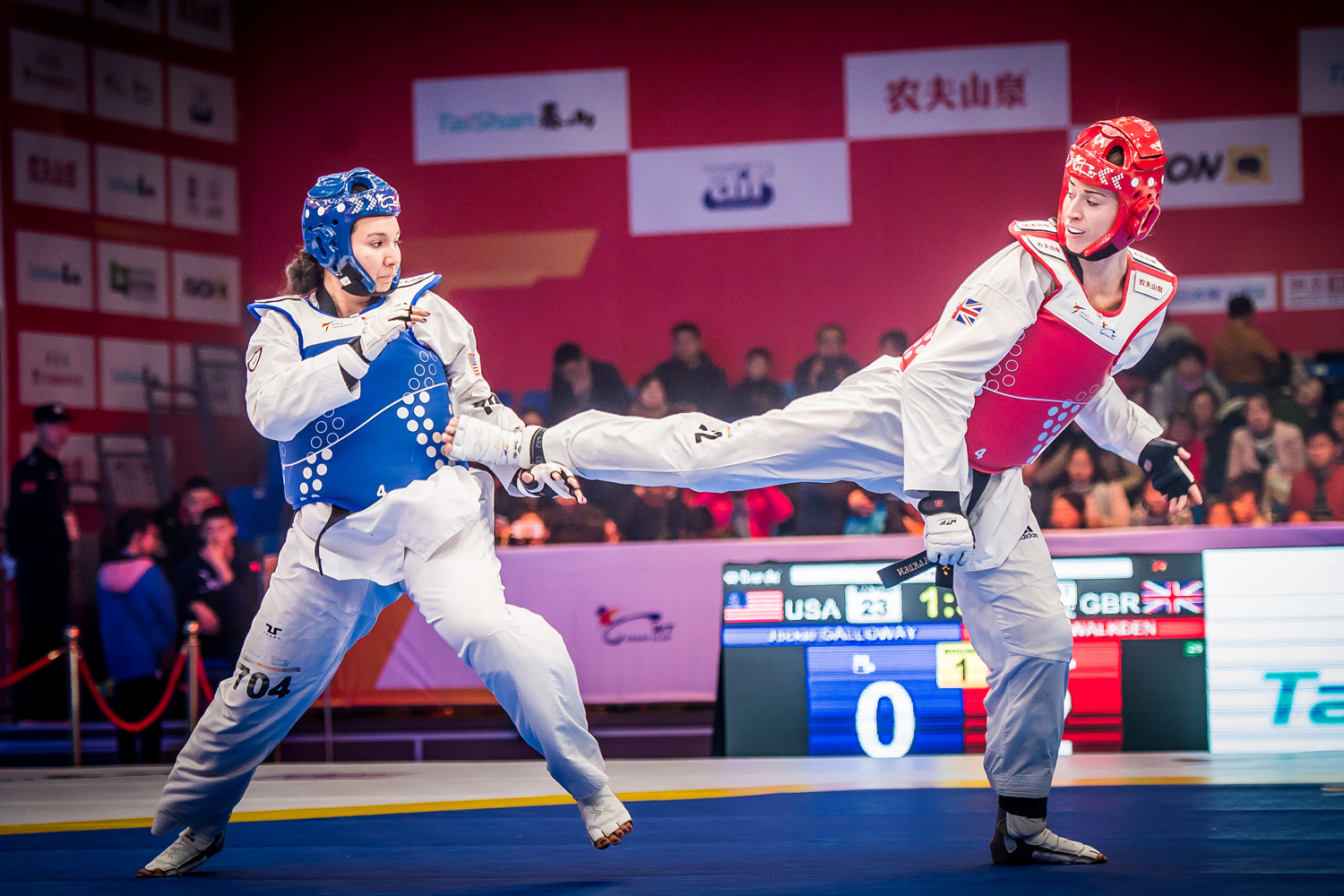 The Grand Slam – an event designed as a TV showcase for taekwondo – was covered by 39 online platforms. Fought on a custom-designed “stage for superstars,” it featured Las Vegas-style presentation: thunderous audio, dancers jiving between matches, and ring girls announcing the rounds. And the male division featured a historic first for taekwondo: The final and bronze medal matches were both fought over five two-minute rounds, rather than the usual three rounds. 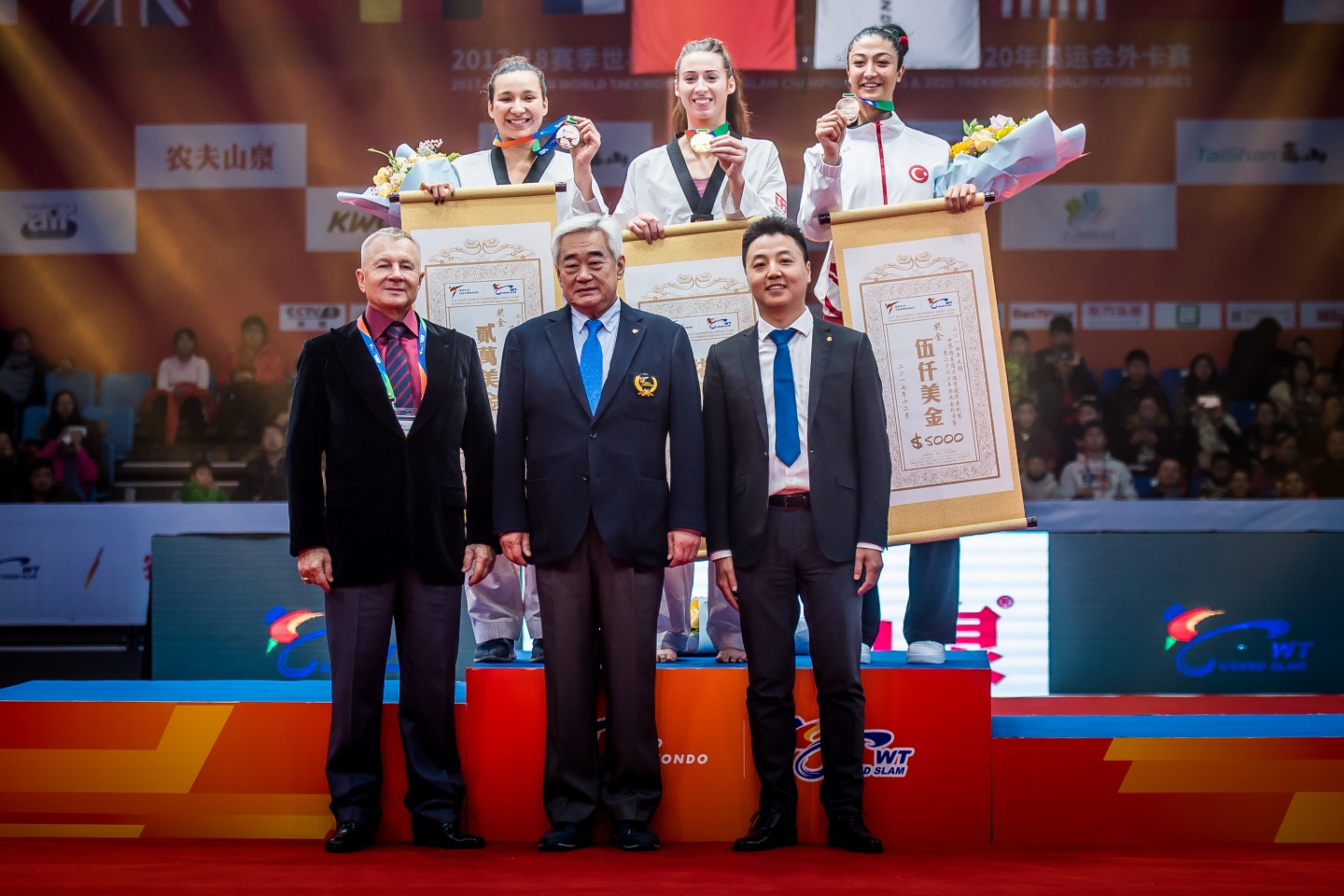 The final of the women’s category pitted Galloway against Walkden. Galloway displayed some sweet footwork, but from the opening buzzer, Walkden was on fire: She scored two, then four then eight points with her sniper-like side kick. A penalty cost the American another point early in the second as Walkden dominated the center of the ring, forcing Galloway to try and cut into her perimeter. The round ended 9-1 to the Brit. As the action continued, Galloway tried high kicks, just could not get past Walkden’s stabbing side kick. Walkdens’ distancing and timing were impeccable: Galloway never really looked to be a threat and the Brit won decisively, 10-2. 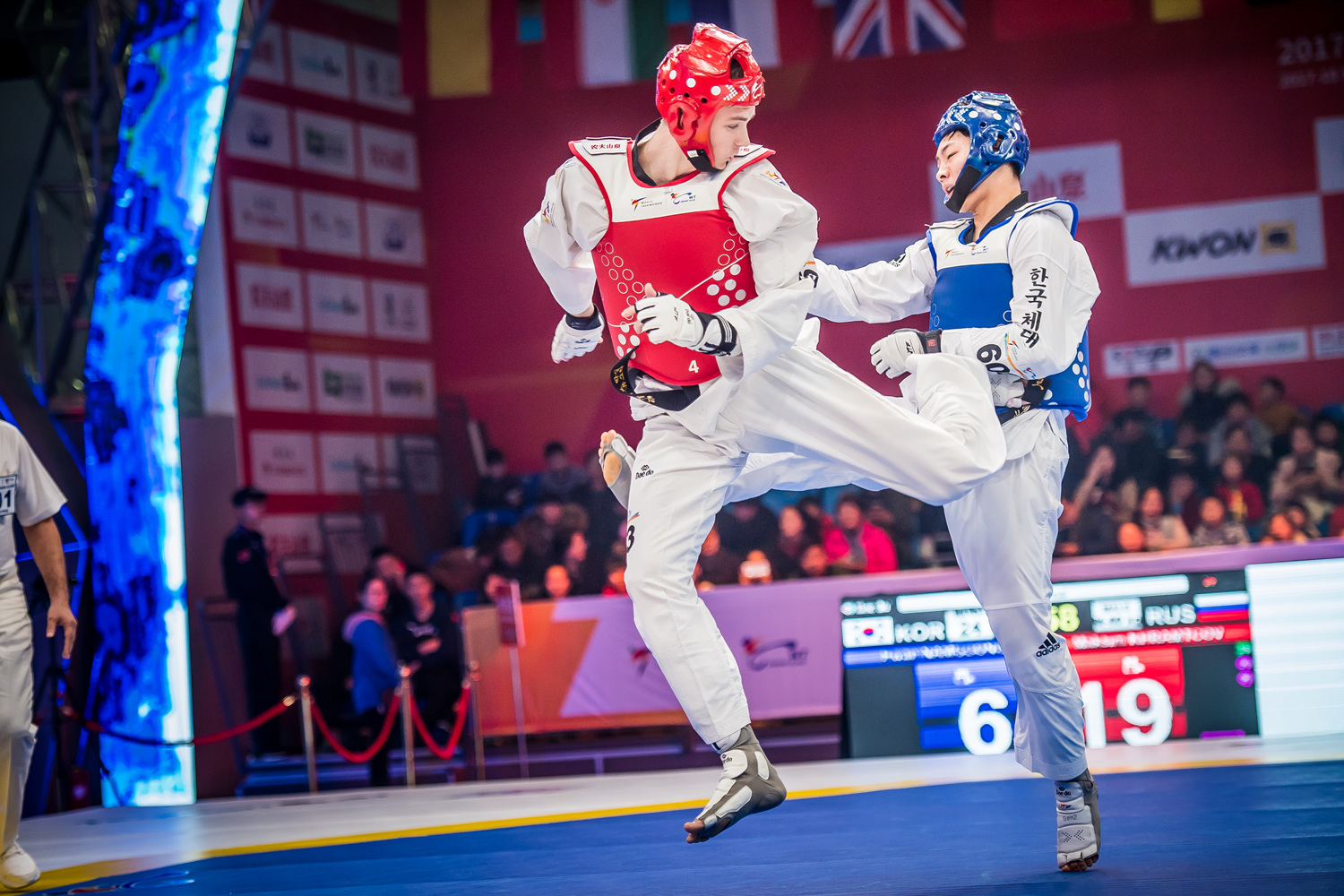 Then the party started. As the audio system blared the Liverpool lass’s hometown song – The Beatles’ “Hey Jude” – her long-time beau, Aaron Cook, stormed onto the mats and hefted Walkden aloft. In a victory celebration like no other, the “Queen Bee” hurled her shin protectors into the crowd and ended the affair with a series of somersaults on the mats. In the post-match interview, she made clear what she would do with her prize money: “Now, we’ve got a house!” she yelled. 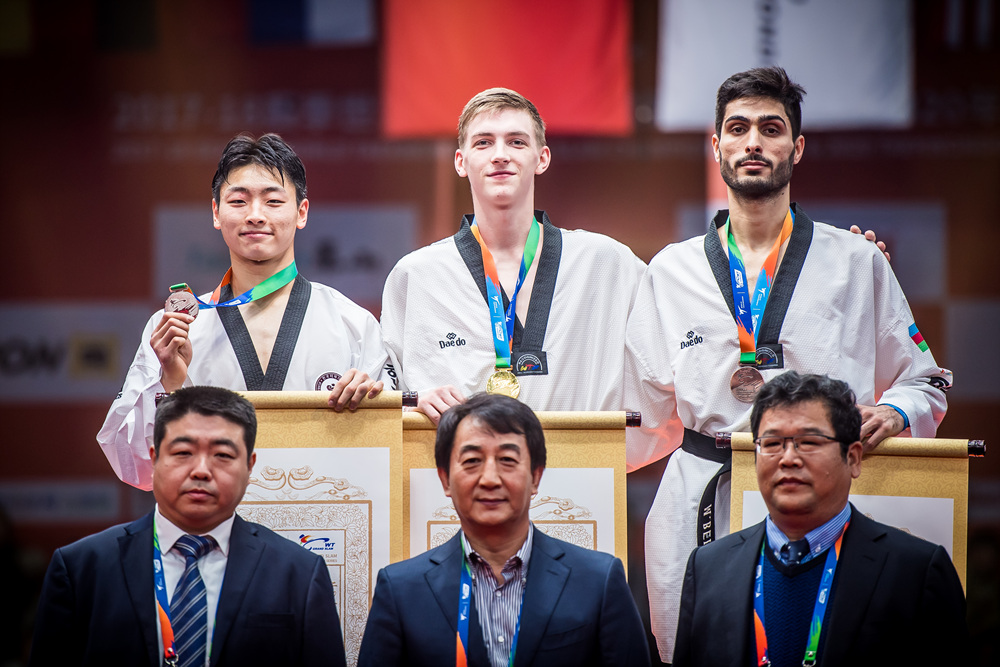 In the female bronze medal match, Poland’s Aleksandra Kowalczuk took on Kus of Turkey. The two appeared evenly matched, but it was Kuswho opened the scoring with a body kick, while the Polish girl threatened with high kicks. Round 1 ended 2-0 to the Turk. Kowalczuk evened the score early in the second, before “The Amazon” drew ahead, taking the round, 6-2. The third found featured the most action, but it ended with Kus winning a convincing 11-3 victory. 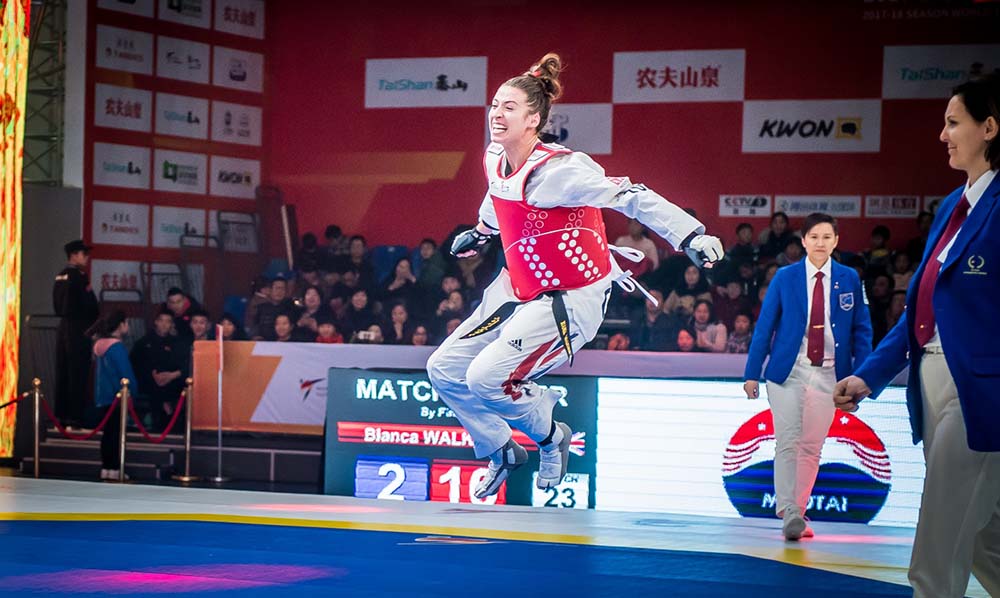 In the final of the men’s category, Korea’s 19-year-old Namgoong took on Russia’s Khramtcov. It looked like a David and Goliath mismatch: The Russian towered over Namgoong by at least a head. He went up with a high kick – 3-0 – then sent the Korean flying with a body kick, before landing another head kick from the clinch. Khramtcov lost one penalty point, then ate a couple of Namgoong’s body kicks; the first ended 11-4 to the Russian. In the second, the Korean went after his man, fighting a very physical match against his bigger opponent, mixing combination attacks to the body with kicks to the head. But the Russian’s high roundhouse and crescent kicks kept landing, while his side kick kept Namgoong off balance. The second ended 23-9 to Khramtcov. In the third, Namgoong continued to take the fight to his opponent, trying to break into close range where he had the advantage, and wielding a textbook back kick. But the Russian kept landing to the head and the third closed 32-19 to Khramtcov. Great action! 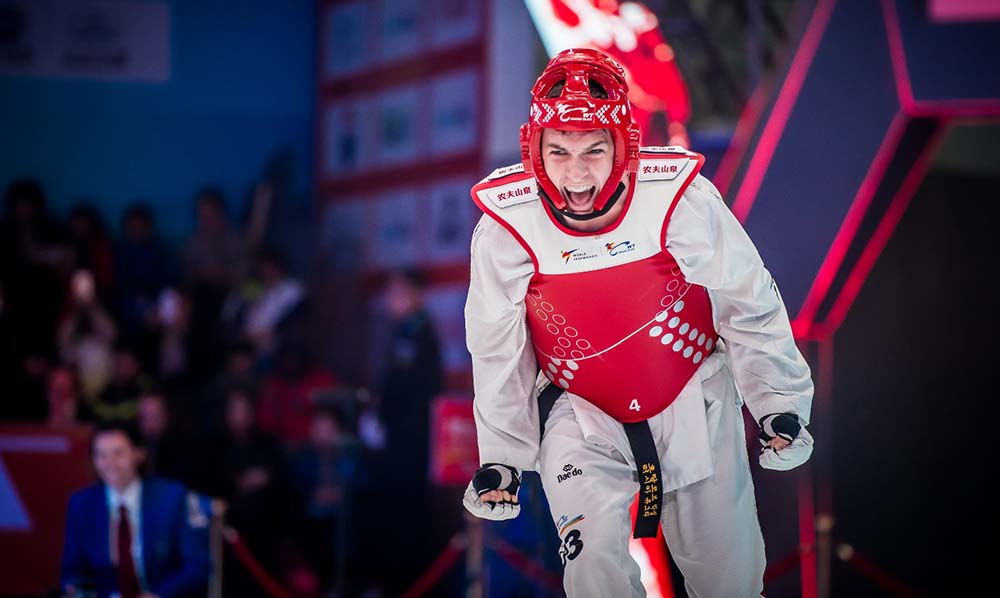 In the penultimate round, both lads looked tired and the pace slowed, but the Korean deployed some effective body kicks under and around the Russian’s high-line attacks. The fourth ended 34-22, Khramtcov. In the final round, the Korean landed a head kick from the clinch – a real feat against a fighter as tall as the Russian – then repeated the technique, raising his score to 28,then 29 as the Russian was penalized. In the last 30 seconds, the work rate increased before, in the final seconds, Namgoong – bleeding from a facial injury and panting heavily– finally gassed out. It was a superb win for the Russian – 35-29 – but also a tremendous underdog performance from Namgoong who is definitely a face to watch.

In the male bronze match, Russia’s Anton Kotkov went into battle against Beigi of Azerbaijan. The two are of roughly equal height; Kotkov is one of the most accurate kickers in the game, while Beigi is a stylish player with superb flexibility. Mindful of the match duration, the two took it easy in the first, but Beigi found the range and ended the first round 4-0 up. In the second, both dueled with head kicks, but neither connected; the round also ended 4-0. The Russian ended his point drought in the third with a body kick, and the round concluded in a heated exchange, as the Azeri rattled Kotkov’s teeth with a side kick to the face. The round ended 10-5 to Beigi. The fourth saw a higher work rate, with Beigi extending his lead to 14-6. In the final round, Beigi pulled off an impossible technique – a high kick that flicked down to the torso – and continued to jam Kotkov’s attacks, while his fast legs continued to do their work. The match ended 17-7: A relaxed and highly professional performance by Beigi. 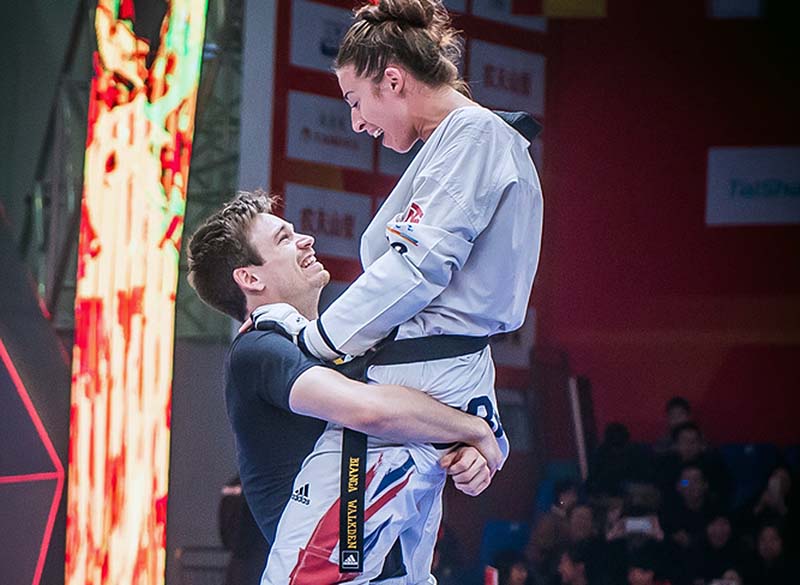 The second edition of the Grand Slam series takes place next Saturday, Jan. 6, in Wuxi with the men’s –68kg and the women’s -67kg categories being contested.