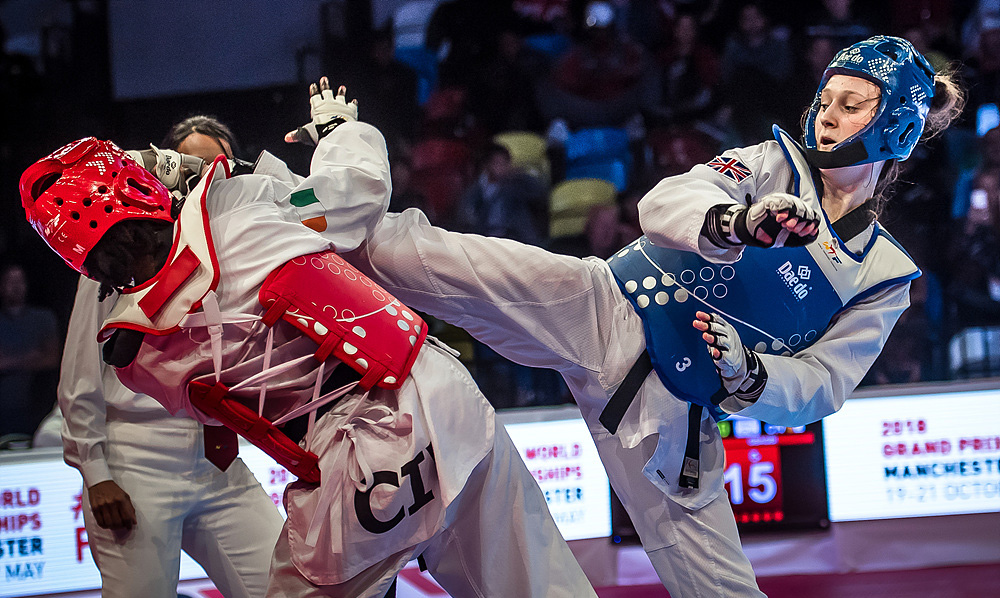 Taking place in the London 2012 Olympic venue, The Copper Box, the crowd summoned memories of the famous Olympic Games with their loud and passionate support. Spectators were assisted by the ‘Power Bar’, which was introduced by World Taekwondo for the very first time as part of the federation’s commitment to enhancing fan engagement and making the sport easier to understand. The ‘Power Bar’ provided fans with a visual representation of the strength of the athletes’ strikes, allowing fans to understand why some strikes registered points and others did not.

It was the first ever gold medal at a World Taekwondo Grand Prix for all three gold medallists with Ahmad Abughaush from Jordan winning gold in the male -68kg, Lauren Williams from Great Britain winning the female -67kg category and Korea’s Kyo-Don In winning the male +80kg. All three winners will automatically qualify for the newly established World Taekwondo Grand Slam which will take place in Wuxi, China.

Ahead of the semi-finals and finals, a moment’s silence was paid to respect Un Yong Kim, Founding President of World Taekwondo, who passed away on October 3, 2017.

The men’s -68kg final saw Olympic champion, Ahmad Abughaush from Jordan, face Great Britain’s young Bradly Sinden. Both fighters started quickly, attempting a number of head shots without success. After a scoreless first round, the second round continued along similar lines with the two fighters remaining composed as they looked to take a foothold in the match. With just 20 seconds of the second round remaining, Abughaush took the lead with a punch only to be pegged back immediately by a kick to the body protector from Sinden. Abughaush took the lead 3-2 in the third round but a head kick restored Sinden’s lead. A quick reply from Abughaush with a kick to the trunk protector saw the match finish out at 5-5. A golden point round was needed to settle the match but with a few seconds remaining it looked like neither fighter was going to land the golden point, only for Abughaush to manage it in the dying moments. 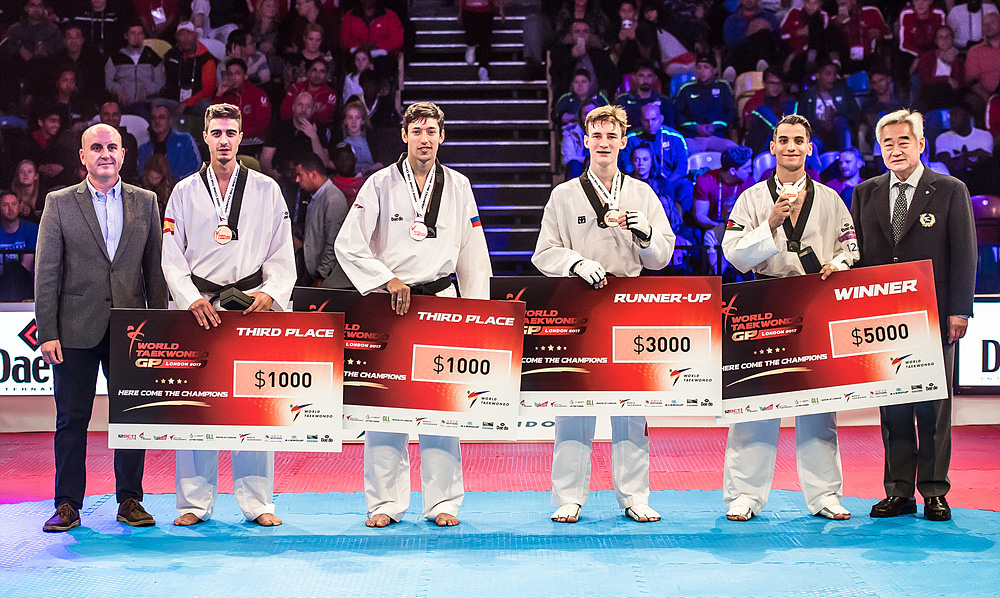 The finale of the female -67kg produced the fight of the Grand Prix so far. Current World Champion Ruth Gbagbi from Cote D’Ivoire took on Lauren Williams from Great Britain in the final. Both fighters started very quickly with Williams taking an early 3 lead; however, the points were deemed to have been scored illegally by the referee and the score was reduced to 3-1 to Williams. After a frantic first round, Gbagbi finished 15-13 up. A push kick from Williams at the start of the second round gave her one point to close the gap and set the tone for a second round which saw Williams land two head shots and four kicks to the trunk protector to go into the final round 31-15 up. Cheered on by a jubilant home crowd Williams looked to continue where she left off scoring a punch early on followed by a kick to trunk protector and another punch. A Gam-jeom took the score to 36-15. Gbagbi fought back landing a number of kicks to the trunk protector and a headshot but it wasn’t enough and Williams claimed the gold medal with a 43-23 victory. 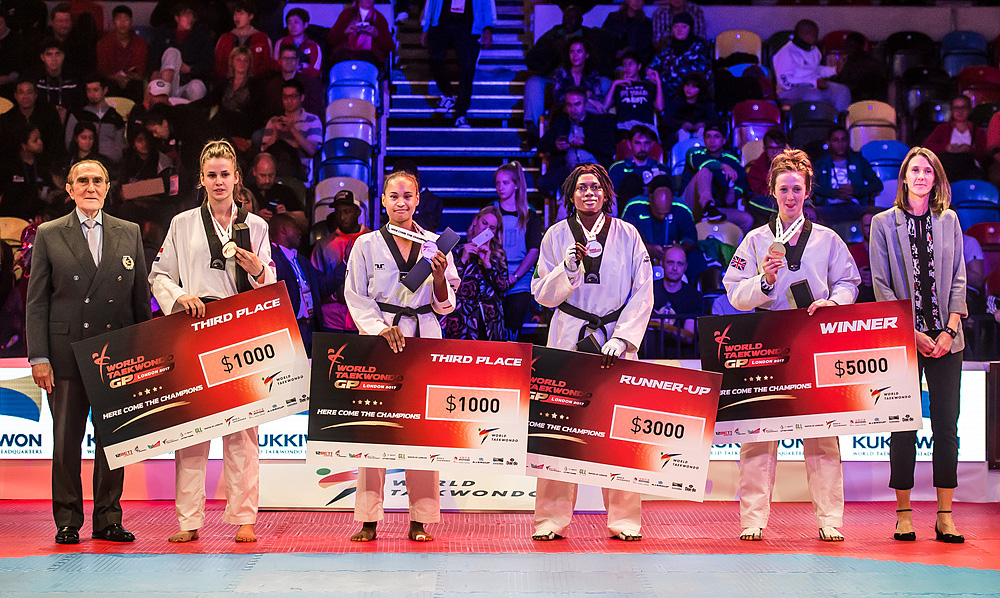 The bronze medals were won by Matea Jelic from Croatia and USA’s Paige McPherson. Williams and USA’s McPherson met in the first semi-final just a few weeks after having fought each other in the final of the President’s Cup in Las Vegas. Williams had come out on top on that occasion and while McPherson hoped to avenge that defeat, she was not able to overcome Williams despite a valiant effort and lost 32-26. In the second semi-final Gbagbi had come up against Jelic. After a tight and tense match Gbagbi came out the victor with a score of 7-6.

In the male +80kg, the relative new comer, Rafail Aiukaev from Russia, took on Korea’s Kyo-Don In who came into London on the back of a bronze medal at the Grand Prix in Rabat and silver in Moscow. In took an early lead with a kick to the body protector followed by a head shot to take a 5-0 lead. A Gam-jeom from both competitors saw the first round finish 6-1. Both competitors landed kicks to the trunk protectors at the start of the second round and were both penalised with a Gam-jeom giving In a 9-4 lead. Aiukaev brought it back to 9-6 which it finished in the second round. The third round followed a similar pattern. Gam-jeom’s for both fighters at the beginning of the third round kept the gap at three points. Chasing the match, Aiukaev attempted a spinning kick but fell to the matt resulting in a Gam-jeom and was penalised again for a kick beneath the waist. With 10 seconds to go In finished with a flurry as he landed a head kick to win the match 15-8.

The bronze medals were won by Great Britain’s Mahama Cho and Iran’s Sajjad Mardani. Cho had met Aiukaev in the final and despite coming into the match on the back of a gold medal at the Grand Prix in Rabat, he was unable to make it to the final and lost 8-5. The second semi-final match was fought between Mardani and In. Mardani led for long periods of the match but In came from behind in the third round to take the score to 5-5 and force the match to a golden point round. Neither fighter was able to land a golden point and so it went down to the PSS and which fighter had registered the higher number of hits in that final round, which was In with two.