In a letter to the presidents of the state association from the TKD Mexican Federation (FMTKD Federación Mexicana de Taekwondo), the highest institution in Mexico, warned members that, those who want to go abroad to compete must have a series of requirements.

“With this letter we offer you cordial greetings, at the same time we want to communicate that in order to receive endorsement for International Competitions and Seminars, you have to complete the next requirements:”

In two paragraphs they summarized the guidelines set by FMTKD on August 7, however without a signature from an official in the organization, instead being stamped with the official logo of the institution. 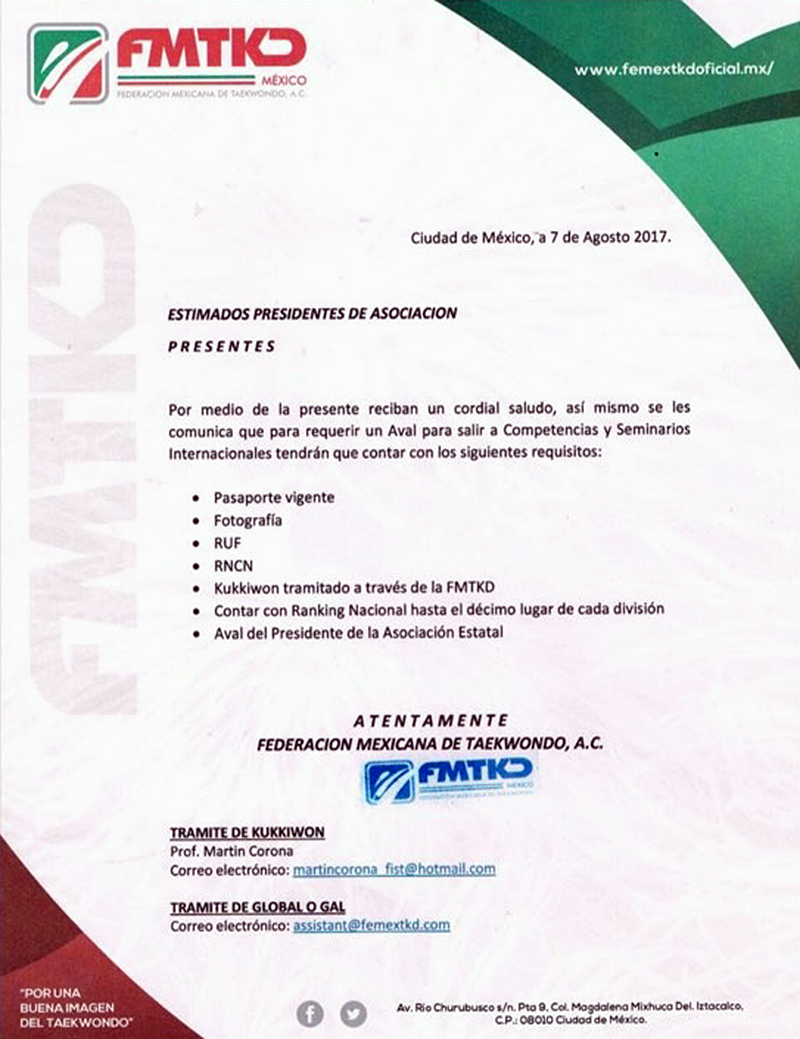 This comes only a month before the Costa Rica Open G1 and few weeks before the Argentina Open G1, which disturbed the governing institutions of Taekwondo.

Through an e-mail, which MasTKD was given access to; Choi sent González direct orders to remove the requisites.

Choi’s message was about the participation of Mexican athletes and he was very specific when he refers that the guidelines were meant to prevent the athletes from participating in the Open in Costa Rica.

“Dear President Raymundo González, it has come to our attention that FMTKD is not allowing Mexican athletes from Participating in the Costa Rica Open”, the e-mail began.

Choi reminded him that the rules set by WT and PATU does not allowed anyone to deny access to participation in recognized events.

Choi was very direct and straightforward in his request to González: “Please, send a letter immediately to all members of FMTKD, to authorize any and all athletes’ participation in all WT- G events; and publish the letter on the [FMTKD] website”

Choi also brought up how many athletes had already spent money and made plans to participate in the Costa Rica Open.

“Many athletes have already booked their flights and hotel reservations for the Costa Rica Open; if you deny their registration and participation due to the unjust regulations from the FMTKD, your federation will be completely responsible for all damages to athletes and for any legal actions taken in retaliation.” Choi warns.

According to Wilmar Alvarado, president of the Costa Rican Taekwondo Federation (FCT – Federación Costarricense de Taekwondo), there were expecting 200 Mexican athletes for the event in September.

“We had 200 expected athletes from Mexico, as for Yesterday (August 16th) we have 114 confirmed. We are very worried about the FMTKD decision, because it does affect the participation.”

The FCT president was in agreement for certain rules, such as the removal of the federation’s responsibility for accidents; but against the requirement to be in the top ten national ranks.

The concern of the PATU’s president comes from the belief adopted by WT from the International Olympic Committee (IOC) that no athlete will be left behind.

“Since PATU and WT support the movement by the IOC, […] no athlete will be denied participation from any international event recognized by WT and PATU” asserted Choi.

The only events to which participation can be restricted from would be multi-sport events in which only the national selections can compete.

The G events are all events which guarantee an awarding of points towards and Olympic and world rankings.

MasTKD has contacted Raymundo González, but as of the publication of this article we have not received responses to messages sent to his WhatsApp.