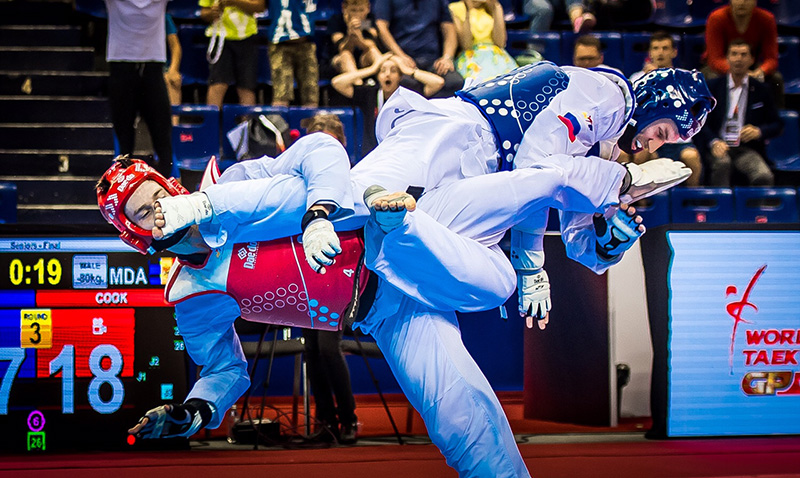 Tae-Hun Kim from Korea won gold in the male -58kg, Panipak Wongpattanakit of Thailand took the top honours in the female -49kg while Russia’s Anton Kotkov secured gold in the -80kg much to the delight of the home crowd. All three fighters will have the added bonus of now being eligible for the World Taekwondo Grand Slam in Wuxi, China.

Following on from an excellent first day of competition yesterday, fans on day two were not left disappointed as they were treated to the fight of the Grand Prix so far and matches of very high quality.

In the male-58kg final Korea’s Tae-Hun Kim continued his successful year by taking gold after Ramnarong Sawekwiharee from Thailand was forced to withdraw before the fight began due to injury. Sawekwiharee had fought well in the semi-final but it had clearly taken its toll and left him unable to compete in the final.

Mohammad Kazemi from Iran and Jesus Tortosa Cabrera from Spain won the bronze medals. Kazemi met Kim in the first of the two semi-finals. Kim showed his dominance early on take the lead and finished the first round 6-0 up. Despite Kazemi’s best efforts, the second and third rounds followed a similar course and Kim came away the victor with a score of 25-4.

Tortosa Cabrera and Sawekwiharee matched up in the second semi-final and produced a highly entertaining match for the enthusiastic crowd. Sawekwiharee came out stronger and landed an early kick to the trunk protector before two Gam-jeoms gave him a 4-2 lead at the end of the first round. A head kick brought Tortosa Cabrera back into the match and he finished the second round 8-6 up. In the final round he extended his lead but Sawekwiharee finished strongly to win the match 18-12. 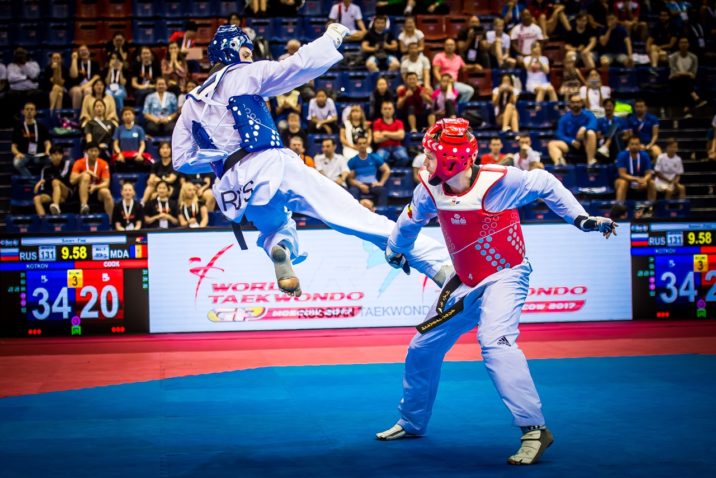 Camila Rodriguez from Colombia and Serbia’s Tijana Bogdanovic shared the bronze medals. Rodriguez took on Kim in the semi-final. Both fighters put up a strong defence with Kim the only one able to land a valid kick in the first round giving her a 2-0 lead. The second round saw much of the same high-quality defence leaving the score at 2-0 at the end of round two. With a minute left of the third round, Kim stepped it up a gear and landed a succession of kicks to the trunk protector, extending her lead and giving her the victory with a score of 13-0. In the second semi-final Bogdanovic fought Wongpattanakit. The closely ranked athletes missed each other at the Rio 2016 Olympic Games but Bogdanovic had won Olympic silver while Wongpattanakit secured bronze. Everyone anticipated a close fight between the two in Moscow; however, Wongpattanakit was in excellent form and delivered three kicks to the trunk protector in the first round to take a strong early lead. In the second round she extended her lead even further to 19-1. Bogdanovic did her best to fight back but Wongpattanakit was too good on the day and in the end took the match with a score of 33-3. 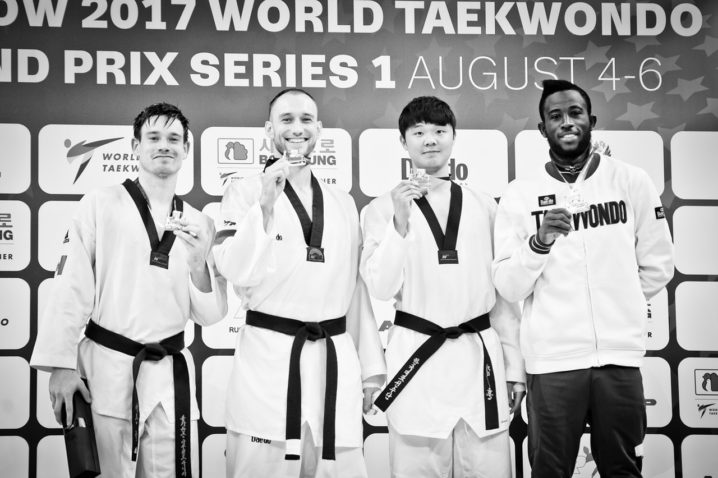 The final of the male 80kg brought together Moldova’s Aaron Cook, who went into the Grand Prix as the number two seed, and Russia’s Anton Kotkov, who had already produced a shock victory against Olympic gold medalist Cheick Sallah Cisse in the semi-final. The nerves of the crowd were apparent in the first round with Cook keeping Kotkov at bay and giving the Russian fans little to cheer about. In the second round Kotkov took the lead for the first time only for Cook to land a kick to the trunk protector and regain the advantage. With one second of the second round remaining, Cook landed a spectacular combination of a turning kick to the head and kick to the trunk protector to give him six points and go into the final round 11-8 up. The two fighters produced undoubtedly the best round of the Grand Prix so far in the final round as Cook who had gone 15-12 up in the opening stages of the round was pegged back to 15-15 by a head kick from Kotkov. From there there was a flurry of acrobatic and breath-taking kicks from both fighters with the partisan crowd producing an electrifying atmosphere. But it was Kotkov who was producing more successful kicks and took a significant 12-point lead. Cook fought back strongly and both fighters gave their absolute all, however, for Cook it was not enough and Kotkov won the match 35-26 and also won the hearts of the crowd.

Cheick Sallah Cisse of Cote D’Ivoire and Korea’s Hun Kim won the bronze medals. Many had expected Cisse to progress to the final and as he took an early 3-0 lead against Kotkov in the semi-final it looked like the match was headed the way it was expected. However, Kotkov fought back and utilised the punch well to finish the first round 9-3 up. Kotkov continued to make the most of the punch in the second round but two head kicks from Cisse helped him to a 12-10 lead at the end of the second round. The final and highly entertaining third round was all square with 30 seconds left, but the home crowd got firmly behind their man to give him the energy for a late surge. With little more than 10 seconds to go Kotkov once again made the most of the punch to go 15-14 up and then landed a kick to take the match 17-14. In the second semi-final Kim fought Cook. Both fighters came out very quickly scoring 4 points each within the first 45 seconds, but it was Kim who finished stronger taking the first round 9-4. Cook tried to fight back but could not overcome the deficit as the second round finished 11-6. In an exciting and tense final round, Cook went on the front foot and with less than ten seconds on the clock landed a successful kick to draw the score and take it to a fourth round. In the final round both fighters attacked from the off but it was Cook who connected and won the match on a golden point, 15-13.