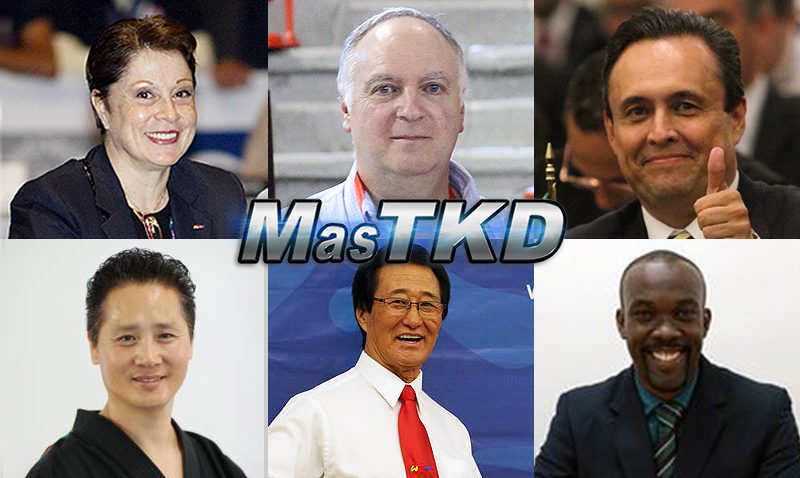 The official list of candidates to fill positions within the WTF Executive Board was announced early today.

The candidates from the American continent who submitted their documentation are:

According to thorough statistical and profile analysis made by MasTKD, along with some surveys, it was concluded that Maria Borello (only female candidate from America) and Mario Mandel have their positions within the WTF almost a hundred percent guaranteed. The remaining position could be filled with someone holding a Mexican passport.

The inconvenience is that Mexico presented two candidates: Juan Manuel López Delgado and Dae Won Moon. Neither of them has a position within the Mexican Taekwondo Federation, but this requirement is not necessary as it is a re-election. Lopez Delgado´s background shows his administration leading the Mexican Federation from 2009 to 2016. He is very popular and recognized worldwide and he is – and will continue to be, because he is the only candidate – Vice President of the Pan American Taekwondo Union for North America, something that gives him greater chances to continue being a WTF Council Member.

PATU Elections: Which positions are at stake?

Inseon Kim, a well-known American master and president of the Texas State Taekwondo Association, also wants to become a member of the WTF Council. However, according to sources close to MasTKD, he would not have received the support of the USAT and thanks to a legal gap in the WTF statutes, he was able to ask for the support from the National Federation of Canada.

Apparently the name of the sixth aspirant is new in the Taekwondo political environment. Henderson Turton from Barbados, is looking for a position within the WTF. Henderson is the last candidate from America. It is worth mentioning that he is a novice in the sports leadership area as his career began on January 27, when, in an extraordinary assembly meeting, he won the presidency of the Barbados National Federation. According to information in the Barbados Federation official web site, he has a ten-year experience in the world of finance auditing.

MasTKD will continue the complete coverage of the WTF and PATU elections. Stay tunned.