It saw United Nations troops under the command of General Douglas MacArthur launch a surprise landing hundreds of miles behind enemy lines in Incheon to outflank their North Korean opponents and beat them into a hasty retreat.

The International Olympic Committee (IOC) Executive Board decision to officially consider awarding both the 2024 and 2028 Games to Los Angeles and Paris later this year is another audacious gamble attempted on South Korean soil.

Time will tell whether it will prove similarly effective.

IOC President Thomas Bach certainly seemed to have recovered some of his swagger when announcing the plan.

Gone was the sarcasm and adversarial nature of his press conferences in recent months. Back were the jokes and warmer answers typical of his first two years in power. It also seemed significant that, unlike last year, he stopped to talk to us in the media every time we approached him.

He was no doubt enjoying a rare opportunity to take the initiative and launch a proposal of his own rather than reacting defensively to events.

Some things, however, never change.

“I could answer you with one word,” Bach responded when asked if the Working Group he had set up to consider bidding reforms would specifically look at awarding two Games at once.

“Everything is on the table.” 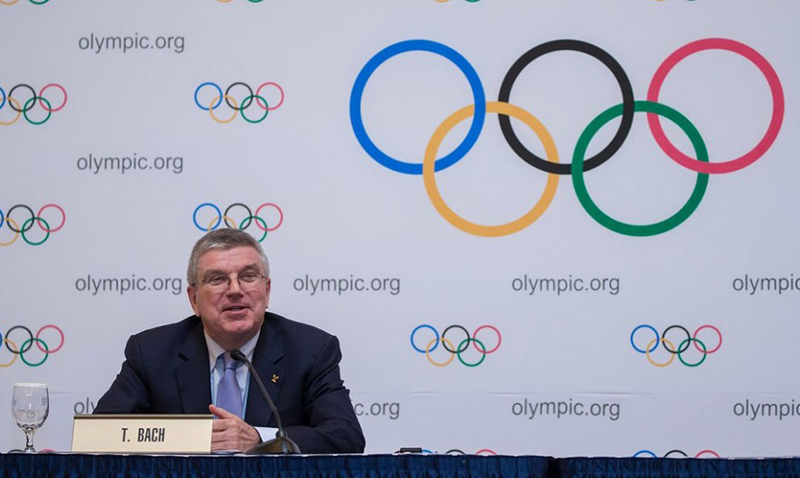 The German lawyer is certainly not a man for one word responses. The devil is always in the detail and, to understand an IOC decision, you must focus on the small-print rather than the headline.

But the underlying tone was clear. This was especially so when I, rather foolishly, decided to raise Rule 33.2 of the Olympic Charter, which stipulates that “save in exceptional circumstances, elections take place seven years before the celebration of the Olympic Games”.

“I am one of the co-authors of the Charter and I know that it offers some flexibility,” Bach replied, his face betraying the slightest hint of a smirk. “Not only in this respect but in general. We always have to have room for interpretation to adapt to changing times.”

Somebody braver than me could have demanded back the microphone and asked why the Charter had suddenly become flexible when last year Bach insisted there was no provision for allowing Russian whistleblower Yuliya Stepanova to compete neutrally at the Rio Olympics, but there was only going to be one winner in a legal tête–à–tête.

And, on this occasion, he had a point.

In many ways, his performance was something of a masterstroke. By setting up a Working Group consisting of his four vice-presidents, Bach could avoid answering any technical questions and could simply say “it is up to them to decide”. Once they present at the IOC Candidate City Briefing in Lausanne in July, he will no doubt sit back and humbly accept the democratic will of the membership.

But, make no mistake, Bach is well and truly in control. He is not just turning the steering wheel and pressing the accelerator, but he is building the car in the first place. 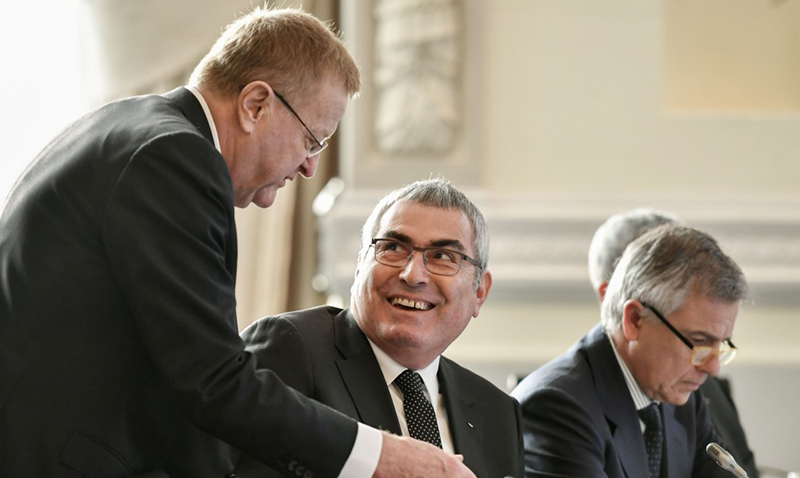 You can rest assured that any decision made will be one he supports.

There are some fascinating sub-plots here. Three of the four vice-presidents – Australia’s John Coates, Turkey’s Uğur Erdener and China’s Yu Zaiqing – all voiced concerns or outwardly opposed the idea as recently as February 20.

Have they changed their minds or have they succumbed to the politics of pressure?

One, who asked to remain nameless, said before the meeting that his “personal view” remained unchanged but that he had spoken to the President and been “informed that a joint-awarding was technically possible”.

Coates, Erdener and Spain’s Juan Antonio Samaranch each took the unusual step of attending the closing press conference of the Pyeongchang 2018 IOC Coordination Commission in an apparent show of support for Bach. All three come from countries thought to be considering bids for 2028: Brisbane for Australia, Istanbul for Turkey and Madrid for Spain. In fact, with China invariably an emergency bidding option these days, you could probably extend this to all four.

A conflict of interest such as this would seem strange anywhere else, but is part of the rough and tumble of international sport. (For the record, American Executive Board members Angela Ruggiero and Anita DeFrantz were asked to leave the room for the discussions).

Few of the potential 2028 bidders seem particularly reliable or desirable. Australia is perhaps the sole exception, but surely could be persuaded to wait until 2032. There are bound to be grumblings about changing the process halfway through, both internally within the sports world and externally in the press and public. Yet, if the merits of the decision are presented well, I think most people could be persuaded that the benefits outweigh the risks.

Given how two of the few IOC backbenchers to have challenged Bach in recent times – Canada’s senior member Richard Pound and Britain’s Adam Pengilly – have both already publicly supported the idea, then you cannot expect many others to go against the grain.

The biggest challenge for me relates to the logistics of Los Angeles and Paris. 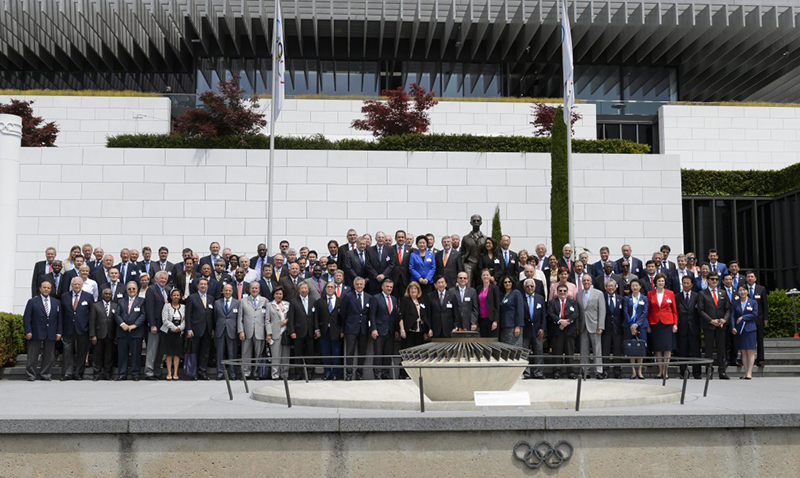 Paris have only negotiated their contract to develop the Athletes’ Village site on the banks of the Seine in Saint Denis for 2024. They claim it would be impossible to delay it by four years. Los Angeles initially seemed slightly more open to the 2028 idea, but they are also now claiming how their declarations of support only concern the earlier Games. United States President Donald Trump is thought to be a firm supporter of the bid, but will he want to bow out with an Olympics at the end of two triumphant terms rather than leave the glory to a successor?

And, it goes without saying, a victory for National Front leader Marine Le Pen in the French Presidential run-off in May would impact Paris to at least some degree.

How would you then decide between the two? Would they do some sort of deal, with one city withdrawing from the process before the September 13 vote in Lima? Or will they have the 2024 vote as normal before the loser is given the opportunity to host the later event?

Then what of the extra costs of maintaining an Organising Committee for 11 rather than seven years? Will sponsors be allowed to associate with the Olympic brand for extra time? Will the IOC Evaluation Commission make inspections based just on 2024 or on the longer time frame?

The permutations are endless.

You wonder how Coates, in particular, will have time to ponder these issues alongside his many other responsibilities, including being President of the Australian Olympic Committee, chair of the Tokyo 2020 Coordination Commission and head of the Court of Arbitration for Sport? Not to mention his non-sporting business interests?

It is also worth remembering that awarding two Olympics at once would not solve the IOC’s problems. It would merely provide breathing space and avoid alienating two important markets.

The IOC continue to blame bidding apathy on our uncertain economic times and the rise of anti-establishment populism rather than on any fundamental opposition to the Olympic Games.

Bach, thus presumably, hopes that these two factors would be reduced by the time the 2032 process begins. If he serves a full second term, those Games could be awarded at the same 2025 IOC Session where his replacement will be elected.

There, however, are certainly other factors at play.

The IOC and Bach are still seen as elitist and out-of-touch in many of the places most likely to launch Olympic bids. This has been made worse by an uncertain response to the Russian doping scandal last year, as well as corruption revelations emerging from the ongoing French police probe into Bach’s former ally, the former International Association of Athletics Federations President Lamine Diack. 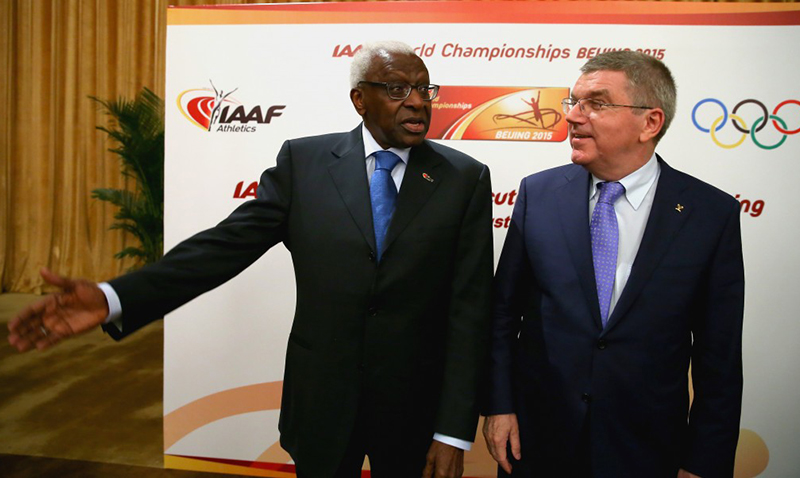 The Olympic Games itself, while still hugely popular, have bloated in size and scale to the point where they are harder than ever to bid for and host. Bach’s Agenda 2020 reforms in 2014 showed an awareness of the problem yet proved unable to make a meaningful difference.

Given all of this, the IOC Executive Board made the right decision last week, taking the initiative and setting into motion one genuine reform. Plenty more challenges remain, though. It is also still possible that changing circumstances could scupper the 2024 and 2028 plan.

Douglas MacArthur, the general responsible for masterminding the Incheon landing in 1950, was removed from his position the following year by United States President Harry S. Truman after ignoring his superiors and marching northwards towards the Chinese border.

Military strategy is very different to sports politics, but the IOC and its President would do well to learn this lesson about the dangers of overreaching when they consider their next move.