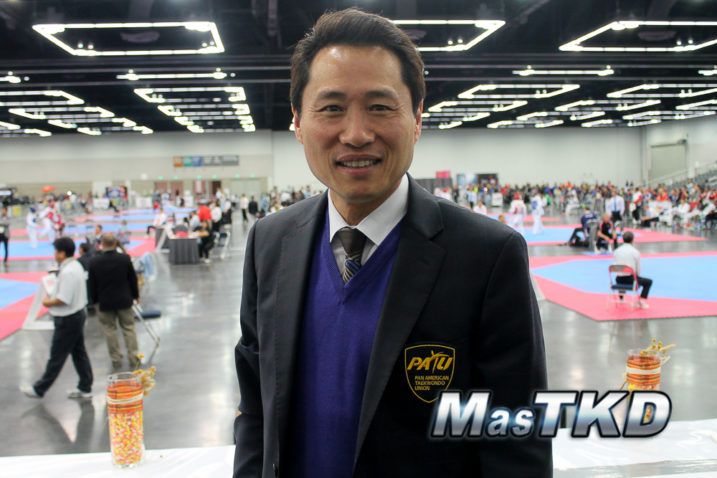 It’s a pleasure to meet with you President Choi, we want to know what is your opinion about the development of this first President’s Cup in Pan America?

I am extremely happy with this first event. It exceeded our expectations.
The concept of the President’s Cup was originally my idea, which I proposed to the WTF few years ago and it took a long time, but finally they approved it; for that this year, The President’s Cup has already been made in Europe, Oceania and America simultaneously.
The participation at the event in Europe was approximately 1000 athletes, but here we had more than 2000 athletes, including color belts, so it has been a great success and that is why I am very happy.
As you can see, the tournament has developed smoothly; coaches and athletes who I’ve asked said they are very satisfied, so I’m also satisfied: “makes me happy to know that they are happy.”

It has already concluded an Olympic cycle and with the advent of this new process for Tokyo 2020, how is PATU preparing for this new challenge?

I am very excited and interested to see how competitors will adapt to the changes. For the first time, we invited to all Olympic coaches to Seoul in Korea; and during four days, there were group discussions, until they could finally submit a proposal. The WTF is reviewing this proposal and the final approval will be given in Canada before the Junior World Championship next November. Once it’s approved, it will be put into use immediately.

So I am very optimistic about the new rules of competition and the various changes that would make it better for competitors.

Talking of changes, what is your approach about these changes?

My biggest concern as far as scoring system was involved with giving a very high value on face kicks as 3 points. That system was very good, however, it was very disadvantageous, especially for Pan American athletes, with the exception of the American and Canadian athletes, most are very small, and once they lose one face point, it’s very hard for them to recover 3 points,
But with the new changes, I think that will allow more equality as 2 points will be awarded to a kick to the body and the turning kick to the body would be extra point, so it would be equivalent to one head kick. So it will be easier for athletes with the disadvantage of height, recover lost points.

During the coaching seminar that just ended here in Portland, it was reported about the new events categories “premiere”, could you detail how those will function?
Yes, initiating 2017 this event with be President’s Cup “Premiere”.
“Premier” meaning beginning next year, the maximum quota an athlete can get per event will be 40 points rather than 60 points. So if they get 40 points through any G1 or G2 events, they are done, and can’t get any more points. But only once a year, with the ‘Premiere’ event, they can get additional points. Because this is a G2 event, if an athlete accumulated 40 points and if they come to a ‘Premiere Event’ and get a gold medal, they get 20 extra points. That would be a good advantage for Olympic preparation.

As I mentioned, this will be a ‘Premiere’ event, and will indeed be “Premiere” category, unique in -America. The event number one in America, which will go hand in hand with the Pan American Championships (for the official competition of all national teams) and this, that allow the participation of all members from different clubs. This will be the development tournament for athletes who are emerging and will be the future national champions.

So there will be an official tournament and a tournament for the development of athletes.
I’m very happy about the development and we have had many meetings with different country leaders. Next year I heard that Mexico is committed to bring about 1000 competitors to this event.

It is a confirmed venue?

For your information, starting next year this event will be held at the Convention Center of the Las Vegas Westgate Hotel, in Las Vegas, Nevada, which is a very large convention center. We have just signed the contract to present this event there every year on October for “Columbus Day” weekend. So now everyone knows that on the weekend of “Columbus Day”, each year will be held the President’s Cup Premiere in Las Vegas. This way people can start making reservations and preparing in advance to participate.

Also, I’m excited to include the color belt division next year. All red belts, blue belts, our future black belts will have their first experience in international event, so when they become a black belt, their process will be faster to becoming elite athletes. So we are trying to include as many athletes as possible for their dream of becoming an Olympic athlete.

Thank you for your time president Choi