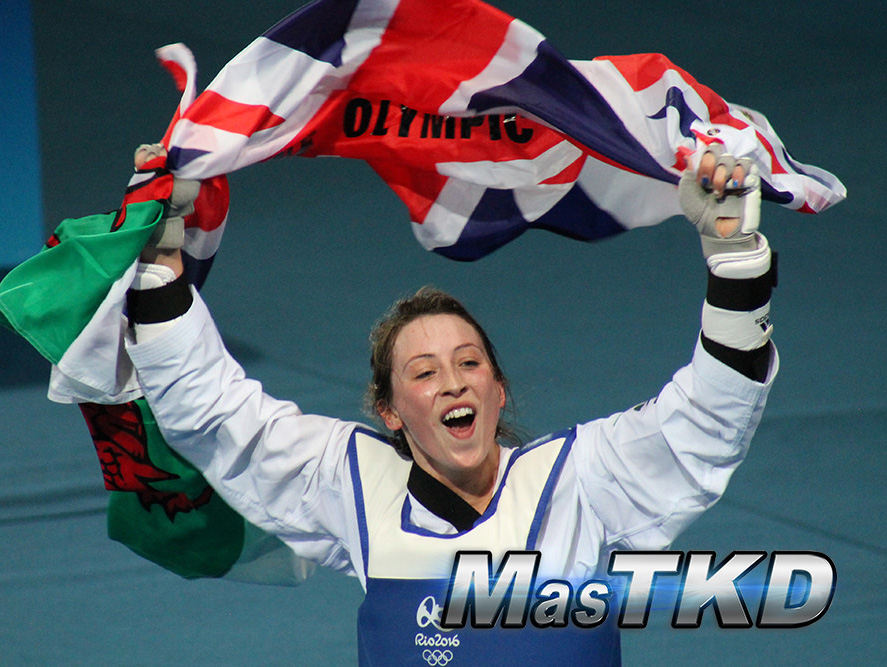 And as part of a strong campaign to host the 2019 World Championships at the globally recognised Manchester Arena, the bidding partners of GB Taekwondo, UK Sport, Manchester City Council, the Mayor of London’s office and British Taekwondo want to land two more major international competitions.

Having earned plaudits from the World Taekwondo Federation, the world’s governing body, for staging WTF World Taekwondo Grand Prix tournaments in 2013, 2014 and 2015, including the inaugural event in December 2013, Manchester wants more Grand Prix action in 2018.

So, the bidding hat-trick includes a strong case from the capital, host to this year’s National Taekwondo Championships, to bring a WTF World Taekwondo Grand Prix in 2017 to the Copper Box Arena in Queen Elizabeth Olympic Park.

“I have fought all over the world,” said 23-year-old golden girl Jones whose successes have raised taekwondo’s profile to record heights in the UK.

“It was an amazing feeling to retain my title in Rio and to capture the World Taekwondo Grand Prix title in Mexico City the year before.

“But you can never beat the buzz of fighting in front of a home crowd. Even now, four years after winning in London, I still get goose bumps thinking of that day when I won my first Olympic gold medal.

“Yes, there is more pressure to do well but it brings out another level to your performance.

“These iconic cities and our multi-event bid provides the perfect foundation for us to work in partnership with the World Taekwondo Federation (WTF) to strengthen the sport’s international profile and its commercial value.

“We remain committed to supporting WTF in developing Taekwondo across the globe, something these events will help to do.

“And more than anything, London, Manchester and the UK will provide our international athletes with unique and memorable experiences as they will be placed at the very heart of our event planning and delivery.”

It’s not just GB fighters who enjoy competing in Manchester and London.

American Paige McPherson won Olympic bronze in 2012 and has been a regular visitor to Manchester.

“When you find out that a Grand Prix is scheduled to be in Manchester, you know it’s going to be a great event,” said the 2015 World Championship bronze medallist.

“From the sophistication of the arena to the overall hospitality of the Federation, it’s the one event that you don’t want to miss.”

October 21 is the bid deadline with a decision to be taken by the World Taekwondo Federation’s Executive Council in Burnaby, Canada on November 14.

“If we were to be awarded this package of WTF events it would raise the profile of taekwondo in Britain even higher and help attract many new athletes into the sport,” added Rio bronze medallist and current World Champion, Bianca Walkden. “I am confident Manchester and London will put on tournaments that will be brilliant for both athletes and spectators.”

With a determination to produce a portfolio of events aimed at taking the sport to new heights commercially and strategically, the WTF will award upto 30 tournaments from 2017 through to 2021.

“UK Sport is delighted to be supporting GB Taekwondo and the cities of Manchester and London in their bid to the WTF,” said Liz Nicholl OBE, UK Sport’s Chief Executive Officer.

“The WTF’s strategy to deliver ambitious world-class sustainable events mirrors that of the UK and we are delighted to support the bid for this package of events, including the pinnacle World Championships.

“These events, particularly the World Taekwondo Championships in 2019, provide an important platform for athletes to compete on home soil as part of their journey towards qualification for the 2020 Olympic Games in Tokyo.”

Manchester City Council’s Executive Member for Culture and Leisure, Councillor Luthfur Rahman, added: “We have an outstanding track record of hosting major sporting events – including three recent World Taekwondo Grand Prix events – and are certain that Manchester would be the perfect venue for the 2019 Taekwondo World Championships.

“We’re extremely proud to be the home of Team GB’s training base and want to build on their Rio medal haul by inspiring a new generation of local taekwondo athletes – which is why we’re so keen to take the next step by hosting this prestigious event.”

Should the bid be successful, the UK capital will kick things off in October 2017. London and Partners’ Head of Major Events, Iain Edmondson commented: “London is a world class home for all sport and we would be delighted to welcome world class Taekwondo to the Queen Elizabeth Olympic Park. We are also delighted to collaborate with Manchester, another great British city host, to provide a platform for growing the sport following Team GB’s success in Rio”.
NOTES TO EDITORS

GB Taekwondo will be bidding for the following events in partnership with UK Sport, The Mayor of London’s Office, Manchester City Council and British Taekwondo.

GB Taekwondo GB Taekwondo is responsible for the management of the Lottery & Exchequer funded ‘World Class Performance Programme’ and the performance of the Great Britain team competing on the international stage, at junior and senior level , in Olympic Games and World & European Championships.