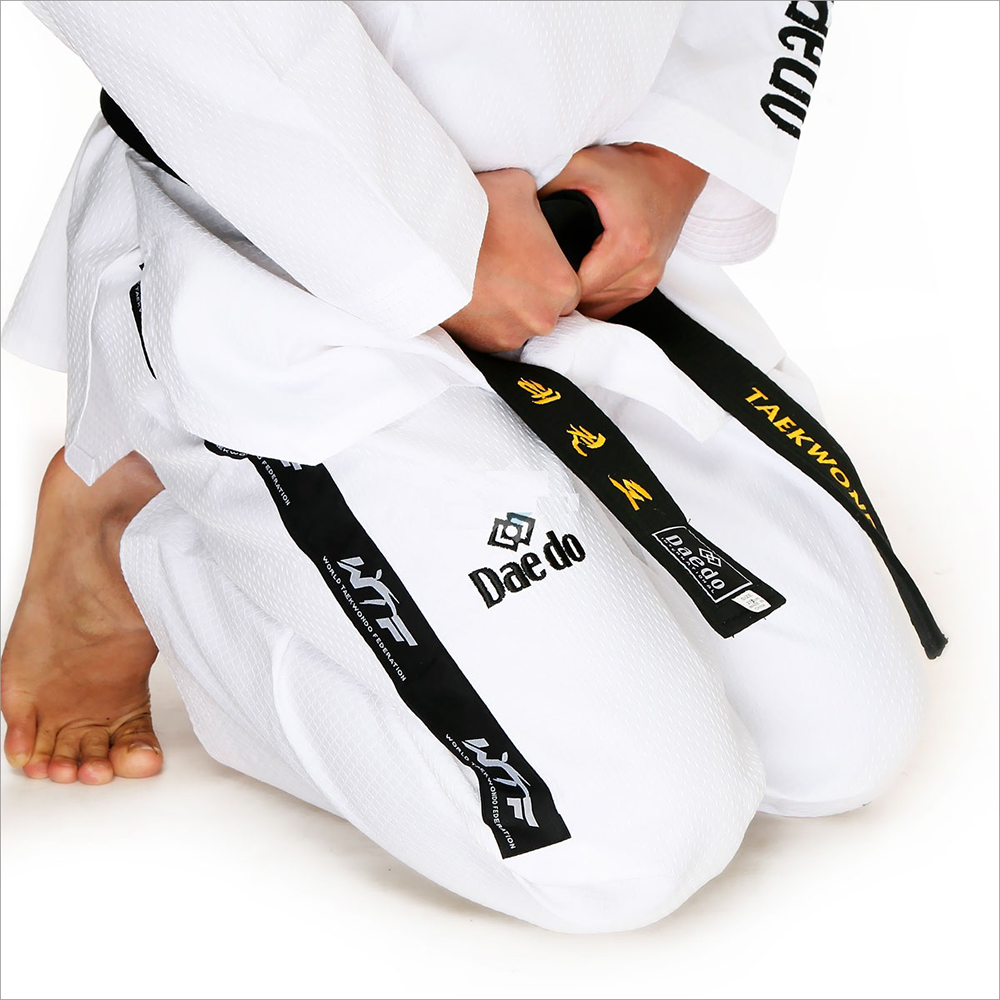 In its etymology “do” translates to “way of life” and “bok” to “training attire”. Consequently, dobok can be translated as “attire for the way of life through training”. It is important to mention that in martial arts training one of the goals is to understand the meaning of suffering and death. Therefore attacking, defending and counterattacking in a sparring match are observed like a real life or death situation.

From this, authors agreed on the oriental philosophical concept of “do”: the search to perfect the self through developing the will and wisdom. In this sense there is a correlation between Taekwondo with the universe and its manifestation through the attire that it wears.

The use of the white uniform with specific sleeves and edges goes back to the ancient Korean warriors. During Silla’s dynasty, which unified Paetche and Koyuryo kingdoms, we can find evidence of the use of doboks. There are some painting found in archeological digs that detail wearing clothes that consist of white pants and a white top, both tied by a silk black belt around the waist. Some other authors associate ‘dobok’ with ‘hanbok’ which is a traditional Korean outfit. The hanbok represents the three shapes in which the universe was created, based on oriental philosophical concept. These are, the circle (won), that symbolizes the sky or paradise; the square (bang), that represents earth; and the triangle (kak), representing the human. The unity of the three is known as “han” used in hanbok: the waist is the circle, the legs and arms are the square, and the torso is the triangle.

Some other researchers associate the origins of the dobok with the Samurai’s attire. When a Samurai was practicing he removed his armor and kept his silk white undergarments on. The undergarment represents purity and beauty facing death. Samurais believed in not wearing shoes inside a building, also training with shoes was difficult; another of the traditions that Taekwondo adopted. Similarly, the left flap on the Samurai’s clothing crossed over the right side making it easy for the right hand to reach for a hidden weapon inside the dobok, a common practice with Samurais when weapons were hidden on the dobok and around the waist. Since then, the dobok has been through many changes, but we will only mention the latest.

With the evolution of Taekwondo, the attire has been modified to adapt to new techniques and so it has its own identity. This traditional clothing has been made more attractive by the production of different sport’s brands. The V-neck dobok was created in 1978 by various World Taekwondo Federation (WTF) masters and the Kukkiwon in Seoul, South Korea. The closed V-neck top replaced the open top would often come undone and need to be adjusted. Initially the dobok was only made in one color until 1970 when there were made with two, depending on whether the belt color was white or black.

Similarly, the “Poom” uniform had red and black stripes along the neck and sparring uniforms had only one black stripe. From this point on, the uniform was an element used to differentiate between belt levels, ages, and competitors. Once the rank of Dan (black belt) is reached, the students can wear a white uniform with black neck to symbolize royalty, and in the case of Poom (students under age of 16 who reached the rank of Dan, but are too young) students will have a half-red half-black neck (like their belts). Besides the colors one can see logos like WTF’s, a competitor country’s flag or their school. The dobok condition is a reflection of that who wears it, so keeping it clean is very important.

The dobok has a significant meaning which must be maintain and shown beyond pure aesthetics. It in itself manifest a sense of unity, pride and responsibility for being what accompanies the Taekwondo student on the path of death and suffering, according to the ancient warriors of martial arts. For being the instrument that witnesses the overcoming of self-limitations, the dominance of will, and the acquisition of wisdom through years of practice, the dobok is above all else, the testament of efforts towards triumph and a loyal companion for years of training and preparation.

5 thoughts on “The Dobok: will and wisdom”