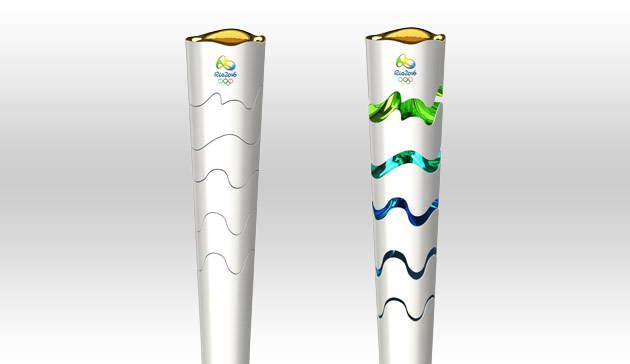 The innovative design, which is inspired by the warmth of the Brazilian people, features moveable segments that expand vertically to reveal the colors of Brazil when the Olympic flame is passed from one torchbearer to another. The triangular shape of the torch, meanwhile, alludes to the three Olympic Values of excellence, friendship and respect, while the floating effect of its different segments represents the efforts of the athletes.

Beth Lula, Rio 2016 Brand Director said: “The design of the Rio 2016 Torch was inspired by the Olympic spirit, our country’s nature, and the harmonious diversity and energy of our people. We used the specific stroke of the Rio 2016 brand to design the torch’s contours. Its horizontal segments, once open, reveal the sky, mountains, sea and the ground, represented by the promenade of Copacabana.”

The chosen design was the result of a nationwide tender that received submissions from 76 agencies. A judging panel, featuring 11 members recognized for their expertise in product design or their contribution to the Olympic Movement, unanimously selected the design of Sao Paulo-based creative studio Chelles & Hayashi.

Each torch – crafted from recycled aluminium and resin with a satin finish – weighs between 1kg and 1.5kg and stands 63.5cm high when contracted and 69cm when expanded.

These will be carried by approximately 12,00 torchbearers during the Rio 2016 Olympic Torch Relay – Presented by Coca-Cola, Nissan, and Bradesco – which will visit around 300 cities and towns across Brazil ahead of next year’s Olympic Games. 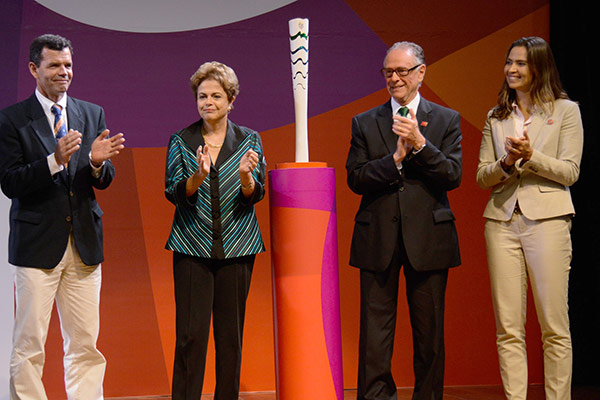