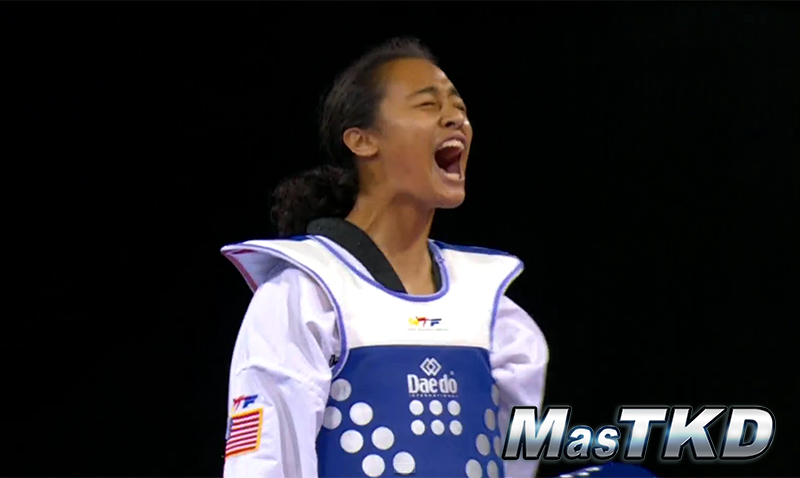 Jason Lewis, also Cheyenne’s coach, took the redeye to Toronto the previous night, and he was the one person Cheyenne wanted to celebrate with after winning her most monumental match yet.

“He’s Mr. Everything,” Cheyenne Lewis said after defeating Mexico’s Paulina Armeria, 11-0. “If I’ve sacrificed a little for this, he’s sacrificed 100 times more. This was just as much his win as mine, and just to share that with him is really special.”

The win was Lewis’ first international, senior-level win, and awarded her 40 points toward Olympic qualification. She took gold at the U.S. Open earlier this year and holds a series of junior-level accolades, but Monday’s win marked a proverbial turning of the page.

“This is my biggest win,” the 18-year-old said. “It’s still kind of surreal. Just the atmosphere was amazing, the crowd was amazing and things just went my way.”

Lewis handedly took down Armeria, her friend away from the mat, in three rounds, earning nine points by attack.

She admits that she didn’t foresee such a dominant win.

“Man, I wasn’t expecting it, especially because today I had some close fights,” said Lewis, who won 8-6 and 8-2 in the quarterfinals and semifinals earlier Monday. “I’ve fought Paulina. That was our fourth time fighting, so it’s always tough when you know someone. But what can I say, just a lucky day. I’m very blessed.”

Lewis began taekwondo as an after-school hobby, a substitute of sorts to her primary sport of track and field, saying “it fell in my lap.” She was a star track athlete in Sacramento, California, and won the city youth championship in the 100-, 200-, 400- and 800-meter events in 2012. But as talented as she was, her appetite was rooted in taekwondo.

“She was good at a lot of things. I just thought she was really great at taekwondo,” Jason Lewis said. “I think taekwondo came easy to her, it came natural. We really had a choice between track and field and taekwondo.”

She gave up competitive track after being recruited by Grand Master Bill DeWart to train in San Francisco.

But Lewis hasn’t fully said goodbye to track. She will enroll at University of California, Berkeley in the coming weeks with aspirations of competing for a spot on the varsity team.

All the while, she plans to continue her upward trend on the mat.

“The ceiling is high so she’s got a long way to go,” her father said.