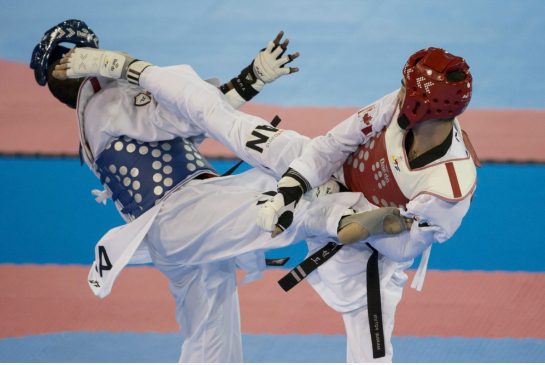 The 27-year-old from Quebec City was outscored 3-0 in an extra round in a 6-3 loss to Mexico’s Saul Gutierrez in the men’s 68-kilogram final. Prior to the match, Potvin had expressed on social media his desire to win the gold medal in support of his family.

“Yeah, I was expecting to get the gold,” Potvin said. “I thought I would be a little bit stronger this fight but he made me tired during the fight because I was always kicking because he has the same range as me.

“It was a little harder for me, usually I don’t fight people my height.”

The bout was tight throughout as the first round ended scoreless while Gutierrez took a 2-1 advantage into the third. So it wasn’t overly surprising the two ended regulation time tied 3-3 at the Hershey Centre.

Potvin certainly had the support of the crowd in the extra round as spectators chanted, “Canada.” But it was Gutierrez who delivered the winning blow, glancing Potvin’s head with his foot, something the Canadian was fully aware of even as his coaches challenged the call.

“We tried the card because we had nothing to lose,” Potvin said. “I knew he had touched me but it depended on the angle of the camera sometimes they can remove the point.

“I tried it but I knew he had touched me. We cannot complain about that, it’s the decision of the referee and it’s final. It can go on my side or the other side.”

Still, Potvin was very appreciative of the support he received from the home crowd.

“It was my first time with a crowd like that,” he said. “To fight in my home country was a pleasure.

“I think that gave me a lot of energy during my fight. Of course, when I was fighting I was concentrating on the fight between rounds I heard the crowd and that was awesome.”

“There was pressure to get a medal,” Potvin said. “But after my second fight I was assured to go to the final and get a medal so the pressure went down after that.

“The final was just enjoy my fight and do my best.”

Earlier, Evelyn Gonda of New Westminster, B.C., dropped a 10-3 decision to Cuban Yamicel Nunez for bronze in the 57-kilogram class. The 18-year-old Canadian took a 2-0 lead into the third and final round and appeared to break a 3-3 tie with 12 seconds remaining in the match by landing a kick to Nunez’s head that would’ve counted for three points.

But a review went against Gonda and Nunez cemented the win by scoring seven points in a wild flurry that ended the bout. While the crowd loudly booed the officials’ decision following their review, Gonda felt the right call was made.

Gonda won her first two matches by 12-point margins before dropping a 10-6 semifinal decision to Paulina Armeria of Mexico. That match also featured a controversial decision that went against Gonda, whose sister, Ivett was a Pan Am Games gold medallist.

“I at least wanted to medal as well,” she said. “But I’m still young and still have plenty of years ahead of me.

Ivett Gonda is a two-time Olympian (Athens 2004, Beijing 2008) and Pan American champion (2011 in Guadalajara, Mexico) for Canada now competing for Hungary. But Evelyn Gonda has certainly established herself in the sport, winning gold at the ’12 and ’14 Pan American championships.