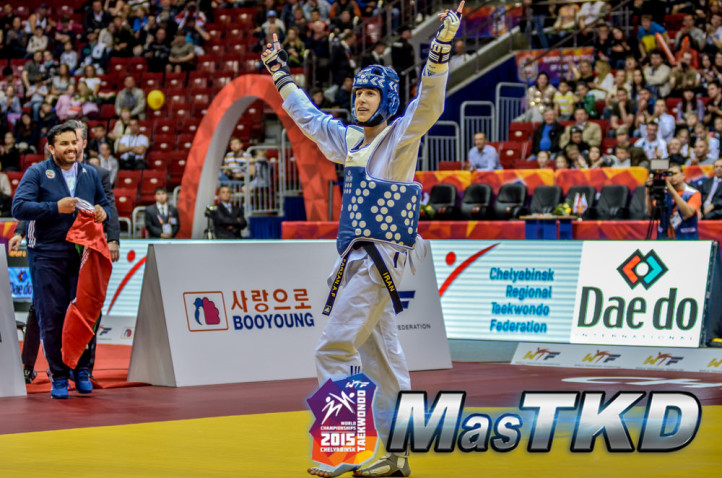 The speed of his improvement was faster than his kicks in the field of play. Farzan Ashourzadeh had an outstanding performance in Chelyabinsk and marked a stormy start for Iran team in 2015 World Championships.

The World Champion Farzan Ashourzadeh tells us his road to the Gold in a “first-person” analysis of all his matches during the 2015 Taekwondo Championships with Iran Taekwondo Federation:

“My first match with Kirgizstan that was concluded 17-3 was a good start and prepared me physically for other competitions.

In the second match, I could beat the representative of Ecuador 14-6, by following the directions of my coach. However, as I felt he became weak in the final round, I did not use all my power.

I had analyzed the representative of Mexico with my coach before the match and as I knew his tactics, I could beat him 9-2.

On the second day of competitions, I had pain in my legs but tried to do my best in my fight with Russia. I was behind my opponent in the final seconds of the 3rd round 11-15 but could tie the match and overcome him in the golden point round. When the match was over, tears of joy rolled on my face.

I had higher expectation from the representative of Belgium; I could beat him 8-3 and grab the gold medal of the World Championships.

Becoming a world champion could make me happy for only a few moments. What made me happier is the title of our team in this event.

Although I am standing in the first place of ranking with a big distance from other athletes, I still cannot be sure I will gain the direct quota of the Olympic Games.

I would like to thank Mr. Moghanlou, Bibak and Yousefi as well as doctor Matourinejad that help me during the competitions and in the camp. I also appreciate the support and contributions of Iranian people, which are heartwarming and give me a great motivation.”