After the gold medal won by the men’s poomsae team on Independence Day, the Philippines bagged two more golds from taekwondo in the Southeast Asian Games on Sunday.

Pauline Louise Lopez and Samuel Thomas Morrison beat separate Vietnamese foes in the final of their respective weight divisions, giving the country its 27th and 28th gold medals in the SEA Games.

Other medalists for the day were Amaya Cojuangco, who settled for silver after a close 138-136 loss to Malaysian archer Fatin Mat Salleh in the women’s individual compound.

The Philippines remains at sixth place in the medal table, while Thailand holds the top spot ahead of host country Singapore, Vietnam, Malaysia, and Indonesia.

Taekwondo exponent Chelsea Sim has won the gold medal in the women’s individual poomsae final – Singapore’s first title at the SEA Games since 1999 when S. Sinnathurai won in the men’s kyorugi flyweight category.

The 19-year-old Sim beat off the likes of 2014 poomsae world champion Rinna Babanto of the Philippines at the Singapore Expo Hall 2 on Friday morning, to better her silver medal effort at the 2013 Games.

Sim totalled an average of 8.00 over her two routines to see off her closest competitors comfortably, with Babanto settling for the silver on 7.480 points and Indonesia’s Habiba Mutiara Mutiara and Kidavone Philavong of Laos were the joint bronze medallists after scoring 7.365 points and 7.350 points respectively.

Kang, 20, won the gold with his final score of 8.135 over two routines making him the clear winner over silver medallist Maulana Haidir from Indonesia, who was awarded 7.635 points. Third place went to Malaysian Yong Jin Kun on 7.305 points, and Sovannat Phal of Cambodia who finished with 7.245 points.

Sim and Kang then teamed up to earn Singapore their third medal on a productive day for taekwondo with a bronze medal effort in the mixed poomsae finals. Vietnamese pair Nguyen Minh Van and Nguyen Minh Tu finished first with 7.885 points, while Malaysia just pipped Singapore to the silver, scoring 7.785 points to the Republic’s showing of 7.720 points. Thailand took joint bronze with Singapore on 7.615 points. 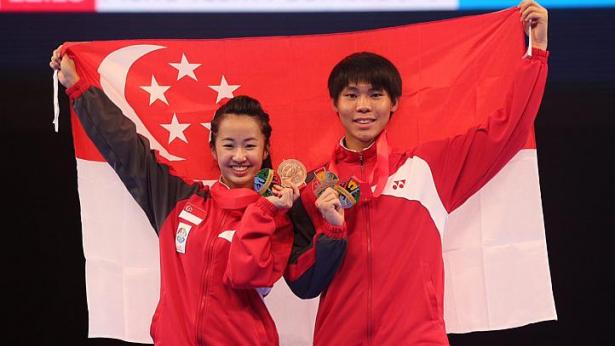 The Philippine taekwondo team successfully defended its crown in the men’s poomsae event on Friday at the Southeast Asian Games.

The squad composed of Rodolfo Reyes Jr. and brothers Jacob and Raphael Mella wowed the judges with precision and teamwork for a top score of 4.55 points in the seven-nation field.

Meanwhile, Rinna Bibanto scored a silver medal in the women’s individual poomsae. She was also part of the women’s poomsae team along with Juven Crisostomo and Jocelyn Ninobla that took home the bronze in that event. —JST, GMA News

Philippines remain in sixth with two-gold haul on Friday

The men’s poomsae team in taekwondo and Christopher Ulboc in the men’s 3,000-meter steeplechase brought glory to the Philippines, which upped its gold medal total to 24. Thailand took the lead in the medal tally, with host Singapore coming in second, followed by Vietnam, Malaysia, and Indonesia.

The poomsae squad composed of Rodolfo Reyes Jr. and brothers Jacob and Raphael Mella wowed the judges with precision and teamwork for a top score of 4.55 points in the seven-nation field.

Meanwhile, Rinna Bibanto scored a silver medal in the women’s individual poomsae. She was also part of the women’s poomsae team along with Juven Crisostomo and Jocelyn Ninobla that took home the bronze in that event.

Christopher Ulboc raced past Vietnam’s Tien San Pham in the final 200 meters to get the fifth gold medal for the athletics squad in the bienniel meet.

The rest of the Filipino entries, however, could do no better than the bronze medal.

Filipino-American Donovan Arriola debuted with a 7.51-meter leap for a podium finish.

Edgar Alejan, meanwhile, copped bronze in the men’s 400-meter run, as did Narcisa Atienza in the women’s heptathlon (2:34.18).

Wakeboarding added a pair of bronze medals to the country’s output courtesy of Mark Howard Griffin and Maiquel John Selga.