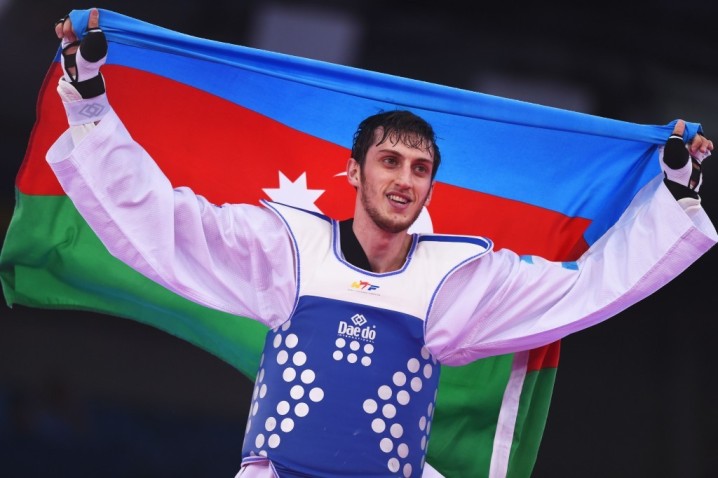 Isaev prevailed 4-3 after three hard-fought rounds amid raucous cheers at the Crystal Hall, falling to his knees to kiss the mat before embracing his coach and embarking on a lap of honour with the Azeri flag draped around him.

At the end of the eighth day of competition, Azerbaijan (13 golds) trail only Russia (27 golds) in the medals table at the inaugural multi-event Games.

“I’ve never competed in such a big competition as this. After this I am going back home to my wife and children and my mother,” said Isaev, who won his first global gold medal in the +87kg category at the world championships in Russia last month.

“But I am going to keep my feet on the ground. Sometimes I am a bit of a joker but today I kept a cool head.”

Born in Makhachkala in the Russian republic of Dagestan, which borders on Azerbaijan, he competed for Russia before switching allegiance at the end of 2011.

On the final day of the taekwondo competition, Frenchwoman Gwladys Epangue, at 31 the oldest competitor in the +67kg weight class, upset Serbia’s Olympic champion Milica Mandic to take gold with a 9-7 victory.

“History is what made me want to win today. It is the first European Games and I wanted to make history,” she said.

“The big names were here and it is great to win against them.”

Epangue dedicated her win to Alexis Vastine, the boxer who was one of three French sports personalities killed in a helicopter crash in Argentina in March.

“I want to dedicate my medal to my family and friends and coach, but also to my special friend who died two months ago. I lost a friend who left us in Argentina.”

Britain’s hopes of adding to the taekwondo golds won in Baku by Jade Jones and teenager Charlie Maddock were thwarted when Bianca Walkden, who became world champion in the +73 category in Russia last month, suffered a surprise quarter-final reverse.

Walkden, girlfriend of Aaron Cook, the British-born fighter now representing Moldova whose own gold medal bid at these games ended in early disappointment, lost on a golden point to Romania’s Maryna Konieva.

Walkden rallied from 9-3 down at the start of the final round against Konieva but having led 13-12 with seconds left, was pegged back.