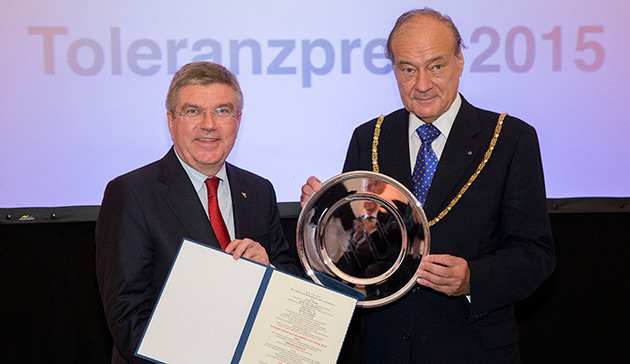 The International Olympic Committee (IOC) has been awarded the Prize of Tolerance 2015 by the European Academy of Sciences and Arts. IOC President Thomas Bach today received the Prize in Vienna (Austria) from the President of the Academy, Professor Felix Unger.

The Academy said that the Prize is in recognition of the IOC’s many accomplishments spreading peace and goodwill since its foundation in 1894. The Academy stressed the inclusiveness of the Olympic Games and the importance of sport for society. It also commended the IOC on Olympic Agenda 2020, the strategic roadmap for the future of the Olympic Movement currently being implemented, for addressing several issues of global importance. It noted that Olympians continue to be leading role models in the fight against inactivity and child obesity.

Commenting on the announcement, the IOC President said: “It is a great honour for the IOC to receive this award from the European Academy of Sciences and Arts. Former recipients include great men, women and institutions, and we are pleased that the role of sport in society is being acknowledged in this way. This Prize means a lot to us as we promote the values of tolerance and peace through sport on a daily basis. Today, more than ever, we need sport to build bridges between people,” he added.

Composed of famous European scientists and artists, the European Academy of Sciences and Arts has been awarding the Prize of Tolerance to personalities and institutions since 1997. Former recipients include the International Federation of Red Cross and Red Crescent Societies (2000); Giandomenico Picco (2005), the personal representative of Secretary-General Kofi Annan for the United Nations Year of Dialogue among Civilisations; former Vice-Chancellor and Foreign Minister of Germany Hans-Dietrich Genscher (2006); conductor Daniel Barenboim (2011); and Prince Hassan of Jordan (2014).