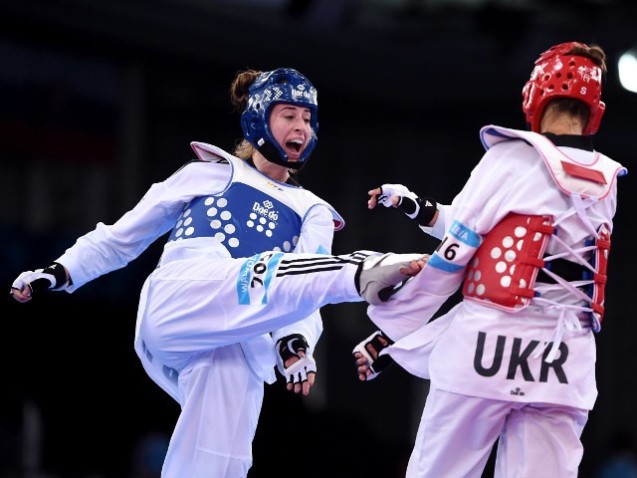 The Brit, who won gold at last month’s World Championships, was the last member of Team GB’s taekwondo squad to perform at the Games, but her 14-13 defeat to Ukraine’s Maryna Konieva in the quarter-finals saw her crash out early in Azerbaijan.

Konieva’s loss in the semi-finals meant that Walkden would not have a second chance via the repechage, leaving her unable to replicate the form of teammates Charlie Maddock, Jade Jones and Lutalo Muhammad, all of whom made the podium earlier this week.

After her exit was confirmed, a disappointed Walkden spoke to Sports Mole about her performances throughout a day that saw her twice come from behind to force golden points.

How are you feeling after that defeat?

“Obviously I’m really disappointed, but I can’t turn back time so I’ve just got to get over it really.”

What do you put your loss in the quarter-final down to?

“I was definitely getting caught too many times. I thought I could cover my body but I just wasn’t and she was scoring really easily. Everything I tried, she got a point from everything I tried to do. I did do well coming back, but I’m devastated.”

You found yourself five points behind in the preliminary bout and seven behind at one stage of the quarters – did those slow starts cost you?

“Yeah, definitely. The first round wasn’t the best but I came back. But I made it hard for myself every time. I did really well to come back, but I just didn’t do enough and I shouldn’t be down that much after one round, it’s silly. I’ve got to go back to the gym and work harder.”

After the high of winning the World Championships last month, does this come as a bit of a shock?

“No it’s not a shock, but I’m disappointed. I’ve got to lose at some point, but I really wanted to win and I knew I should have done better and should have [avoided] silly things like getting caught like [I did]. I really do wish I had the chance of being in that final, but I didn’t do enough to be there today.”

Are there any particular things you feel you need to work on after today’s experience?

“Yeah, there is a lot of work. I need to go back to the gym and work on it because I don’t want this feeling again. It’s horrible.”

Before the tournament began you said that you felt no different since winning the world title, but did you notice your opponents putting a little extra into their performances in order to knock off the world champion?

“A little bit. The Ukrainian girl didn’t do well at all against the Serbian girl [in the semi-final] compared to how she was going with me, but Serbia played a really good game and hopefully I’ll learn from it and next time I can change.”

You’ve had problems with your knee in the past – how did that hold up today?

“The knee’s alright. It’s a bit sore now but I can’t blame it on the knee. I got kicked to the body too many times.”

After the success of Charlie and Jade earlier in the week, was there a bit more pressure on you to go far today?

“Obviously if I didn’t get gold it would have been a bit less than those two, but it’s an individual sport at the end of the day, and they did amazing and fantastic. I just wish I could back it up for us and get three golds.”

I noticed you sat with boyfriend Aaron Cook during that semi-final. How helpful is it to have someone who has been through it all in the sport when trying to get over a disappointment like this?

“We’ve just got to go back and train harder. We don’t like this feeling, it’s the worst feeling in the world. I’m going to train so I never get this feeling again.”

Despite early exits for both you and Mahama Cho today, things are looking bright for GB taekwondo…

“Yeah definitely, we’ve done well. We’ve got two golds and a bronze. In taekwondo anything can happen on the day, so I think we’ve done really well. We did well at the Worlds, we’ve done well here and hopefully we can do well and qualify a lot of people for Rio.”