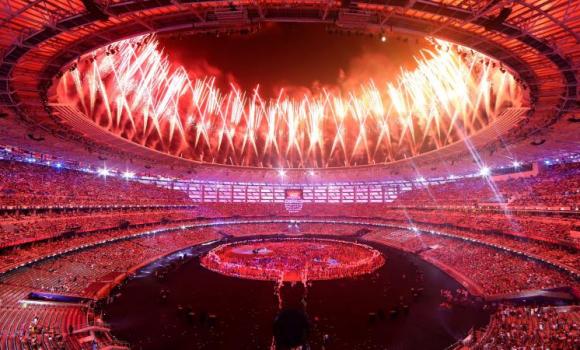 The 17 days of elite sports have shot by from June 12 to 28 in the Azerbaijani capital, to end with an extravagant show watched by the 70,000 spectaculars who gathered into the stadium and millions of people around the world.

The farewell show brought together athletes from all of the 50 competing nations from across Europe.

The closing ceremony was the brainchild of James Hadley, who has over 25 years of experience in professional theatre, circus arts, and directing large-scale events.

The director captured Azerbaijan’s rich tapestry of different colors, peoples, traditions and influences set amidst the blaze of 10,000 pyrotechnics.

The spectacular show honored not only the 6,000 athletes who travelled to Baku to compete in the inaugural European Games, but also the flame keepers, the volunteers, whose energy, enthusiasm, and remarkable dedication have contributed to the success of Baku 2015.

First Lady Mehriban Aliyeva praised all of those who took part in “making the European Games an unforgettable festival of sport.”

“We are proud that the first European Games were held in our country. We are proud that within only two and a half years Azerbaijan has turned its commitment into a reality, and delivered a sporting event of the highest standard. Over the last 17 days we witnessed unity, solidarity, and friendship between European nations,” she stressed.

“As the curtain falls on this celebration of sport and friendship, I’m overwhelmed by an enormous sense of pride in our country and our people. The past 17 days will live forever in our hearts. It will be an unforgettable moment in our history that passes down through the generations,” the first lady added.

She thanked Azerbaijan President Ilham Aliyev and the entire population of the country for the support they gave the Azerbaijan athletes, who finished second in the medal table.

“The entire nation is proud of our athletes. They have won a total of 56 medals – including 21 gold medals – and finished second in the overall medals table. Athletes of Azerbaijan, your success makes you a great example to the next generation,” she added.

She went on to praise the European Olympic Committee, the volunteers from both Azerbaijan and abroad, as well as the Games Organizing Committee.

“Azerbaijan opened its arms and its heart to Europe. We welcomed old friends and made new ones,” Aliyeva said.

“The spark which ignited the European Games has come from the Land of Fire,” Patrick Hickey said during the ceremony.

He expressed gratitude to Azerbaijan and everyone who has shared in preparation for this superb 17-day celebration of sport.

Hickey said that under the leadership of President Ilham Aliyev and First Lady Mehriban Aliyeva, the Baku 2015 European Games Operations Committee delivered arenas fit for the best athletes in Europe.

”A gold-medal standard of operational excellence and a team of new young heroes: your fantastic volunteers. All that in the space of 30 months,” said the president of EOC.

”The sports facilities you have created here will serve your athletes, your communities, and your young people for years to come,” he said.

“Great Games is defined by great sport. Great sport is what you gave us,” he went on.

”I hope these Games stay with you. Your satisfaction in victory; your lessons in defeat. Now that you have lived, trained and competed with Europe’s best, you are ready to face the world at the Rio 2016 Olympic Games,” he said.

Hickey stressed that these inaugural games set the groundwork to build all future European Games and the foundations of an event that will endure and inspire.

The closing ceremony featured both the ancient and modern history of Azerbaijan, mixed with a glimpse into the future.

International music acts led by DJ Gareth Emery, Jon Newman, and Clean Bandit entertained the audiences – both in the stadium and the nearly 10,000 spectators viewing the event on the big screen near the shores of the Caspian Sea in Baku’s famous Bulvar – as the cauldron’s flames slowly faded.

The Baku 2015 European Games has ended, but it entered the pages of history and its future flame, which will also be lit in Ateshgah Temple, will fuel the proceeding games with the energy. 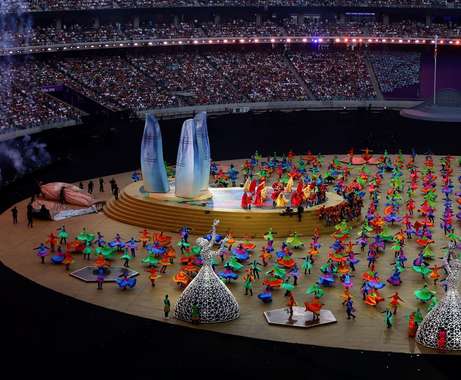