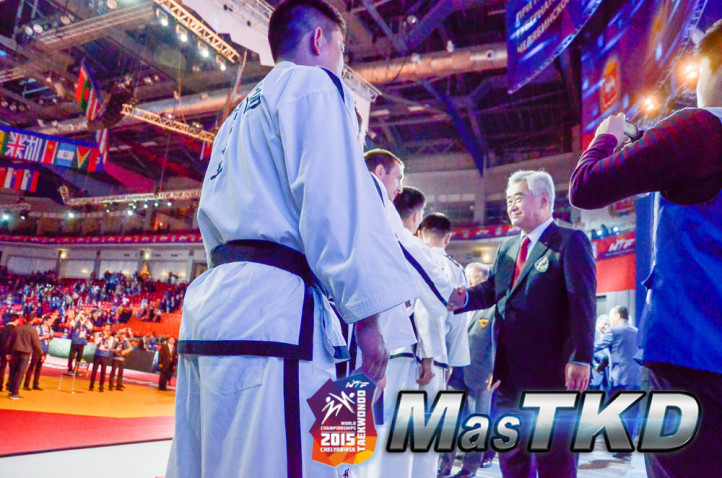 “This is the beginning of a new beginning,” said WTF Secretary General Hoss Rafaty at a press conference in Chelyabinsk’s Traktor Arena. “Whoever is in taekwondo has been waiting for this moment for a long time; we hope this new beginning will open the door for all the family of taekwondo to become one unit.”

Both the ITF and the WTF stem from the same root, but over the years and decades, the styles practiced by the two federations have diverged. Observers point out that the WTF, the exclusive administrator of Olympic taekwondo, puts more emphasis on sportive application and high kicks, while the ITF is more focused on martial arts and has a more inclusive sparring format.

The agreement to carry out a joint demonstration was included in a protocol of accord signed between ITF President Ung Chang and WTF President Chungwon Choue in August 2014 in Nanjing, China. The signing was overseen by International Olympic Committee President Thomas Bach.

Under the protocol, the two bodies also agreed that athletes from both federations could compete in each other’s tournaments, on the understanding that they follow the other federation’s rules and regulations.

The historic significance of the joint demonstration was not lost on attendees at the press conference.

“We consider it the first step of the application of [the protocol] which is to be continued in years to come,” said Kim Seung-hwan, the ITF Secretary General. “During the period of cooperation, both presidents agreed to deepen discussions to eventuate the possibility of getting athletes from both federations to attend Olympic Games and other international games.”

WTF President Choue is promoting “taekwondo is one” as the WTF’s current theme, and likes to quip that “WTF” should stand not for “World Taekwondo Federation” but “World Taekwondo Family.” At the press conference, Rafaty picked up this theme.

“We hope this new beginning will open the door for all the family of taekwondo to become one unit,” he said. “Today we have the ITF side-by-side with the WTF doing a demonstration for the opening ceremony; we are delighted to have our ‘family’ here with us.”

ITF Spokesman George Vitale called May 12, a “truly historic day in the history of taekwondo.” He continued, “There has been so much dissension in the Korean martial arts community … we acknowledge our common roots, we respect each other and pledge cooperation moving forward.”