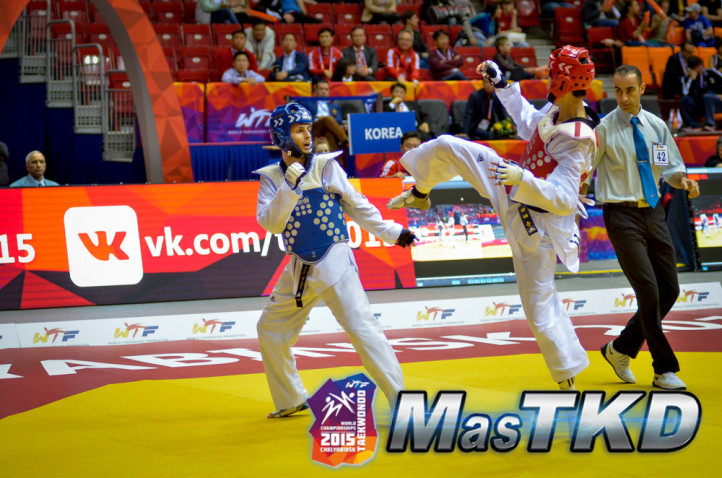 In the men’s -68 kg category, Korea’s Dong-yun Shin and Spain’s Jose Antonio Rosillo Atencia took the bronzes after Turkish taekwondo legend Servet Tazegul beat out Russia’s Alexey Denisenko in an explosive final that the sport’s fans will be discussing for years to come.

During the matches, the near-capacity crowd at the Traktor Arena raised the roof with a storm of thunder sticks. In the break between them, the WTF demonstration team lit up the crowd with a pacey blend of taekwondo, acrobatics and showmanship.

In the finals of the women’s –67kg, Chuang squared off against Tatar of Turkey. Chuang had won a first place at the 2014 World Taekwondo Grand Prix Series in Suzhou, China and a third place at the Incheon Asian Games in Korea in 2014; she is world ranked number eight. The seventh ranked Tatar took third at the 2014 WTF World Taekwondo Grand Prix in Manchester, U.K., and another third place in the 2014 European Senior Championships in Baku, Azerbaijan.

The match started with cautious foot jabbing, but with neither fighter finding the range, the round ended 0-0.  In the second, with the referee demanding action, Chuang finally connected, scoring a single point with a turning kick to the body.  Round 2 ended 1-0. In the third, the action briefly heated up, but despite the flurry of techniques, the scoreboard remained frozen. Only in the last 15 seconds did the Turk engage all-out-attack mode. In a flurry of kicks, she drove her opponent to the edge of the mats – but impaled herself on Chuang’s perfectly-timed spin kick, earning the athlete from Chinese Taipei a convincing 5-0 victory and the world championship.

The men’s final was a different affair entirely. World-ranked number one Alexei Denisenko of Russia, bronze medalist in London 2012 and victor at the Grand Prix Final in Queretaro, Mexico in 2014, took on Turkey’s Servet Tazegul, the gold medalist in London 2012 and the winner in the World Championships in Gyeongju, Korea 2011. The Russian is known for his flamboyant aerial techniques, while the fearless Tazegul is one of the most exciting fighters ever to don a dobok.

Denisenko strode on to the mats to thunderous applause from the audience, followed by Tazegul, who raised his head protector in salute. Both fighters looked tense, perhaps sensing that there was more at stake than simply a world championship:  The crowd was anticipating a classic battle – a Hector versus Achilles, an Ali versus Frazier.

They were not disappointed. At the opening bell, Tazegul leapt into the attack, driving his opponent off the mat with serial jumping spinning kicks, then opening the scoring with a one-point lead. After this initial explosion, things briefly slowed down – then Tazegul unleashed his patented spin back kick, earning three points. Denisenko returned fire, connecting with a head kick from the clinch. Three points flashed up on the board – then were deducted: The hit had been on the break, taking the score back to 4-0 in the Turk’s favor. Both athletes recommenced, kicking with real venom, and Denisenko connected to the head. The scoreboard was on fire: Round 1 ended 5-4 to Tazegul.

Early in Round 2 Denisenko leveled it to 5-5 driving the crowd wild as they watched two perfectly matched fighters unleashing taekwondo’s full arsenal against one another. The Turk fired a spin kick, the Russian shot back with a head kick, the Turk ducked it. In blink-and-you-miss-it action, the board went to 6-6, then 7-7. In Round 3 Tazegul punched and Denisenko responded with a left-right kick barrage. Tazegul’s wicked spinning back kick struck again, taking his score to 10 points. Denisenko tried to drop the ax, but fell. In the dying seconds, the Russian appeared to land a head kick but to no avail: the round ended. The smoke cleared, the score was 10-7 and the world champion was Servet Tazegul.