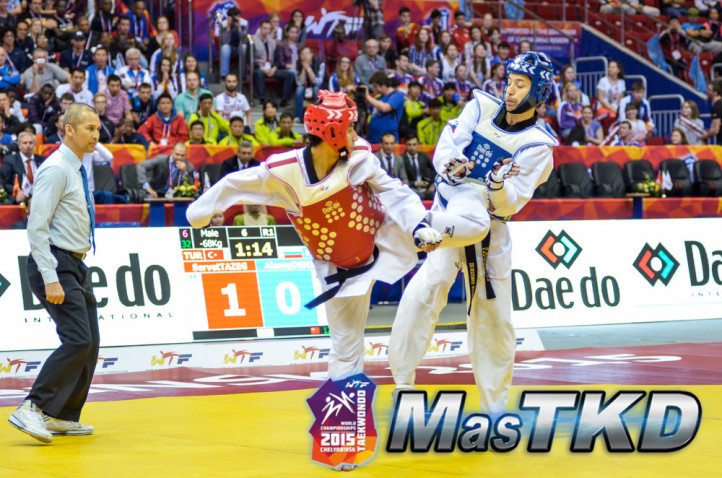 Well, talk is cheap. On the night of May 15, 2015 in Cheylabinsk’s Traktor Arena, the most famed fighter in the sport delivered a bravura performance, electrified the taekwondo community and proved to the world that Servet Tazegul is most definitely back.

In the finals of the 2015 WTF World Taekwondo Championships – a tourney in which conservative, tactical fighters wielding front-leg cut kicks and push kicks dominated – Tazegul delivered a live technical seminar on taekwondo’s most spectacular techniques.

The 26-year-old Turk, who teaches at the Leopard Taekwondo Club in Nuremberg is nicknamed “The Cheetah” and it is easy to see why: He is as fast, as stylish and as fearless as the killer cat. Facing Korea’s Dong-yun Shin in the first semifinal of the men’s -68kg final match, Tazegul stamped his personality on the match from the opening bell.

Most fighters start slow, probing their opponent with jabbing kicks. Not Tazegul. The Turk lit up the scoreboard with three points courtesy of his bespoke jump spinning back kick – fired from impossibly close range – and letting rip with a war cry. Fighting from the clinch, he grabbed another point with a turning kick. The Korean scored, then the Turk unleashed a scorching spinning heel kick to Shin’s head – drawing a cheer from the crowd – that did not register on the protector and scoring system (PSS). Another spinning head kick was unleashed from the edge of the mats. Firing yet another jump spin kick, he was countered by the Korean in mid-flight and visited the mats. After a firefight of kick-kick-kick, the Turk scored to the midsection. By the end of Round 2, it was 9-4 to Tazegul.

Round 3 continued in fast ‘n furious style, with kickathons, clinch work and Shin responding to the challenge, attempting to drop the ax on the shorter Turk. Tazegul raised the points to 13-7, then yet another jump spin back kick – fired yet again from crazy-close range – took the board to 7-16.  With five seconds left, it was 11-16. The fight went right down to the bell, ending 13-16 to The Cheetah. This was the taekwondo that the crowd had come to see; the Turk received an ovation as loud as that accorded to any of the Russian fighters.

The final pitted The Cheetah against an opponent worthy of his skills. World-ranked number one Alexey Denisenko of Russia, bronze medalist in London 2012 and victor at the Grand Prix Final in Queretaro, Mexico in 2014, is another fearless, high-scoring fighter, noted for flamboyant high kicks and aerial attacks.

Denisenko strode on to the battlefield to thunderous applause, followed by Tazegul, who raised his head protector in salute. Both fighters looked tense, perhaps sensing that there was more at stake than simply a world championship:  The crowd was anticipating a classic match – a Hector versus Achilles, an Ali versus Frazier, a clash of titans. 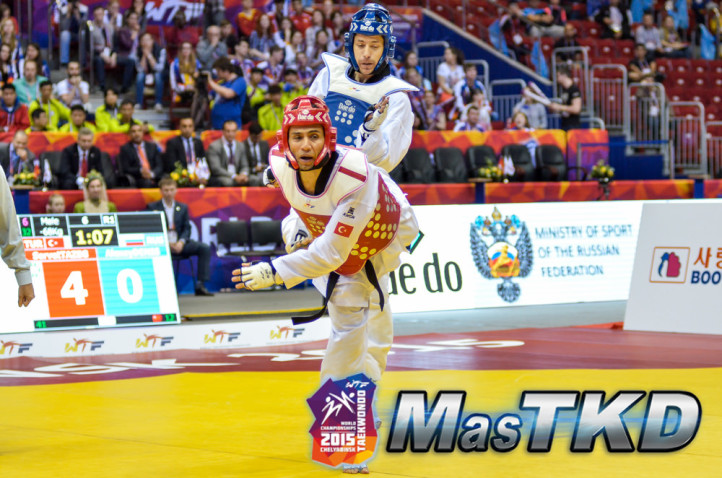 They were not disappointed. At the opening bell, Tazegul leapt into the attack, driving his opponent off the mat with serial jump spinning kicks, then opening the scoring with a one-point lead. After this initial explosion, things slowed down, but only briefly; then Tazegul unleashed his patented spin back kick, earning three points. Denisenko returned fire, connecting with a head kick from the clinch. Three points flashed up on the board – but were deducted: The hit had been on the break, taking the score back to 4-0 in the Turk’s favor. Both athletes recommenced, kicking with killer intent and Denisenko connected to the head. The scoreboard was flashing like a pinball machine: Round 1 ended 5-4 to Tazegul.

Early in Round 2 Denisenko leveled it to 5-5. The crowd was in lunatic mode, as the two perfectly matched fighters unloaded taekwondo’s full arsenal on one another. The Turk fired a spin kick, the Russian shot back with a head kick, the Turk ducked under it. In blink-and-you-miss-it action, the board flashed to 6-6, then 7-7. In Round 3 Tazegul punched and Denisenko responded with a left-right kick barrage. Tazegul’s wicked spinning back kick struck again, taking his score to 10 points. Denisenko tried to drop the ax, but slipped. In the dying seconds, the Russian appeared to land a head kick but to no avail: the round ended; the smoke cleared; and The Cheetah was world champion with a score of 10-7.

It was not just a convincing performance, but a relief, for the Turkish legend has been impacted by a series of events that have cracked his focus, damaged his body and kept him off the mats. Just before the 2012 Olympics, his mother – to whom he was very close – passed away. After winning gold in London, he suffered a series of injuries: Torn foot muscles, knee problems, a broken hand, a broken toe.  More happily, he has also bought a house, got married and has a child on the way.

“There have been a lot of things, I have not been in the arenas,” he said. “But real champions are the ones who go down, then climb up to the top again. That motivates me a lot – I want to show that I am a real champion.”

He had not expected to take gold in Chelyabinsk. “Coming here I was targeting medals, any medals, not the gold,” he said. “I did not know myself how I was going to make it: Each round, the first preliminary, the second preliminary, each fight motivated me more and more, and in the semifinals, I told myself, ‘Don’t think about my opponent – they have to think about me!”

And there was a deeper motivation for the day of the finals was a very personal one for Tazegul. “As soon as I saw the timetable, I knew that was her birthday,” he said. “I wanted to get that medal for my mom.”

Speaking the day after his victory, Tazegul was critical of the current generation. Calling the dominant front-leg, tactical game uninteresting to watch, he said: “The reason I started taekwondo was because of of Jackie Chan movies with spinning kicks. [In the current style] you have to make a strong front leg, but in my style you have to be really strong on both legs, to be in really good conditions. This is real taekwondo – the taekwondo that I love!”

Remarkably Tazegul says his clash against Denisenko was not his optimum game. “It was not really my old form,” he said. “There were many targets I aimed for but could not make. The old Servet would have hit those targets.”

But his kind of high-impact, high-level taekwondo is also high risk: While he scores a lot of points, Tazegul’s offensive style also makes him easier to score against than cagier fighters. “They call me crazy, nobody can guess what I am going to do,” he said. “But  win or lose, I am happy. I see all taekwondo as a big family and if, among this family, someone gets the prize instead of me, that is OK.”

Everybody in Chelyabinsk – athletes, coaches, fans, officials – has been talking about his match; his return to competition is great news for the sport. “We saw tactics and strategy, but we also saw the kind of dynamic action we want in taekwondo competition,” said Mike McKenzie, the WTF’s TV commentator of the Tazegul-Denisenko epic. “This is what makes taekwondo exciting.”

For the next 15 months, Tazegul will be competing in every competition available to earn ranking points for the Olympics. But watch him while you can. After Rio, “The Cheetah” will be retiring from the mats. 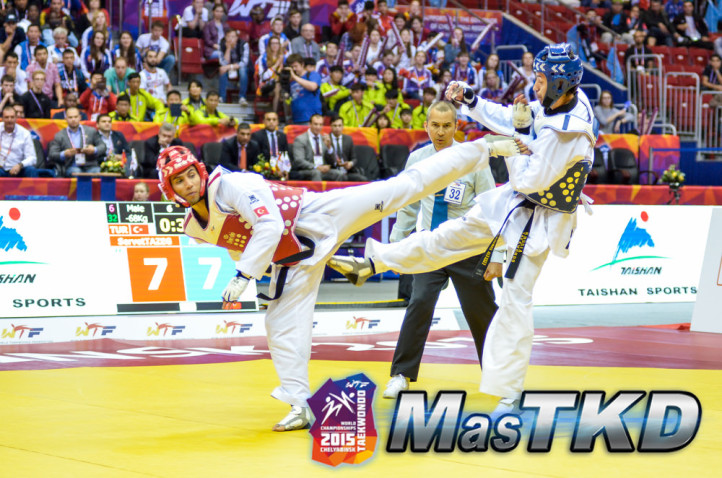