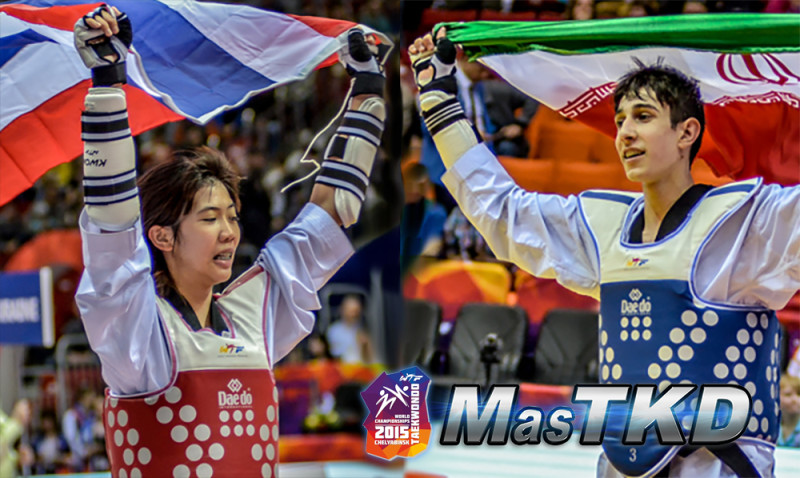 The previous day had seen the opening ceremony and the preliminaries in the female -46kg and the male -58kg categories; today featured the semifinals and finals in those divisions.

Wongpattanakit, the world-ranked number 10, captured the first place both at the 2014 Youth Olympic Games in Nanjing, China and at the 2014 Asian Senior Championships in Tashkent, Uzbekistan. In the finals of the female -46kg division, she faced off against Ukraine’s Iryna Romoldanova , the world-ranked  number eight and the winner of the 2014 Austrian Open in Innsbruck, Austria, and silver medalist at the 2014 European Senior Championships in Baku, Azerbaijan.

The Thai looked, with her bobbed hair and flashing grin, cheerful as she prepared for battle; the Ukrainian looked distinctly nervous.  But it proved to be a see-saw match. Wongpattanakit, with a slight reach advantage, took control of the center of the ring from the opening and pressed Romaldonova, firing off ambidextrous kicks. Her opponent played a cagier game, favoring her front foot. Yet it was Romaldovana who drew first blood – a score that was almost immediately reversed, as the Thai’s coach appealed what looked like two connecting head shots. At the end of Round 1, it was 3-2 to Wongpattanakit. Round 2 saw the Thai fighter leveraging her leg length and ring control. At the end of the round she was up 5-2.  Round 3 started off with more foot fencing, then Romaldonova levelled the score at 5-5, with a jackhammer side kick to the torso. That left the match going to golden point.

The Thai’s coach looked visibly flustered; the Ukrainian looked much more confident as she came onto the field of play for the decider. But for the first minute and a half it was more tactical combat with no points scored, meaning Wongpattanakit, who had maintained a higher work rate, would likely win on superiority (i.e. the number of impacts on the padding). In the last 20 seconds, Romaldonova, realizing this, went for broke, charging her opponent with a barrage of kicks, trying to score or force her off the field. But she had left it too late: Her last kick landed – literally – as the Thai raised her hands in victory.

A delighted Wongpattanakit – who is just 17 years old – ran round the ring, draped in her national flag, before being presented with the gold by WTF President Chungwon Choue.

With Romaldonova winning the silver, Wan-ting Lin of Chinese Taipei and Brazil’s Iris Tang Sing both took home bronzes. And Romaldonova had something to be proud of: She had won her country its first-ever World Taekwondo Championship medal.

The men’s final saw number one ranked Farzan Ashour Zadeh Fallah of Iran take on Belgian Si Mohammed Ketbi, who was fighting under the WTF flag, and is ranked ninth by the federation.

The Iranian, known as “The Tsunami”  is perhaps the most dominant fighter in taekwondo today, having won first places at the 2014 WTF World Taekwondo Grand Prix Final in Queretaro, Mexico, the 2014 WTF World Taekwondo Grand Prix in Manchester, U.K., the 2014 Incheon Asian Games in Korea and the 2014 Asian Taekwondo Championships in Tashkent, Uzbekistan. But to reach the final, he had first faced a battering-ram challenge from Russian Ruslan Poiseev.

The stocky Poiseev, totally unintimidated, amazed and delighted the partisan crowd by taking the fight to the towering Iranian, dominating with close-up techniques including punches, in what was a virtual war in the trenches. But “The Tsunami” kept his composure and showed his quality: He won by scoring in the match’s last two seconds.

Then it was the final. Ketbi has a very similar style to the Iranian: Both these tall, leggy athletes fight tactically, using conservative, long-range techniques, mostly to the body. After his earlier trial-by-fire, the Iranian had recovered his morale and loped onto the mat with a broad grin on his face. “The Tsunami” opened the scoring as the two put on a display of foot fencing; the round ended 3-0 in the Iranian’s favor. Ketbi fought back in Round 2, varying his attack with punches. At the end of the round, it was 5-2 to Ashour Zadeh Fallah.

In Round 3, Farzan controlled the center of the court like the master of physical chess he is: With only 30 seconds left on the clock, it was 7-2 to the Iranian. The Belgian upped his work rate, but was not firing the kind of high-scoring, high-risk techniques he really needed. Though he unleashed a head kick in the final seconds, it was too little, too late. “The Tsunami” flashed a huge grin and pointed at the crowd. Final score: 8-3.

“With all the experience I had before, and with all the practice I had, I expected to win,” said Ashour Zadeh Fallah after receiving his medal from IOC Sports Director Kit McConnell. Asked if there was anyone who could beat “The Tsunami” right now, Iranian national coach Mahdi Bibak responded, “I don’t think so!”

Also today, preliminary competitions took place in the men’s -74 kg category and the women’s -49kg category. The semis and finals in those categories, to take place on May 14, promise some exciting matches.

In the men’s -74 category, Iran’s Masoud Hajizavareh, Russia’s Albert Gaun – possibly the most popular fighter at the championships – Uzbekistan’s Nikita Rafalovich and Mali’s Ismael Coulibaly will be fighting for gold.