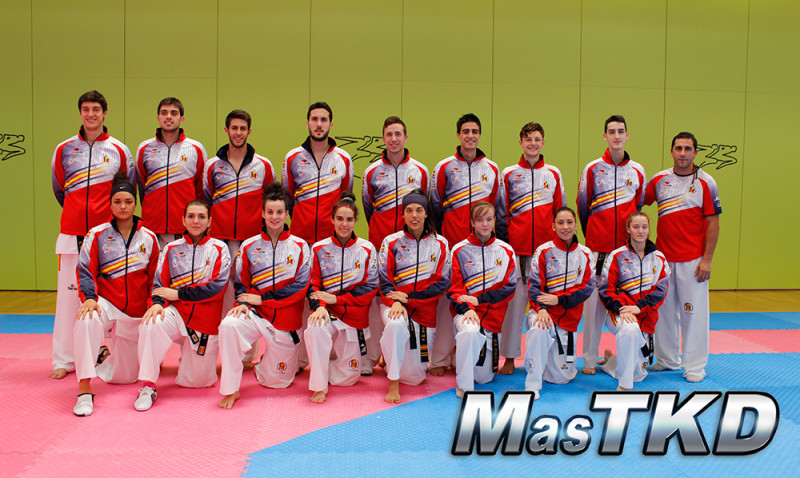 The 16 athletes who will represent Spain in the 21th (14th Women’s) 2015 WTF World Taekwondo Championships to be held from May 12 to 18 in Chelyabinsk, Russia are making their final preparations in the world famous “CAR Barcelona”.

MasTKD.com  talked with the National Coach, Antonio Catalan Toledo  we had the opportunity to see the complete team, including iconic athletes as Joel Gonzalez, Brigitte Yagüe and Rosanna Simon in action.

“The whole team is very motivated.  It is a team with different strengths, we combine experience with athletes holding titles in world championships, Olympic Games and European championships, and we have also new talents with titles in the junior category such as Jesus Tortosa and Daniel Quesada.  They complement each other and the fact of being together makes them stronger” said Antonio Toledo.

The Spaniard coach says the team is very enthusiastic and although the calendar of events has been very busy, their athletes “are not burned out”,   making reference to the words Elena Benitez said a few days ago in a exclusive interview with MasTKD.   (

“We are very happy because our athletes are very enthusiastic, even world champions such as Joel and Brigitte are very excited.  And the new members such as Alex Falgas Fischer or Mariona Leyes Ausio who have been in the team for a short time, have shown their high quality, and of course, they became champions in the last Spain National Championshps” continued Toledo.

“Having Brigitte Joel and your team is like having Lionel Messi and Cristiano Ronaldo together, they are such a inspiration …”  concluded Toledo.