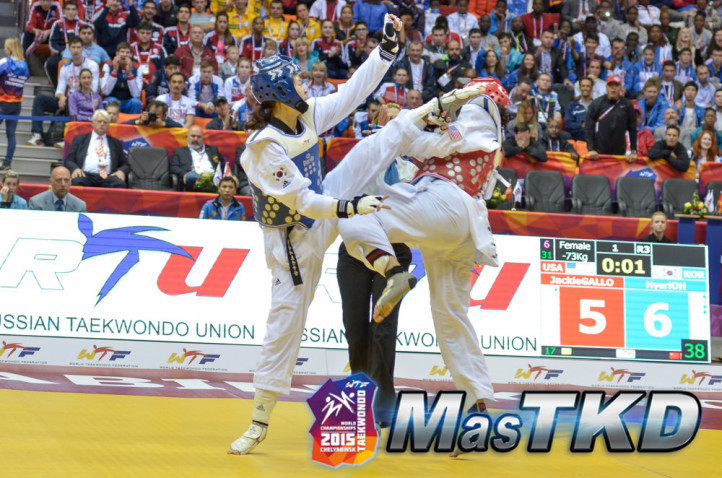 In the male -87kg division, Radik Isaev of Azerbaijan won gold while Jasur Baykuziyev of Uzbekistan took silver; bronzes went to Vladislav Larin of Russia and Rafael Castillo of Cuba. The third place must have been particularly disappointing for Castillo, who had dominated his entire semifinal against Isaev – only to lose in the last second to the Azerbaijani’s jumping crescent kick.

The world’s premier taekwondo athletes delivered another night of spectacular sport in the pulsating Traktor Arena. Rock music pounded and the vocal crowd sounded horns and clashed thunder sticks. In the break, a local band played a taekwondo pop rap, while the crowd flowed around the stadium in a series of Mexican waves.

In the female -73kg, Oh and Zheng got straight down to business. In a flurry of flying feet, the score went 1-1, then 2-2. After a brief pause in the action, Oh landed a side kick, but this, too, was soon equalized, leaving the scoreboard at 3-3. In the second, Zheng pressed forward, putting Oh on the back leg, but the Korean was not intimidated and raised the score to 4-3. The round ended with some scrappy work as both girls closed from kicks to clinches.

In the last round, Zheng went in pursuit of Oh, but could not connect. More clinchwork followed, then in the last 35 seconds, Zheng levelled it to 4-4. The Korean, who had been leading consistently, returned fire almost immediately. When the bell went, Oh’s coach leapt into the air with delight at a very convincing 5-4 victory.

In the male -87kg division, Baykuziyev took on Isaev. Things started slowly, with both men probing at long range, though Isaev was dominating center ring. The round ended 0-0. In the second, Isaev landed a body kick, taking the round 1-0.

Round 3 was action-packed. Isaev stabbed away with his side kick; Baykuziyev tried to close the gap with punches. Isaev struck with a turning kick to the body after his ringcraft put his opponent on the edge of the mat, then added another point, making it 3-0. The Uzbek landed a crescent kick to the face that did not score; he immediately signaled his coach, who flashed his red card. The replay showed that he appeared to be holding while kicking. Result: no score. Then Baykuziyev fell, axed with a heel kick to the back of the head. There was a brief pause while medics came on. He was soon up again, having been awarded a penalty point, but Isaev took his score back up, 5-1.

With 30 seconds left, Baykuziyev went into full attack mode, lifting the score to 5-3, and forcing his larger opponent of the mat with a flurry of techniques. With seven seconds on the clock, he was head-hunting, pressuring the back-pedaling Isaev. Two seconds out, the Uzbek had raised the score to 5-4, but had left it too late to equalize. Having held off the last-minute offensive, a delighted Isaev hurled his head gear to the mat and grabbed his coach in a bear hug.

In the men’s +87kg division, Zokou – one of the most crowd-pleasing fighters in taekwondo – squared off against Shokin. Round 1 started with foot fencing and probing, then, in a flurry of shots, the scoreboard rang up 3-2 to the Uzbek. Round 2 was a rough affair. Zokou held firm, not retreating an inch. In an intense, close-in exchange, Shokin took a punch in the mouth; after being examined by medics, he was awarded a penalty point. Action restarted and he scored with his own fist, taking the board to 5-2. Both athletes were now fighting with wicked intensity. Zokou clawed back the score to 3-2, then, in a flurry, the board shot up to 6-6. Suddenly, it was 6-9 as Zokou connected with a side kick-jump spinning back kick  – perhaps the most spectacular combo yet seen in the finals. An appeal by Shokin was denied, leaving the Cote d’Ivorian in the lead.

Round 3 started with fireworks. The Uzbek fired side kicks and ax kicks, even landing a jump side kick, but not scoring. With a body kick, Zokou went up, 10-6. Shokin fought back with kick-punch combos, winning a point, then another, making it 9-10. In the last ten seconds, another punch took the scores to 10-10, but the board readjusted to 9-10. With five seconds remaining, the Uzbek coach appealed what appeared to be a point deduction for grabbing. It was successful. The board returned to 10-10. Neither man scored, taking the fight to sudden death.

The two shook hands before the final showdown. Zokou attacked with an overhand punch – but from underneath, Shokin buried a side kick in the African’s chest guard, winning golden point and gold medal. The Uzbek grabbed his coach in a bear hug, while Zokou hurled away his head gear and sank to the mat, devastated. He was consoled by Shokin, but the entertaining Cote d”Ivorian supporters looked equally downbeat.

Also, the men’s –80kg and the women’s -63kg divisions will be fought from preliminaries to finals. 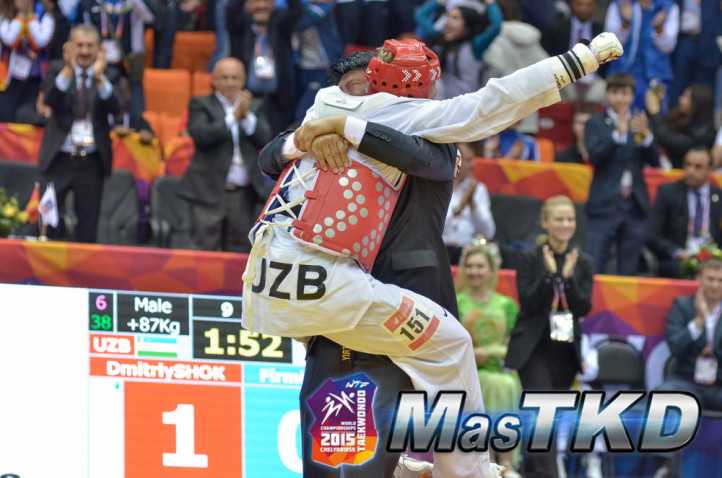