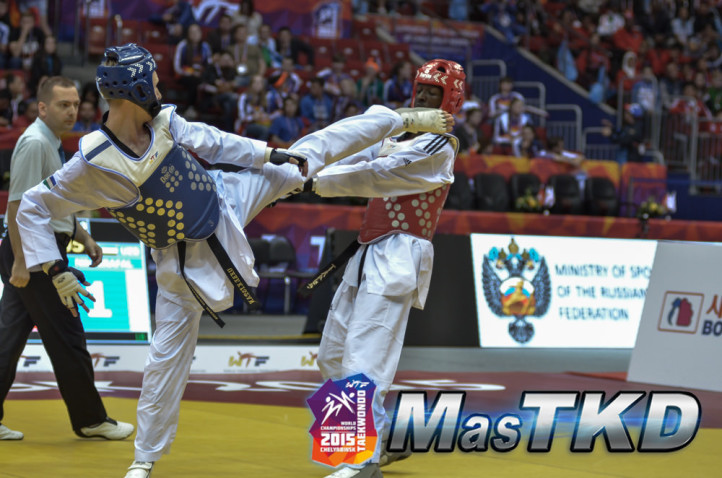 The crowd was in an exuberant mood as the finals got underway: Pop music pounded between the rounds, and Mexican waves rolled around the near-capacity Traktor Arena.

The final of the female -49kg delivered an astounding upset as the world-ranked 96 took a double Olympic gold medalist to the golden-point round – and beat her in it.

Korea’s Ha, 96th ranked by the WTF, faced 17th ranked Wu. While Ha had won the 2012 WTF World Junior Taekwondo Championships in Sharm El-Sheikh, Egypt, Wu is a double Olympic gold medalist from London 2012 and Beijing 2008. Wu was returning to taekwondo after a layoff, but her earlier fights in Chelyabinsk proved that her form remains razor-sharp.

Ha looked composed, Wu determined as they entered the battleground. Both share similar attributes: excellent timing, distancing, flexibility and tactics. Ha drew first blood almost immediately with a body kick; Wu returned fire, evening the score to 1-1. In Round 2, Wu’s lightning right leg gave her a two-point lead as the Korean’s pace slowed – then Wu backpedalled around the edge of the mat as Ha got her second wind. In Round 3, with 18 seconds left on the clock, Ha’s coach appealed a head kick – unsuccessfully. The tension mounted. Ha pulled back a point to 2-3, then – in the last second! – evened the fight to 3-3. In golden point, Wu looked more aggressive, but it was Ha who caught the Chinese player in the midsection – becoming, against all odds, world champion.

“I did the best I could do to take on the Olympic champion,” Ha said after the match.

Iran’s Hajizavareh, the world-ranked number eight, took on world third-ranked Rafalovich in the men’s final. The Iranian had won gold at the 2014 Incheon Asian Games, and third place at the 2014 WTF World Taekwondo Grand Prix in Manchester, U.K.; the Uzbek had taken silver in Incheon and gold at the 2014 Australian Open. 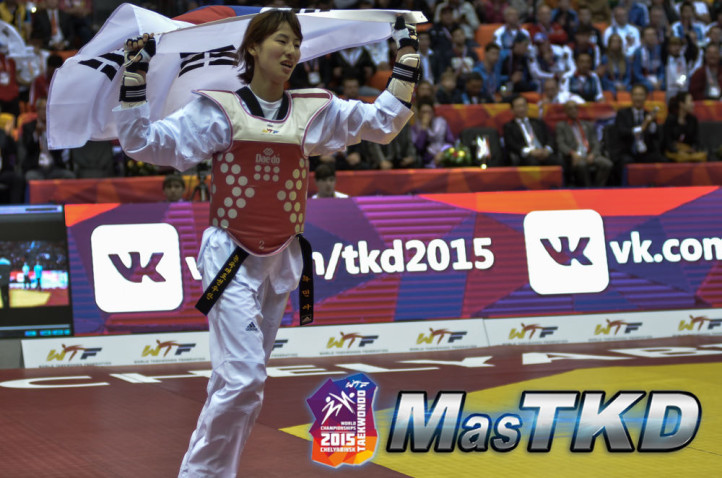 From the start, neither man gave an inch, dueling in center court. Hajizavareh caught the Uzbek by surprise with a high kick, winning three points, following up with a punch, for a 4-0 lead. Trusting to his reflexes and distancing, Hajizavareh dropped down into low, open stances, taunting his opponent. Rafalovich was game, but the Iranian’s accuracy proved superior: another out-of-the-blue ax kick rattled the Uzbek. Round two ended 2-8. In the final round, Rafalovich finally found his distance, clawing back the score to 4-8, before the match degenerated into a scrappy affair of clinching – during which the Iranian stole another point with a rabbit kick. As the seconds counted down, the Uzbek went all out, but Hajizavareh kept his cool and took the title 9-7.

At the medal ceremony, Hajizavareh leapt onto the winner’s podium, flashing a wide grin. “I found it a difficult match and the last seconds were stressful,” he admitted. “But because I had studied my opponent, I could manage it.” 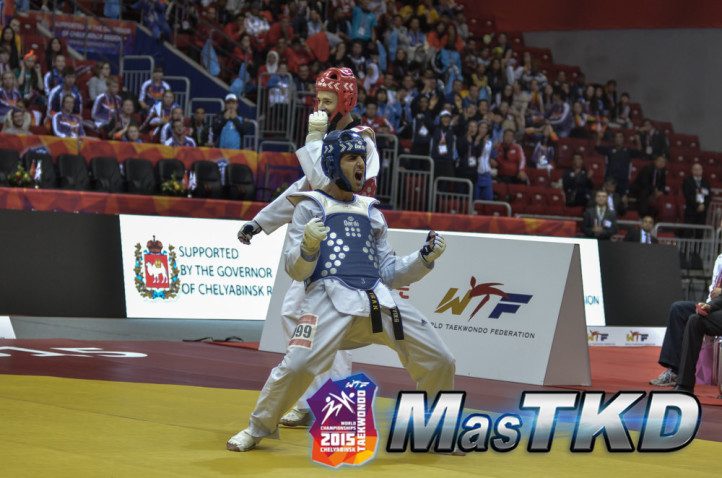 After today’s preliminaries, the finals of two of the most competitive categories take place tomorrow.