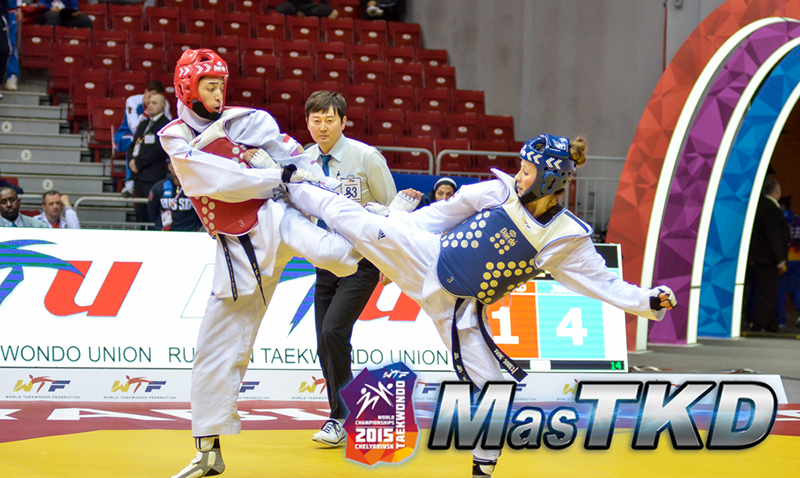 The British Olympian Jade Jones has criticised a computer glitch that appeared to cost her a medal at the World Taekwondo Championships.

Jones, a London 2012 gold medal-winner, was level with her Iranian opponent, Kimia Zernoorin, when the scoring system froze, during the quarter-final in Russia.

Jones had dropped only two points in her road to the last eight, and was leading 4-1 against the 16-year-old Iranian, who fought back to 4-4.

In the final moments, the pair were level at 9-9 in the -57kg contest, with Jones striking a crucial blow to the chest of Zenorin. But the Iranian landed a counter-blow, and when the scoring system came back online, only she had been awarded a point for the manoeuvre, not Jones.

The 22-year-old Brit, unbeaten in her previous six tournaments, lost her match 10-9 and said she was distraught. “The scoring system crashed and when it returned, I didn’t have the points. I couldn’t understand why. I still can’t,” Jones said in a statement on the GB Taekwondo website.

“It was a really tight match but I thought I had it when I scored the spinning back kick. She’s a tough opponent and fought well. I know I could have perhaps covered better but it’s so frustrating to see good shots not awarded points when there is so much at stake.”

“The stakes were high enough here, as it is, and obviously we need to assess what happened before they get any higher.”

Jones was hoping to take the title in Russia, which would have meant she automatically qualified for the Rio Olympics of 2016. Her housemate, Liverpudlian Bianca Walkden, took the gold medal in the +73kg category.

“Jade was very unlucky, and the system may have overloaded just as she struck,” Steve Flynn, operations director of GB Taekwondo, said. “It’s hard to know, but obviously we’re frustrated. We’re not able to appeal, because there’s no immediate record of what happened and it would involve trawling through huge amounts of data to try and recover any evidence.”

Jones is still well placed to qualify for Rio, with the European Games in Baku her next big challenge, Flynn said.

The technology was introduced on the back of another controversial decision involving a British taekwondo star, when Sarah Stevenson was eliminated from the 2008 Olympics in Beijing, despite landing a two-point head kick that should have secured her a spot in the semi-finals. Stevenson was eventually reinstated after an appeal.

The contests were previously determined by a panel of judges but the World Taekwondo Federation has since introduced sensors fitted inside the contenders’ body armour.

“The technology is improving and it’s getting more and more reliable but obviously now we want to make sure that officials learn from this, and work out how it happened,” Flynn said. “The stakes were high enough here, as it is, and obviously we need to assess what happened before they get any higher.”

3 thoughts on “Jones loses out after computer glitch”