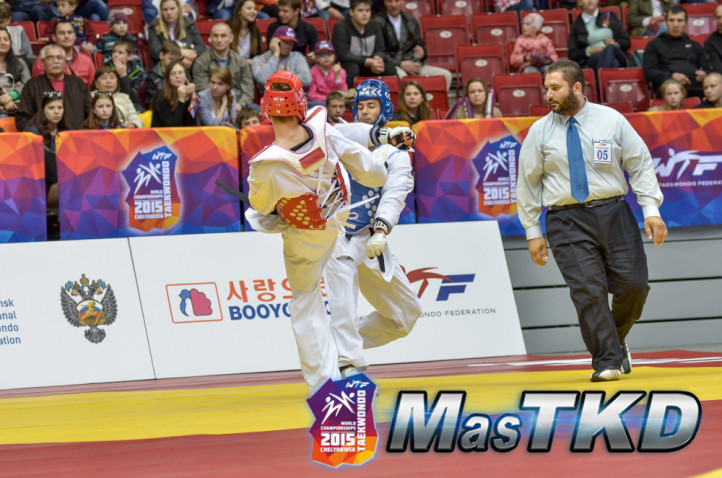 The biennial championships, which took place at the jam-packed 7,500-seat Traktor Arena, drew a total of 873 athletes from 139 countries on the registration basis.

The championships, which featured demonstrations by the WTF and the International Taekwondo Federation (ITF) during the opening ceremony on May 12, drew special attention from both the international media and the home fans. All the tickets for the opening ceremony and competition matches were sold out, showing the high popularity of taekwondo in Russia.

The championships were broadcast in both live and delayed formats in more than 100 countries.

Great Britain’s Bianka Walkden was selected as the female most valuable player (MVP) of the championships, while Turkey’s Servet Tazegul was chosen as the male MVP.

On the seventh and final day of the championships on May 18, four final matches were featured, in which Japan, Turkey, Iran and Belgium – albeit with a fighter competing under the WTF flag – took one gold medal each.

The female -62kg final had featured Yaman against Calvo Gomez of Spain. Both girls kicked off with stabbing side kicks, then varied their attacks with head kicks but it was the Spaniard who scored first with a turning kick from long range, ending Round 1, 1-0. Early in Round 2, the Turkish athlete found the range and took the score to 3-1; both girls then closed and fought, with the round ending 2-4 to Yaman. In Round 3, the Spaniard sneaked a hook kick to the mid-section, then the Turk fired back with a series of machine-gun turning kicks to head taking the board to 4-7, then 4-8. With the seconds ticking away, Carlo Gomez was forced to attack, which was dangerous: Yaman had looked more dangerous on the counter. Carlo Gomez fought forward and paid the price: The Turk landed on the high line, winning gold with a convincing 14-4 win.

The female -57kg division pitted Hamada against Calvo Gomez. At the start, Carlo Gomez looked livelier, circling her bigger opponent, flicking out her front leg like a snake’s tongue. But it was Hamada who got the first hit, a turning kick to the body, and ending Round 1 at 1-0. The second round got off at a quick pace with front leg action from both girls and Hamada raising the score to 2-0 before Calvo Gomez connected, making it, 2-1. Then Hamada kicked on the mid-line and, without dropping her foot, doubled up high, catching the unsuspecting Spaniard on the head guard with a turning kick. Round 2 ended 5-1 to Hamada. Seeking a high-scoring technique, Carlo Gomez let rip in Round 3 with a series of spin heel head kicks, but failed to connect. In the last 30 seconds, she pressured the Japanese fighter to the edge of the mats and raised the board to 3-5, but it was too little, too late: The match ended with Hamada victorious.

The men’s -63kg final, set Achab against Bonilla. The Belgian boy has some of the best footwork on the mats, and from the start, he looked fast, stylish and dangerous – despite suffering a bruising semifinal match against Iranian Abolfazi Yaghoubi Jouybar. Even so, Round 1 ended without scoreless. In the second, Achab registered on the board with a punch, taking Round 2 1-0. Round 3 had more fireworks, In a flurry  both men were connecting, but it was Achab who scored with a crescent kick to the head, taking the board to 5-1. Bonilla managed to up the score with a turning kick fired on the retreat, 5-2. Soon after, the Spanish coach called for a video replay for a head kick, but the screen clearly showed that Achab had blocked: The request was denied. In the last 30 seconds, the fight got really busy, with both men flying across the mats, locked in combat. Bonilla took the scoreboard to 3-7, then 4-7, then 5-7; the Belgian was briefly floored and in the last few seconds, looked like he was playing for time. But he hung on and the fight ended 6-7, giving Achab the gold.

In the men’s -80kg final, Sansum took to the mats against Khodabakhshi. The Iranian is one of the most economical fighters in the sport; with his near-perfect distancing and timing, he makes it look easy. In Round 1 the Iranian scored a point almost immediately, then another, before chopping a kick almost nonchalantly onto the Briton’s head. He continued racking up the points, before Sansum came back with a cut kick. The round ended 7-1. Picking off points like a sniper, the Iranian relentlessly raised his score, point by point, in Round 2, until Sansum managed to maneuver him to the edge of the area and connect, raising his points to 3 against Khodabakhshi’s 13. In Round 3, Khodabakhshi decided to finish. He attacked immediately, scoring with a head kick and taking the match 16-3, on point gap. It was a supreme performance by a master of his art and a well-deserved gold.

There had been an interesting confrontation in the semis of the -80kg category. Aaron Cook, a Briton by birth, was not selected for the British Olympic Team in 2012, so defected, first fighting for the Isle of Man, and now Moldova. He was eliminated in the semifinal in golden point by GB’s Damon Sansum after a high-scoring, 13-13 match. 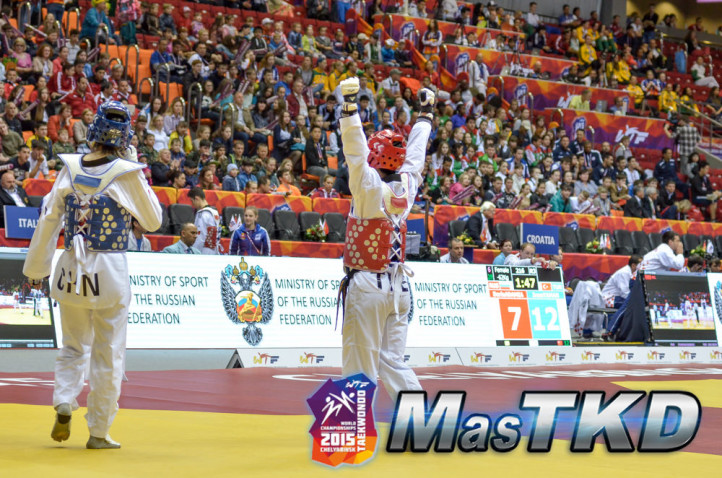