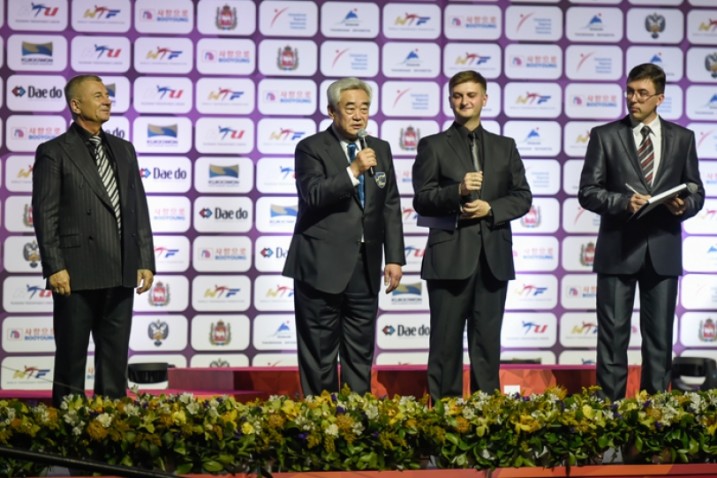 The host city is the capital of South Urals province, and immediately after the finals had finished and medals been awarded, scores of spinning dancers in colorful traditional costumes flooded the floor, whirling around a May pole to folk music.

The crowd was then addressed by WTF President Chungwon Choue. “We really had a wonderful time in Chelyabinsk because of you,” said Choue. “We will never forget what we had here in the championships – and of course, we will be back.”

He thanked all athletes, referees, volunteers and the organizing committee as well as the host city’s citizens. He praised non-winning athletes for losing gracefully and assured them that they would have opportunities in future events, then waved the WTF banner to the backing of Vangelis’ “Chariots of Fire.”

Choue’s speech was followed by costumed school children jogging onto the arena floor and performing a mass dance to the pop-rap theme song of the championships.

Choue then presented awards to the tournament’s best five referees and the MVPs – Turkey’s Servet Tazegul for the males and Great Britain’s Bianca Walkden for the females. The Active Participation award went to Swaziland, the Fighting Spirit award to Iraq. The top five teams were also honored. The women’s teams were: Korea, Chinese Taipei, Turkey, China and Great Britain; the men’s top five teams were: Iran, Russia, Uzbekistan, Korea and Spain.

Earlier in the day, Choue, speaking to media, had called Chelyabinsk 2015 the most successful taekwondo championships ever. “Chelyabinsk has created a new standard for taekwondo events.” WTF Secretary General Hoss Rafaty added, “We learned a lot.”

“I am very sad that it is time to go, May 7 was just like yesterday when it started,” said Leonid Oder, Minister of Physical Culture and Sports for the Chelyabinsk region. “Information about this event will fly far away, around Russia and beyond.”

WTF Director General Yang Jin-bang noted that given that this was the biggest event in the run-up to Rio 2016, an ad-hoc committee would be formed to study its lessons. In a brainstorming meeting held during the tourney, coaches and MNA representatives had debated issues and controversies related to rules and gear.

While the Russian organizers were praised, the Russian athletes might be somewhat unsatisfied with the results of the tourney. Head Coach Vadim Ivanov called the event “the most successful world championships ever” for the country, given that seven Russians made the semifinals and three made the finals – but none had struck gold.

“Of course we had hoped for gold,” said Russian Taekwondo Union President Anatoly Terekhov. “But I think we will get gold in Rio at the Olympics.”