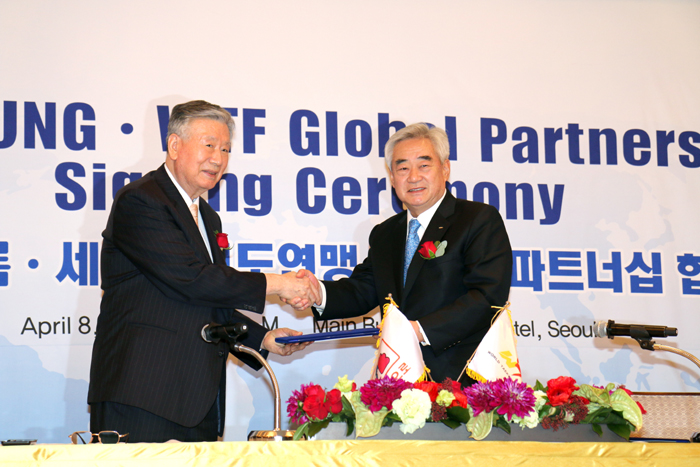 The World Taekwondo Federation (WTF) today announced that it has signed a global partnership with leading Korean construction company – the Booyoung Group – as part of the federation’s ongoing commitment to attracting investment in the sport and ensuring it continues to develop and evolve worldwide.

Under the agreement, the Booyoung Group will provide the WTF with a record investment of USD 10 million over the next six years in the run-up to the Tokyo 2020 Olympic and Paralympic Games. Tokyo 2020 will be the sixth consecutive Olympic Games that taekwondo has been a part of and the WTF has pledged to use the investment to find innovative ways to make the competition more exciting and consolidate its position on the Olympic Program.

The WTF will also use the investment to expand its para-taekwondo structure among its 206 member associations worldwide. Para-taekwondo has witnessed a steady increase in global participation since it was announced as one of the 22 core sports on the Tokyo 2020 Paralympic Games Sports Program by the International Paralympic Committee (IPC) earlier this year. Under WTF President Chungwon Choue’s visionary leadership, the WTF has worked tirelessly over the last decade to become a truly universal and accessible sport and gaining entry into the Paralympic Games was identified as a key objective in achieving this goal.

“We are delighted to have entered into this historic partnership with the Booyoung Group. The WTF has had a very successful few years having consolidated taekwondo’s position on the Tokyo 2020 Olympic Games Sports Programme and having been included in the Tokyo 2020 Paralympic Games. However, there is no room for complacency.  We want to continue to evolve and innovate to make our sport better for our athletes and for our fans.

“Investment through partnerships, sponsorships and broadcasting deals is vital to our future development and we are confident in the coming months and years more companies will look to join the Booyoung Group in becoming WTF global partners.”

Booyoung Group Chairman Lee Joong-keun, has been a close friend and highly valued supporter of taekwondo for many years. He has been involved in various taekwondo development programs aimed at promoting the Olympic values and has actively donated to the creation of taekwondo training centers throughout Southeast Asia.

“For the World Taekwondo Federation, 2015 is a very meaningful year.

On January 31, taekwondo was voted to be included in the official program of the 2020 Tokyo Paralympic Games for the first time.

Since taekwondo debuted as an Olympic sport at the 2000 Sydney Games, taekwondo was included in the official programs of the 2004 Athens, 2008 Beijing and 2012 London Olympic Games. Taekwondo has also secured its Olympic core sport position at the 2016 Rio Olympic Games and the 2020 Tokyo Olympic Games.

And today is a historic day for the WTF as we sign a global partnership agreement with the Booyoung Group. Under the pact, Booyoung is to provide the WTF with a record U.S.10 million over the next six years until the 2020 Tokyo Olympic Games,

As he mentioned in his remarks, the Booyoung Group, under the leadership of Lee Joong-keun and his special love for taekwondo, has actively involved in various supporting programs for Southeast Asian countries, such as Laos, Cambodia, Myanmar by donating training centers for national taekwondo athletes after construction, and providing those countries with financial supports for taekwondo development.

Together with the global taekwondo family, the WTF is pleased with this global partnership agreement.

With Booyoung’s global partnership, taekwondo’s status as an Olympic sport will be further consolidated.

I think this partnership agreement has been made possible with the support, of participants in this ceremony, especially Vice Sport Minister Kim Chong. I expect more Korean and foreign companies will join the WTF as global partners.

Since I took the helm of the WTF in June 2004, I have put almost all my energies in establishing taekwondo as a transparent and fair Olympic sport and the WTF as an exemplary International Sport Federation to a great success.

Now the WTF is going all out to launch the Sport Peace Corps, which involves all Olympic sports, including taekwondo. In this regard, I am asking for the support and participation of the United Nations and the IOC. A concrete action plan is likely to be produced shortly.

With taekwondo becoming a Paralympic sport, the WTF has inevitably to expand its para-taekwondo structure.

At a time when the WTF is in need of financial resources to achieve those colossal tasks smoothly, Booyoung’s global partnership with the WTF today is of much help to the WTF.

Once again, I would like to extend my heart-felt appreciation to Booyoung Group Chairman Lee Joong-keun for his special love for taekwondo. I wish the Booyoung Group a further velopment and prosperity.