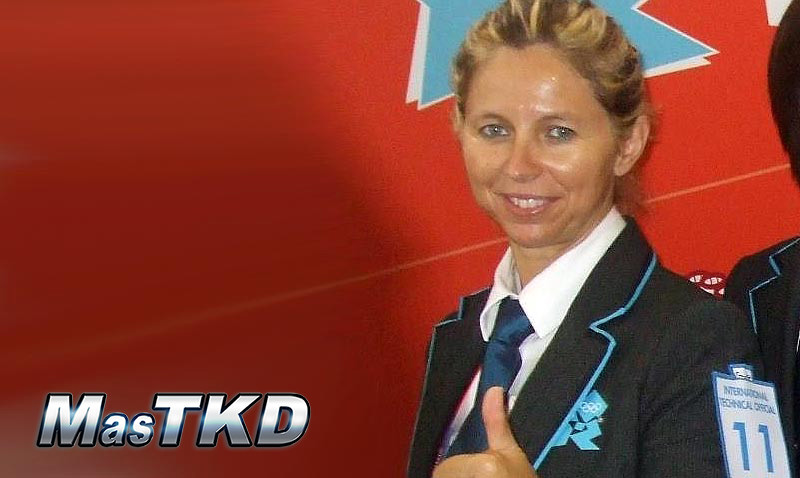 Carmen Navarro is 6th dan, black belt, medalist of Spain in various Kyorugi competitions and European medalist in Poomsae. She obtained certification credits as International Referee in 1999 and has been honored as “Best Referee” in a several world-class events.  During 22 years, she has been Director of the Murcia Referees Committee and was Referee at the Olympic Games  in Beijing 2008 and London 2012.

Here our conversation with her:

After your outstanding career as an athlete  of Kyorugi and Poomsae, how did you come up with the idea of becoming an international referee?

In a country like Spain, with high level and intense internal competitiveness, how come the invitations to referee in international events arrive?

To tell you the truth, I do not know. The  Referee Director in Spain and the WTF itself have sent me the invitations for the last years and that is how I have had the opportunity to be international referee in the senior world championships from 2003 to 2011.

Let’s see … discords no, but I think some may wonder “Why this or that referee is called more often than me?”  And why they do that, I myself don’t know.  I’ve never had problems with anyone.  I just do my job the best I can and that´s it.   During these past years, any referee has told me anything about it.

According to your experience, do you agree that many referees compete to get the “Best Referee” award in an event?

I understand the question, but it is not my case. I don´t compete with anyone. I just like doing things well and improve myself every time I go to an event as a Referee. Humility and fellowship are essential.

While taekwondo referees, in general, are very well trained and educated, this fact does not free them from the human condition and all of them can involuntarily make mistakes.   How should referees handle this situation? And as it happens in soccer,  if their work is criticized by the media, what should be their reaction?

Obviously we are humans and we make mistakes, but that is why referees must humbly acknowledge their mistakes, accept them and accept criticism if any. I am convinced that many of the mistakes are not due to lack of capacity or resources, but they are involuntary.

You worked together with Chakir Chelbat in the 2008 Beijing Olympics.  Have you noticed changes since he took over as Director of the WTF Referee Commission?

I worked with Chakir at the Beijing Olympics and since he took over as Director, the truth is that there have been very favorable important changes. As far as rules are concerned, the amendments have been positive for the athletes.  At a technical level, the protector scoring system and the video replay have decreased the amount of claims. And the organizational structure makes communication much more easy and efficient because we always receive information from one person from the WTF and that person is the one who provides the information to all referees and coaches worldwide.  This fact guarantees no option to misunderstandings.

One of the premises in refereeing is that when you dress as a referee, the colors of your country´s flag should disappear.  What do you think of those referees who comment on social networks their country´s athletes’ progress or even show their support for them on the rest area?

Yes, referees should forget their nationality when working on an event.  They must be impartial and have no nationality.   They should not be aware of the nationalities or the names of the athletes whom they would referee because all are equal and athletes must prove their skills on the mat.  Referees have to keep in mind that all athletes have worked hard and sacrificed to get there, so all deserve the same treatment indiscriminately, regardless of their nationality. Referees must never express their support to a specific athlete, not in the rest area, not in the competition area not even in social networks.  That feeling must be internal, but never show it publicly.  This is the image that referees must show.

Through social networks we have noticed that many referees like to take selfies and post them on the accounts while they are on the rest area or they even ask their colleagues have their pictures taken while they are refereeing.  What do you think about this?

How do you want to close this interview?

Saying that we have to do the best for the athletes.  We, as referees, must put ourselves in the athletes ‘position.  They have worked and sacrificed a lot to get there.

If you do what you like and you even get recognized for your work, it’s an achievement.

Thank you!  It has been a pleasure and I want to take this opportunity to congratulate you for the great work they are doing to promote and inform on our sport. Thanks for taking me into account.