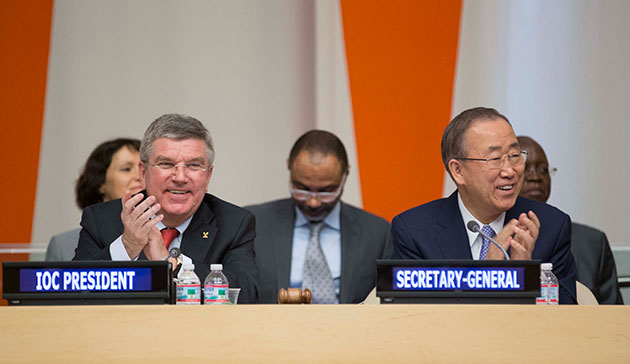 International Olympic Committee (IOC) President Thomas Bach today said the time has come for sport to play a greater role as a force for positive change around the world during a speech at the UN headquarters in New York.

His remarks were met with broad support from UN Secretary-General Ban Ki-moon and President of the UN General Assembly H.E. Sam Kutesa, who also spoke at the event, called “United Action Towards Sustainable Development For All Through Sport.”

“Sport has a unique role in society,” President Bach said. “Sport is the only area of human existence that has achieved its own universal law. The rules of sport are recognised and followed wherever sport is played. They are based on a global ethic of fair play, respect for opponents, tolerance and friendship. In sport all people are equal.”

The IOC President continued: “Sport and physical education programmes provide a strong incentive for school attendance and contribute to a broad spectrum of life skills. Sport teaches respect for rules and respect for others, tolerance, non-discrimination, team-building, communication, decision-making and problem-solving. It promotes self-esteem, personal responsibility and self-discipline. Active children are learning more effectively. Sport is not a distraction from education – it is an important part of education.”

The IOC President underscored how Olympic Agenda 2020, the IOC’s strategic roadmap for the future of the Olympic Movement, is driving change that is sending “a strong message that the Olympic Movement is ready to engage with society in new and more meaningful ways.” This includes a new global sustainable development agenda that will be finalized later this year.

“We are showing in a transparent way that more than 90 per cent of the revenues the IOC generates are distributed to the sporting movement and to athletes worldwide,” President Bach said. “This means that the IOC distributes USD 3.25 million a day, every day of the year, for the development of sport worldwide.”

The United Nations has long recognized the contribution of sport for development and peace, and collaboration between the IOC and the UN has played a central role in spreading the acceptance of sport as a means to promote internationally agreed development goals.

“Let us use sport to leave a transformative and sustainable legacy for our children and grandchildren.  It is sport’s motivational appeal that gives hope and helps improve the lives of many,” said the UN Secretary-General. “I sincerely hope that the Member States of the United Nations, while they negotiate to shape the future development agenda [see] the importance of sport, not only in health, but in peace and harmony, reconciliation, mutual understanding and respect for others, and fair games and rule of law and human rights – all these will be duly reflected so that we all can work together to build this world better for all, where all the peoples human dignity and human rights and happiness and prosperity and wellbeing will be respected.”

Ireland’s permanent representative to the UN, Ambassador David Donoghue, is one of facilitators in the negotiations for the development of the Sustainable Development Goals. He said: “It is clear that sport is a key contributor to many of the goals and targets of the MDGs. As we move towards agreement on a post-2015 Development Agenda, I hope that it will be possible to acknowledge in some way the role of sport in supporting development and peace.”