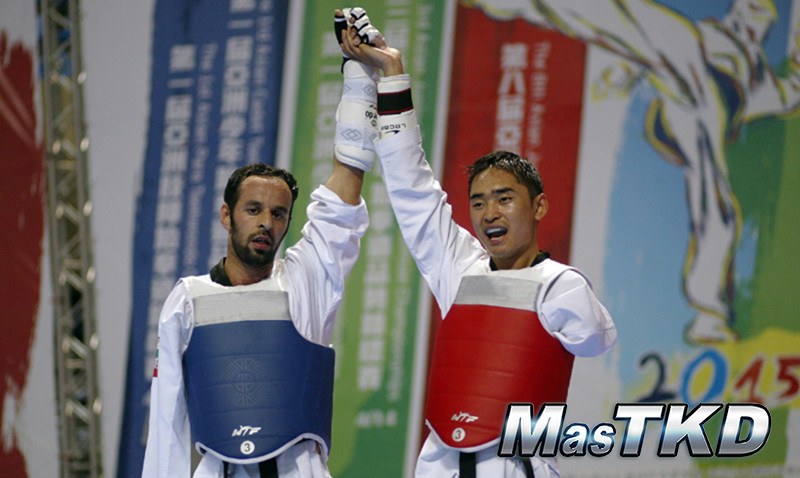 The inaugural Asian para-taekwondo event, which took place at the gymnasium of the University of Taipei, drew a total of 23 male athletes from 10 countries. The participating countries were Iran, Mongolia, Nepal, Korea, the Philippines, Uzbekistan, the United States, the UAE, Japan and Kazakhstan.

All athletes were winners. Fighting was fast and dynamic. Athletes unleashed volleys of kicks and punches to draw applauses from spectators.

In the male K42, -61kg final match, Mongolia’s Shinebayar Batbayar came from behind to beat Iran’s Ahmad Narimani 16-14 to earn his country the gold medal.

After the final match, Batbayar said, “Now my dream is to compete in the taekwondo competition at the 2020 Tokyo Paralympic Games for the gold medal.”

In the male K44, -61kg category, Mongolia’s Bolor-Erdene Ganbat brushed aside a stiff challenge from Korea’s Kook-hyun Han to win the final match 8-4 for the gold medal.

In the K44, -75kg division, Iran’s Mahdi Pourrahnama easily defeated the UAE’s Ali Mohammed Almahri 20-1 in the second round of the final match to earn his country the gold medal.

After the final match, Almahri said, “I am happy that taekwondo is on the official program of the 2020 Tokyo Paralympic Games and I want to compete in Tokyo for a medal.”

In the K44, +75kg category, Iran’s Asghar Aziziaghdam beat the United States’ Evan Medell 12-4 in the final match for the gold medal.

Besides the medal matches, there were three demonstration matches.

Classifications of athletes took place at the venue on April 15 and 16.

A KP&P protector and scoring system and an instant video replay system were used. The duration of each contest was three rounds of one minute and 30 seconds, with a one-minute break between rounds.

Modified competition rules were used at this one-day event. Kicks to the head were banned. Punches were allowed, but no points were given. A valid kick to the body earned an athlete one point and a valid turning kick to the body three points.