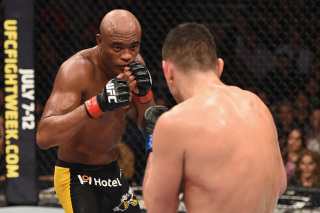 The former UFC middleweight champion, who happens to be a 5th dan black belt in taekwondo, issued a letter to the president of the Brazilian Taekwondo Federation (CBTKD), Carlos Fernandes, petitioning to compete at next year’s Olympics.

“Everybody knows that for a high-performance athlete, the Olympic Games is the dream of every athlete, and it wouldn’t be different with me,” Silva wrote, according to theCBTKD official website. “When I was named the ambassador of the sport by president Carlos Fernandes, this Olympic spirit motivated me. It will be a great pleasure to be part of this golden team, which has a serious institution, commanded by president Carlos Fernandes, who honors us very much, along with his team. Therefore, I wish to represent taekwondo and Brazil in the Olympic Games in 2016. With all my esteem, strength and honor.”

According to CBTKD, Carlos Fernandes will meet Silva to discuss this “magnificent possibility“.

Days before his rematch with Chris Weidman in 2013, “The Spider” spoke about the possibility of competing in the Olympic Games in Rio, but stated that UFC president Dana White pumped brakes on the idea.

Silva is currently suspended by the Nevada Athletic Commission after failing two drug tests earlier this year, days before and right after a unanimous decision victory over Nick Diaz. The UFC legend is expected to meet with the commission in May.