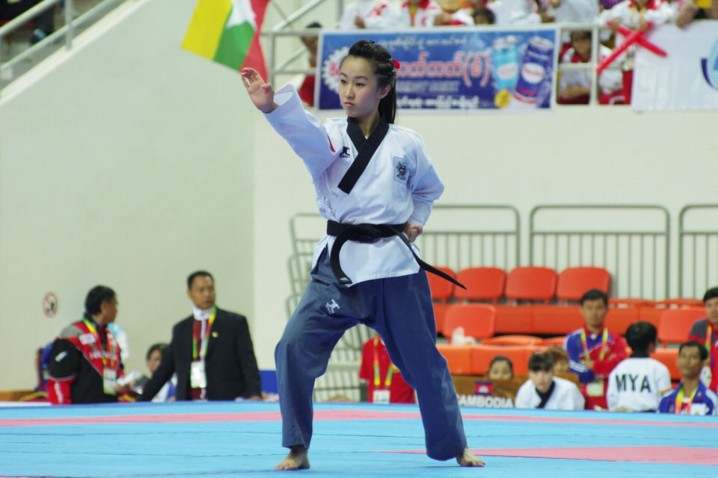 Many believed Chelsea Ann Sim was robbed of a gold medal at the 2013 South-east Asian (SEA) Games in Myanmar, when after putting in a solid performance in the women’s poomsae, she was controversially beaten to the top spot by local girl Yamin K Khine – who was clearly not up to the mark – which led to an outcry from the online community in Singapore.

If that bitter loss still stings, the 19-year-old does not show it.

All Sim wants now is to get that Gold when Singapore hosts the 28th SEA Games from Jun 5 to 16.

Not because she believes she can do it or the need to avenge that Myanmar defeat. Instead, it is to repay the faith shown by her family and the Singapore Taekwondo Federation (STF).

“My mother and grandmother are my biggest supporters. Since I will be competing in Singapore, they will come and watch me,” Sim says. “Everyone at STF has been backing me fully, and this will be the perfect time to return their faith in me.”

The Singapore Management University (SMU) business undergraduate knows that most of her regional rivals, including Yamin, are professionals who have made strides in their performance since the last Games.

However, Sim, who won the 2013 ASEAN Championship, is undeterred and despite having to attend classes at SMU three times a week, she has managed to squeeze in six days of training for the coming Games, where she is aiming to compete in the women’s poomsae, an event in which athletes perform an arranged sequence of techniques.

“I am not going to allow anything to stop me from getting Gold this time, and am giving 101 per cent in training,” She said. “That is how badly I want to win it in Singapore.” 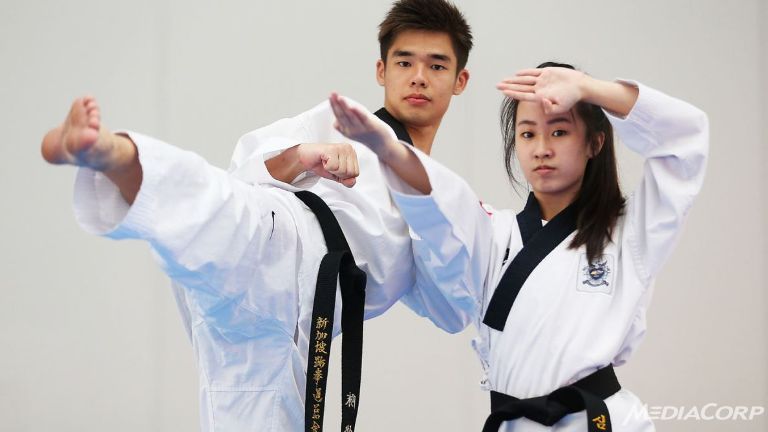 Tan:  “My goal is to reach final two”

Sim’s national team-mate Jason Tan is also aiming to better his performances in the kyorugi event, where he picked up bronze medals in the 2009 and 2011 SEA Games. The 24-year-old, who completes his National Service in May, trains four to five hours a day.

“With the kind of competition we are up against, my goal is to reach the last two. Once I’m in the final, anything can happen,” he said.

Sim is the only Gold prospect in the STF’s target of two medals, including a Bronze, for the four men and four women to the Games, the maximum allowed for nine taekwondo events.

“It is a conservative target. While we hope to deliver more, we don’t want to make promises we cannot keep,” said STF secretary-general and head coach Wong Liang Ming.

The STF receives annual funding of S$400,000 from Sport Singapore and raises another S$600,000 through sponsorship and other avenues.

Sim and team-mate Kang Rui Jie have entered for the mix pair poomsae and as they are deemed medal prospects, the STF received S$23,400 from Sport Singapore’s The Final Push scheme – reserved for 200 selected athletes across all sports – for their training. The STF also received S$24,000 for the entire squad from the Singapore National Olympic Council.

But Wong said the association’s hunt for medals is hampered by their athletes’ reluctance to turn professional. “Their priorities are to further their education and secure a professional career,” he said.“So when it comes to the Vietnamese who pay their taekwondo athletes to train full-time, or the Thais who can gather their student athletes to study at the same university and train, we are at a disadvantage.

“We can provide full-time training, but this is not an attractive option for taekwondo in Singapore.”