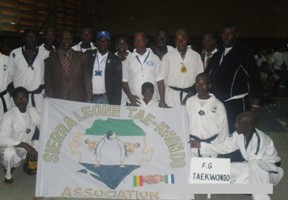 Even with the Ebola crisis the association is making inroads country wide so after the end of the Health emergency they will just continue from that point to push the association forward he said.

Oness stated that as an association they have a lot of challenges, which he is sure as an executive they will be successful in because they are committed to the work of the association.

He went further to appeal to athletes to be patient as the ebola crisis will soon end and they will continue with their usual training and competitions. He also advised them not to be complacent as the Ebola has not ended yet.

The Taekwondo President said in order to take the association to another level they have gone into agreement with EBURNE Construction SL to build a Multi-Purpose Sports Center in Makeni.

He said the agreement stated that the company will run the center for a period of time in collaboration with Taekwondo to get back their investment.

But in the case where the government, a business or individual may like to refund, the company will accept. The first party [Taekwondo] according to the agreement will provide the facilities in the development of the Sports Center which will have a Hotel, Dressing Rooms, Volleyball, Handball and Basketball Court.

The center will also have Security posts, Canteen, Car parks, Clinic Offices and a Gym for Taekwondo, Judo, Boxing and other fighting sports with offices.

The second party EBURNE Construction SL agrees to build the sports center and social complex that meet international standards. They will deliver the facilities at the time agreed by the two parties. The company will be financially responsible for the complete construction of the center.

After completing the center, they said it will be jointly run by the two parties. Taekwondo will start to do the payment after one year of test management. The company will have powers to exercise in accordance with this act or any other enactment; they will provide experts and recruit local workers for the construction.