Some European countries are struggling to solve internal conflicts of different nature, among them Belgium, Great Britain (Scotland´s membership revocation) and Sweden.  As informed last year by MasTKD, the Sweden Federation failed to comply with the WTF and ETU Statutes and was suspended by ETU and even from the WTF.

This problem directly affects athletes who are working hard to get a place at the Rio 2016 Olympic Games since one of the penalties imposed prevents Swedish athletes to get Ranking points until the situation is solved.

MasTKD and “Off the Record” talked with Elin Johansson, one of the best Swedish athletes in the Under 67kg weight category, No. 1 in the Olympic Ranking with  305.07 ranking points, Champion in the Grand Prix Final in 2014,  and most recently Champion in the Dutch Open. 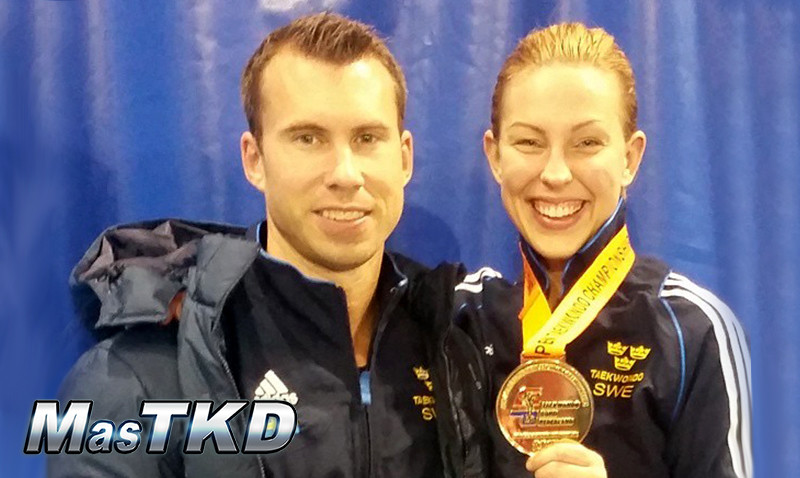 Elin, thanks for giving us your time.  How are you?

Everything is great! Especially after winning 5 fights and getting the Medal at the Dutch Open.

Winning this medal at the largest open in the world, is it a message for the WTF and ETU?

I truly hope they will decide that whatever the problem is, they shouldn’t punish us athletes. We are working so hard to reach our goals, we don’t earn a lot of money and since taekwondo is a small sport in Sweden this is affecting us in a very bad way. Not only the top ranked athletes but also the kids who are doing their best to become like their idols. I decided to go to Dutch Open to prove that a political war won’t stop me from bringing out my best performance and fight for my spot at the Olympic Games in Rio, even if I would gain the points or not. I just couldn’t sit home watching my opponents fight for the medals without me being there. Taekwondo is my job and it’s my passion and I will do whatever it takes to prove that I’m fighting for this sport and for my position in the ranking. I hope the WTF and ETU takes this as a massage and that they find another solution than punishing the athletes.

If you could have voice and vote, what would you recommend to solve this problem that is affecting directly to the Swedish athletes?

I don’t really know to be honest. A dream would be to put everyone’s weapons down and think of all the athletes who are affected by this and solve the problem in a smarter way, in a way that won’t affect our Olympic sport and our country. I don’t know what it takes. I just know this is not the smart way to do it.

If the suspension continues as it is now, they could leave out of Olympics  the Number One at the ranking…

That’s true and it’s would be a big scandal. Everybody who’s got the power to do something should really find another solution. Right now politics are stronger than passion. It’s so sad how people with too much power can destroy Olympic dreams and goals.

What would you do if they keep the suspension? Would you keep competing?

There is no point to spend so much time, money and effort if it’s not going to take me to Rio. I need the points as much as everyone else. I don’t know what I would do if they keep doing this to us. I love taekwondo and I love competing but my dream is an olympic medal and it would be too hard to put in all the work and all my heart into something that wouldn’t give me the points.

If they keep the suspension, would you consider changing  nationality as Aaron Cook did?

I’ve had that idea in mind. If that’s what it takes, then maybe I would consider it. Everybody would want to represent their own country at the olympic games. But if something is stopping me from doing that I might have to reconsider my options.

Any country in particular?

No, I still have a strong belief that someone will figure this out and put a stop to this.

Who is financing your competition expenses?  Do you have any financial support from institutions or sponsors?

I have support of the Swedish Olympic committee and my club. But the reason they support me this much is because we have a goal to go to Rio.

If you’re going to be the best you need to beat everyone. So there’s really no one I wouldn’t want to fight against. I think my division is very tough but I enjoy fighting strong opponents. It makes the win taste even better.

Now… moving to more informal things…do you have boyfriend?

I believe many people around the world will be jealous about that… Is your boyfriend from Taekwondo?

Would you like to thank someone, and add something else?

Of course I would like to thank my coach, Niklas Andersson, who always fights for me and supports me trough everything, in taekwondo and in life. And also my family and my team mates, they always keep me going and push me, in good times and in bad times.

Elin, thanks for your time and we wish you success in everything you do and we hope that the problem is solved soon.

I hope so, too and thank you very much for the interview.