With the intention of informing, with transparency, the whole Taekwondo community, about the situation of the Swedish Taekwondo Federation, the Secretary General of the European Taekwondo governing body , Michael Fysentzidis sporke exclusively with MasTKD .

Thank you Mr. Fysentzidis, for talking to us about the Sweden case. Can you explain to our readers what is going on with Sweden? 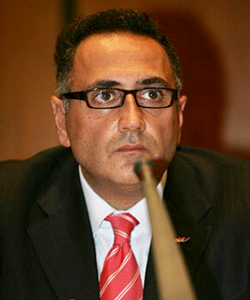 Thank you for giving ETU the opportunity to explain the situation with Sweden. I have to take the readers a bit back in time. In the beginning of 2014, ETU was approach by some clubs in Sweden with the complaint that the rules and regulations in the Swedish federation were not in compliance with the WTF and ETU rules and they felt that their rights were being breached. The complaint was that the representatives of the ITF section had the possibility of majority voting in their General Assembly and as well in the board of the WTF federation. After investigation, ETU concluded that this was indeed the case and the federation was requested to make the necessary changes in their statutes to make sure that they were in compliance with WTF and ETU rules and regulations. Now, almost one year later and after extensive correspondence with the federation, no changes were made in their statutes and ETU decided to suspend the federation. This was later ratified by WTF.

Is it true that the athletes cannot get ranking points now? You seem to punish the athletes?

Sweden did not make the necessary changes in their statutes. They are still at this time not in compliance with our rules and regulations. That is the reason the federation got suspended. This means that the federation does not have voting rights any more in meetings of ETU, cannot send national teams to competitions and the athletes cannot obtain ranking points. As soon as the federation is in compliance with WTF and ETU rules and regulations, the suspension will be lifted and all rights are invoked again. This includes also the ranking points for the athletes. For the time being, the athletes can only compete under the flag of WTF at international events. We are waiting for the Swedish federation to make the necessary changes in their statutes. As soon as the federation decides to do so, ETU will lift the suspension.

What changes does ETU need to see?

Sources told us that the Swedish NOC proposed these changes. Is that correct?

WTF announced that it will start to work closely with ITF.  Athletes can compete at each other’s events. Doesn’t this make the solution for Sweden easier?

It is important to understand that ETU supports the steps that WTF has made towards ITF for 100%. This being said, we also need to be clear. During the WTF General Assembly next month in Russia, we will not have ITF representatives voting in our General Assembly. We also have no ITF voting representatives in our WTF Council. For this, it is simply too soon. I think you should see the Sweden case in this perspective. We are open for cooperation with ITF, but we need to do this step by step. ETU will follow the leadership of WTF in this matter. For the time being, we continue to enforce our own statutes and rules and regulations.

Thank you, Mr. Fysentzidis, for your time to talk to us.