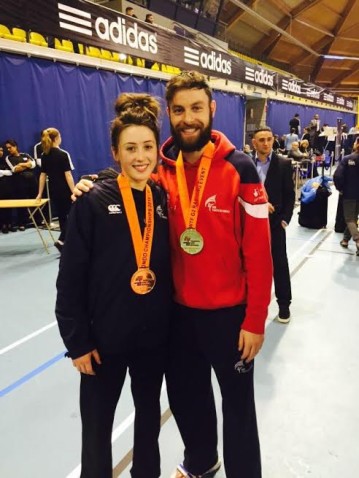 All conquering Jade Jones confirmed her status as the world’s most in form fighter by winning a sixth successive title at the Dutch Open in Eindhoven.

And Damon Sansum made it double gold for the Manchester trained GB Academy squad as he won a tough -80kg division including team mate Lutalo Muhammad and Isle of Man’s Aaron Cook.

For both Olympic champion Jones and happy Scot Sansum, victories earned them double ranking points in their final tournament before the World Championships in May.

Jones again kept her coaches and supporters on the edges of their seats in her latest -57kg showpiece final. Last weekend she came from 8-0 down to beat Sweden’s Nikita Glasnovic in the Swiss Open final.

This time the 21-year-old from Flint defeated a fast emerging rival five years her junior, Iran’s Kimia Zenoorin. Teenager Zenoorin won the World Junior and Youth Olympics gold medals in 2014 and underlined her star quality with a quarter-final victory over world number one, Eva Calvo Gomez of Spain.

But Jones, who celebrates her 22nd birthday later this month, refused to surrender her unbeaten record stretching back to last November with a 4-3 victory.

“I had five tough fights, especially the final,” said the London 2012 gold medallist. “But that’s six in a row now. Buzzing.”

Sansum’s second title of 2015 to go with his US Open crown came at the expense of Russian Aydemir Shakhbanov but only after a 14-13 thriller. However, silver medallist Shakhbanov enjoyed an excellent tournament, defeating Cook in the last eight before defeating Canada’s Christopher Iliesco in the semis.