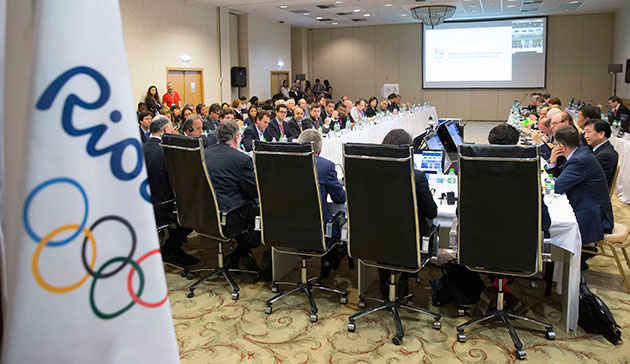 The International Olympic Committee (IOC) wrapped up a busy week of meetings today in Rio de Janeiro that included the eighth visit of the Coordination Commission for the Olympic Games Rio 2016, the first Executive Board meeting after the approval of Olympic Agenda 2020, and discussions between IOC President Thomas Bach and Brazilian President Dilma Rousseff.

The pair also discussed the positive legacies the Games will leave Rio and Brazil. The Olympic Games will provide new, much-needed infrastructure for Rio. This includes a new metro line that will link the regions of Ipanema and Barra. The improved transport system will benefit at least one million people in Rio. Previously, only 16 per cent of the population had access to public transportation in Rio. After the Games, that number is expected to increase to 63 percent.

The Games will also be inclusive. Hundreds of small businesses are being integrated into the Games and given access and assistance in the tender process for contracts worth more than BRL 3 billion. In addition, all of the 250,000 people who applied to be volunteers will receive English courses and training.

Rio 2016 will be the most inclusive Olympic Games ever with more than seven million tickets available, out of which 3.8 million will be sold for USD 30 or less. The cheapest tickets will be USD 15. On top of that there is a reduction for students and the elderly. Should they do so with a credit card, they can also pay in installments over a number of months, making it even more affordable. Many more Brazilians will have access to the Games as some of the events will be free to the public.

“There is really an impressive programme in place for engagement and legacies surrounding these Games,” said IOC President Thomas Bach. “The IOC EB discussed this in detail. The IOC wants to leave the Closing Ceremony not just saying goodbye and thank you. We want to leave knowing there is a great legacy plan in place for the Cariocas and for Brazil. We received excellent plans from the organising committee and public authorities to use the Games as a catalyst for social and economic development in Rio and Brazil. So for Rio we have many reasons to be confident and we are in fact inspired by the legacy project. On the other hand we have no reason to be complacent because we all know there is not a single moment to lose in preparations.”

During the IOC Executive Board, Members received a report on the finances of the Organizing Committee for the Olympic Winter Games Sochi 2014, which generated an operational surplus of RUB 3.25 billion (approximately USD 50 million) from the staging of the Games.

The IOC had already decided to transfer all its share of this total (RUB 650 million/USD10 million) to the Russian Olympic Committee for use in the development of sport, the Olympic Channel and an Olympic Museum in Russia.

In total, the IOC contributed USD 833 million to support the Sochi Games, an increase of USD 83 million over previous estimates. The IOC will contribute USD 1.5 billion to the success of next summer’s Olympic Games Rio 2016.

“This shows the commitment of the IOC to make Olympic Games feasible,” the IOC President said. “We do not go to host cities to create revenues for the IOC, but for the investment in the development of sport around the world. This is why we invest 90 percent or more of our revenues back into sport.”

The delegation from PyeongChang 2018, led by its Chairman Cho Yang-Ho, acknowledged the challenges they are currently facing in their preparations. The IOC EB offered its assistance wherever and however possible. This resulted in the establishment of an Integration Working Group to have key stakeholders around one table in PyeongChang to speed up decision-making processes and improve integration between all stakeholders.