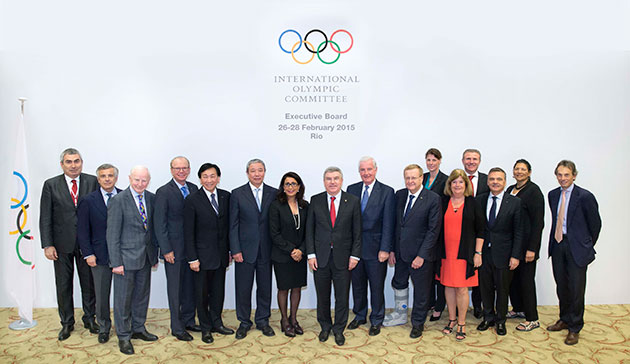 The Executive Board went through each of the 40 recommendations that make up Olympic Agenda 2020 and discussed their implementation, including timelines, costs, and the impact on human resources and the structure of the IOC.

The Implementation Plan focuses on timelines for 2015 but also gives some milestones beyond 2015.

Implementation of a significant number of recommendations began immediately after their adoption at the 127th IOC Session in Monaco eight weeks ago, with the first meetings taking place in December.

For the bidding process, the new Invitation Phase for the 2024 Games is already in place, starting on 15 January. This gives interested cities the chance to see how the Olympic Games best fit into their long-term social, sporting, environmental and economic environment. The EB heard today that a number of interested potential bidders had already taken advantage of the new phase.

Today, some new allocations have been made of the USD 20 million fund to protect the clean athletes. Decisions have been taken to fund better research in the fight against doping by having a fresh look at the testing procedures and sample taking. USD 2.5 million has been allocated to set up workshops, already beginning in April, for the prevention of match fixing, manipulation and related corruption in collaboration with INTERPOL.

The Executive Board established today the position of an ethics and compliance officer in the IOC administration.

Work on the organizational structure of the Olympic Channel is well advanced.  The management structure of the company was agreed today.  It will have a share capital of one million CHF. Hiring of key management positions on the channel will now go ahead.

The EB discussed the procedure and timeline regarding the composition of the Olympic sports program. Specifically regarding the addition of an extra event(s) to the program of the Olympic Games Tokyo 2020 from a Recognized International Federation, the IOC EB will approve a set of criteria at its next meeting in June. Tokyo 2020 will subsequently submit its proposal to the IOC in September 2015. The IOC Program Commission will then study the proposal(s) and make a recommendation to the IOC EB. A final decision is expected to be made at the IOC Session in Rio in 2016.

In the context of Olympic Agenda 2020 the EB agreed to three venue changes to the master plan for the Olympic Games Tokyo 2020. The excellent collaboration between the IOC and Tokyo 2020 to incorporate the spirit of Olympic Agenda 2020 into its plans for the Games has already resulted in savings of USD 1 billion for the Organizing Committee from the revised construction budget.

In its commitment to strengthen the support to athletes, the EB agreed to have a mourning place within the Olympic Village during the period of the Games in order to allow athletes to gather and pay tribute to people who passed away. It was also decided to devote a moment during the Closing Ceremony to remember the ones who died in the context of the Games.

“Participants at past Olympic Games have been affected by casualties and incidents back in their home counties,” said President Bach. “We want to give the athletes the opportunity to express their mourning in a dignified way and environment in the Olympic Village where representatives of the whole world are living peacefully under the same roof. At the Closing Ceremony, the Games come to an end and many people feel that it is a moment to remember people who have died at the Olympic Games.”

Going forward, each Executive Board meeting will now devote part of its agenda to the Olympic Agenda 2020 Implementation Plan to ensure proper follow-up and delivery.

Other recommendations have already been implemented. The IOC has included non-discrimination on sexual orientation in the 6th Fundamental Principle of Olympism.

The IOC has increased transparency, and will be audited according to enhanced International Financial Reporting Standards (IFRS), even if these higher standards are legally not required.