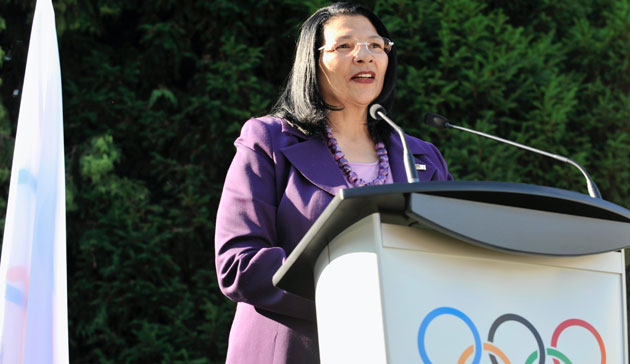 Following International Women’s Day on 8 March, Anita DeFrantz, Chairwoman of the IOC’s Women and Sport Commission and an IOC member, spoke at the 57th Session of the Commission on the Status of Women at the United Nations headquarters earlier this week to explain the role of sport in the vitally important effort to eliminate and prevent violence against women and girls in the world.

“Violence against women and girls is endemic to nearly all societies, and it takes many forms, both physical and psychological”, said DeFrantz. She added: “Violence is at the extreme end of a continuum that includes gender-based discrimination, taunts and sexual harassment. We cannot eradicate violence against women without eradicating the discriminatory attitudes that condone or even encourage it. Sport and its values are valuable tools to address and improve self-esteem, body control, leadership and assertiveness – all being elements which can contribute to tackle violence.”

DeFrantz also explained that sport itself may be affected by violence against women and girls: “Unfortunately, the world of sport is not immune to the problem that we are here to address, or to the behaviors that lead to gender-based violence. The IOC has been at the forefront of efforts to eliminate sexual harassment and sexual abuse in sport. Its commitment to this issue is fully aligned with the IOC’s belief that the practice of sport is a human right that cannot be denied on the basis of gender, race or sexual orientation. The Olympic Charter declares that ‘every individual must have the possibility of practicing sport, without discrimination’.”

DeFrantz concluded: “Sport has an important role to play in preventing violence against women and girls. It is not the only answer. There is no single solution to the pervasive problem of gender-based violence. Eliminating and preventing violence against women and girls will require deploying all available assets, including sport. It will require more cooperation and partnerships among individuals and organizations with a commitment to this cause. It will require assistance from governments and educational institutions. While being mindful of the many challenges that women face to access sport and to eradicate gender-based violence in sport, the International Olympic Committee is committed to this effort and will continue to work within sport, and with partners outside sport, to promote the cause of gender equality and eliminate sexual harassment, abuse and violence. Together, we can make a difference and provide a brighter future for our daughters, granddaughters and generations to come.”