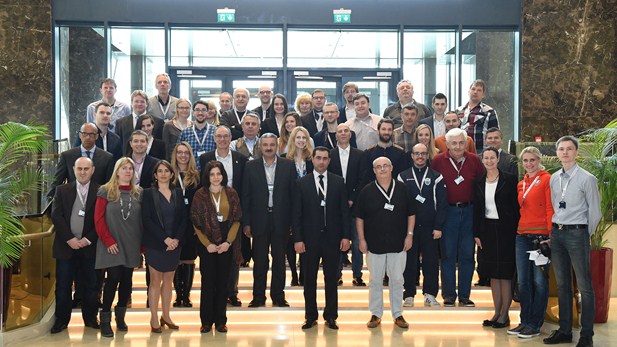 During a two-day programme, 54 delegates from around Europe visited Baku 2015 venues and attended a plenary session covering preparations for the European Games and Games-time media facilities.

Several Baku 2015 directorates made presentations to seminar participants, including senior staff from Press Operations, Protocol, Broadcast, and Communications. Delegates also celebrated the last Tuesday before Novruz, a traditional Azerbaijani holiday which marks the New Year and the arrival of spring.

Mr Simon Clegg, Chief Operating Officer of Baku 2015, said: “Strengthening relationships with communications teams from the National Olympic Committees and members of their media who will be covering the inaugural European Games is vital for us.

“The support and cooperation of National Olympic Committees is important in educating the continent about this new major event in the European sporting calendar, in helping to raise anticipation for the Games, and creating awareness of our work here in Azerbaijan.”

More than 1,000 journalists from across Europe are expected to attend the Baku 2015 European Games, along with communications officials from each National Olympic Committee. The accreditation deadline has been extended to Friday 3 April due to the high level of press interest.

Ms.  Jayne Pearce, Director of Press Operations of Baku 2015, said: “This is a valuable opportunity for us to brief European National Olympic Committees and media about the European Games, to ensure that they understand exactly how Baku 2015 will operate during Games time.

“We also have a chance to demonstrate how the I-Zone will work at Baku 2015. This is a new concept that will replace the Press Mixed Zone and Media Conference Room at venues during the Games.”

More than 6,000 athletes will compete over 17 days of competition this summer, with newspapers, websites, radio and TV stations all committed to covering the first European Games.

Mr. William Louis-Marie, Baku 2015 Director of Communications, said: “It is very important for us to ensure that the National Olympic Committees are fully involved with Baku 2015, and we are working closely with them in communicating all relevant updates and news to help make the first ever European Games a success.”