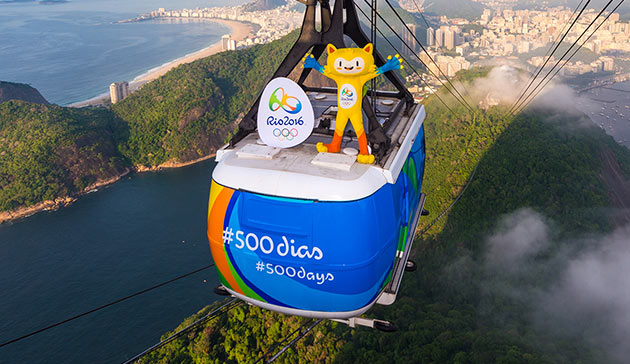 This will allow fans to begin planning their Games-time program ahead of the start of ticket sales. The first set of commemorative Games stamps for the 2016 Games was also launched and a 500-days-to-go page on Rio’s website lets us all join in by using the hashtags #RioOlympicDNA, #500days and #nowitshere.

The daily competition schedule shows Olympic fans which sports will take place on which days and gives them the opportunity to already start planning their Games-time experience. The Olympic Games Rio 2016 will officially begin on 5 August 2016 with the Opening Ceremony at the Maracanã Stadium, although the football tournament will get underway two days earlier. Six sporting disciplines will begin on 6 August, with all 28 sports holding their competitions over the following 16 days before the Games come to an end at the Closing Ceremony on 21 August. The full competition schedule with the specific session times will be published on 31 March, when ticket sales start for Brazilian residents. For fans looking to buy tickets outside Brazil, more information can be found on www.rio2016.com.

The first Rio 2016 commemorative postal stamps that were presented today will feature 10 designs representing nine Olympic sports – aquatics, archery, badminton, basketball, cycling, rowing, rugby, weightlifting and wrestling – and Paralympic athletics. In total, the full collection will feature 31 different designs reflecting the fact that Rio 2016 will be the Games of the XXXI Olympiad. The designs show athletes from each sport in motion and the background is formed by Rio 2016’s “Look of the Games”

Rio de Janeiro was elected on 2 October 2009 as the host city of the Games of the XXXI Olympiad at the 121st IOC Session in Copenhagen, Denmark. Rio was elected in the third round of voting, beating the cities of Chicago (United States), Tokyo (Japan) and Madrid (Spain). Rio defeated Madrid in the third round of voting by 66 votes to 32, with Chicago and Tokyo already having been eliminated in the first and second rounds respectively. The Rio 2016 Olympic Games will have 28 sports on the program and will run from 5 till 21 August 2016.