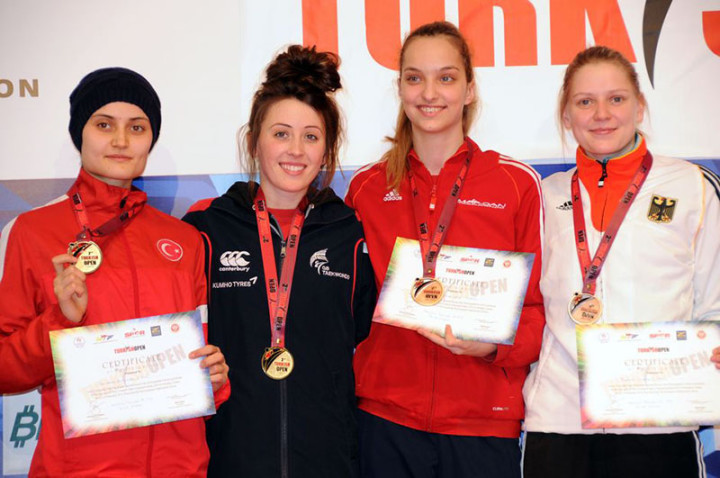 Olympic champion Jade Jones collected her second title of 2015 and her third in succession at the WTF Turkish Open in Antalya.

And teenager Christian McNeish continues to press for Rio Olympic qualification next year by securing a second gold medal for the GB Taekwondo squad.

Jones returned to competition four days after her victory in the European Clubs’ Championship and looked anything but Jade-d!

The 21-year-old from Flint, a winner of the World Grand Prix finals series in Mexico, met home favourite, Durdane Altunel, in the -57kg division final. And she silenced the crowd to take the title and more ranking points towards qualifying for the 2016 Rio Games.

McNeish from Plaistow only joined the GB Academy in Manchester last year after a career in kick boxing.

But the 17-year-old Londoner has quickly adapted to WTF Taekwondo and is proving a major player at -68kg despite competition from experienced team mates, Martin Stamper and Michael Harvey-both former world medalists.

McNeish, a Youth Olympics bronze medallist in 2014, gained a major senior success defeating Portsmouth’s Ben Haines to win the title. He qualfied for the final with a crushing victory over Germany’s Balla Dieye.

Haines, 20, who has previously fought at -74kg, was delighted with his breakthrough silver medal. His run to the final included victory over double European Championship silver medallist, Filip Grgic of Croatia.

This time Turk Kus turned the tables in the semi-finals before losing the final to Poland’s Aleksandra Kowalczuk. Southampton born Cater, one of the newest intake at the Manchester based Academy and a recent winner of the Bosnia Open, boosted the medal tally to five at -58kg.

Lutalo Muhammad and Damon Sansum were among the medals for a third successive tournament to boost GB Taekwondo’s final tally at the Turkey Open in Antalya. 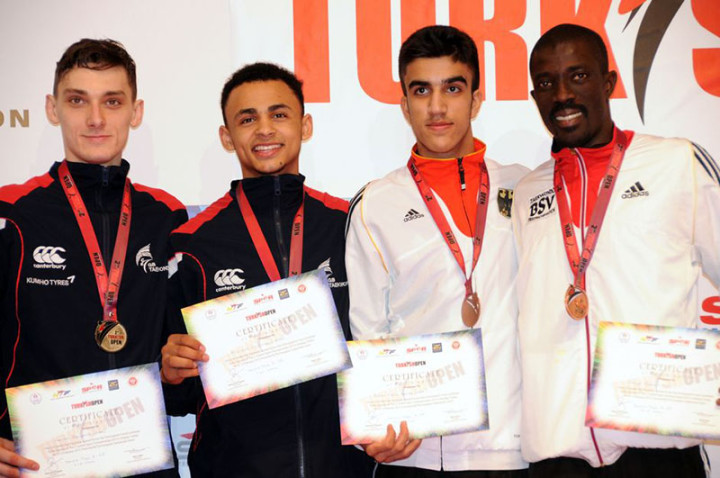 Muhammad fought his way through to meet Uzbekistan’s Jasur Baykuziev in the final and was unlucky to lose 4-3 against last December’s World Grand Prix series final champion.

“We saw some outstanding performances so it was a really good weekend,” enthused Hall. “Lutalo was so close in his final against a world class fighter.

“He has done a lot of solid work, he is making progress and improving as you can see by his recent performances.” The ‘Walthamstow Warrior’ has a gold and two silvers from his last three tournaments while busy Sansum has a silver and two bronzes.

Hall was also elated by Saturday’s performances of 17-year-old McNeish from Plaistow who overshadowed his senior GB team mates to win the -68kg title. “Christian took apart a world class field and three of his wins were by 12 point margins which just shows the type of taekwondo he is playing,” said Hall.

“It was a strong day for him while Jade is on song again with two tournament wins back to back.

“Our plan has always been to get as many ranking points as we can before the end of March and then concentrate on final preparations for the World Championships. That is the big target for us.

“Hopefully, we won’t be chasing ranking points later on in the year. Most of guys should have amalgamated enough so they can then concentrate on the Grand Prix series which this year is going to be more important than ever.”